Christie vs. Paul: Act One 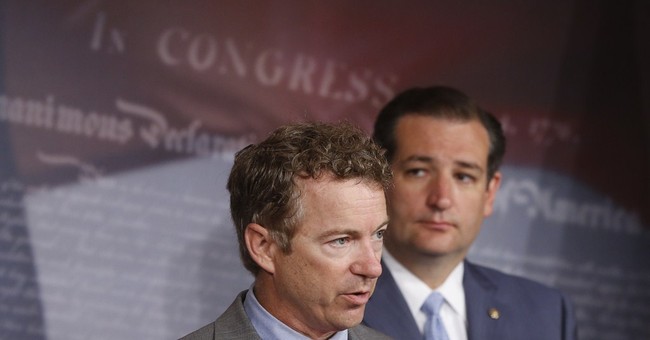 If the 2016 presidential election were an opera, Act One began last week with sparring between two of the leading GOP candidates, New Jersey governor Chris Christie and Kentucky Senator Rand Paul. The rift exposed a yawning ideological gap in the Republican party and raised questions about who is most likely to have a fighting chance against Hillary Clinton three years from now.

It all started when Governor Christie criticized Senator Paul's vocal opposition to warrantless federal surveillance programs, saying it hurt efforts to thwart terrorism. He even extended the invitation to "come to New Jersey and sit across from the widows and the orphans and have that conversation."

Senator Paul dismissed these attacks as "kind of cheap and sad" and suggested that if Governor Christie "cared about protecting this country, maybe he wouldn't be in this "'give me, give me, give me all of the money' [mindset] that you have in Washington."

The sparring continued as Governor Christie suggested that Senator Paul should "start cutting the pork barrel spending that he brings home to Kentucky.... And most Washington politicians only care about bringing home the bacon so that they can get re-elected."

All of these comments were made with the coming battle royale in mind.

The GOP establishment has come to Christie’s defense, even after many of its card-carrying members swore they would have nothing to do with the Governor after his embrace of Obama post-Sandy. They prefer his expansive vision of government, if only to keep their own nests feathered. They have no objections to warrantless wiretapping and drone strikes on American citizens. They deplore the rambunctious Tea Party strain that took aim at their privilege since 2010 and was embodied that year by the surprise victory of Rand Paul over their preferred moderate Trey Grayson.

Governor Christie is ensconced with the clueless consultant class, the same gurus and political geniuses who advised Rubio to torpedo his presidential campaign before it even started with an amnesty plan with Chuck Schumer.

Rand Paul is actually in line with the grassroots. The pols inside the Beltway may not see it coming, but the movement of libertarians and Constitutionalists is ascendant within the GOP. A candidate like Christie who describes them as kooky and as wishing more 9/11s on this country is a non-starter.

Paul also has no qualms about actually reducing the size of government. He has gone on the record by saying he will eliminate government agencies like the Department of Education. He even put forth an amendment as a freshman senator which would have cut the budget by $500 Billion.

On the other hand, we have Governor Christie. To his credit, he has been willing to take on the unions. That has been eclipsed in the minds of many conservatives by his troubling lobbying for and acceptance of the $60 billion Sandy Relief Bill, which was larded with pork for special interests. Never at any point could Governor Christie provide detail about where specifically that hefty sum of taxpayer dollars was going to go and how it would be accounted for -- and more to the point, how anyone who claims to be in favor of shrinking the scope of government could support such a legislative monstrosity.

Senator Paul argued for an incremental Sandy Relief Bill incrementally that would have ensured the money was spent responsibly and directly to the people who needed it most. Governor Christie missed an opportunity to show true leadership and stand up to President Obama as well as the big spenders in Congress and ask them to eliminate wasteful appropriations.

So instead he bullied Congress into passing a bill that included $10 million for FBI salaries, roof repairs at the Smithsonian, and $150 million for fisheries -- just to name a few. In all, it is estimated that around $1 of every $20 appropriated from the bill will be spent on pork projects.

People respond to ideas and arguments. Rand Paul has ideas. Chris Christie has gimmicks and a shtick that may win him views on YouTube, but ultimately one that is unsatisfying for millions of Americans tired of big-government Republicanism.