And Then There Was (Forty) One 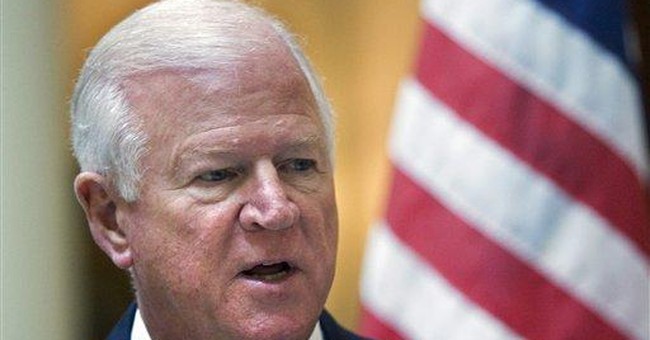 Election Day came and went, but the fight is not over. A run-off election in Georgia could very well determine Republicans’ ability to stave-off the disastrous legislation Democrats have promised to consider in the next Congress. I cannot emphasize enough the importance of this race to Georgia, as well as our nation. The stakes are high and there are some important things you need know about this election.

I have already discussed the disaster of an unchecked Democrat majority in Washington. Issues such as card check, the Fairness Doctrine and rampant tax hikes would breeze through Congress with little debate or amendment. These bills would be willingly signed by the former, liberalist Senator in Congress, President-Elect Barack Obama. Instead of rehashing these horror stories, I would rather educate you about Jim Martin, the man who could give Democrats their unchecked power if he prevails in the December 2nd run-off.

First, consider Martin’s opposition to punishing drug dealers near our children and schools. That’s right; Jim Martin opposed making it a felony to deal drugs near a school. This issue was so controversial in the statehouse, so polarizing that it merely passed by a 150-1 margin – with Martin as the sole opponent to protecting our children. Amazingly, this was the second time in less than a month that Martin voted against protecting our children. Earlier, Martin voted against the House version of this legislation; making him the only State Representative who twice opposed protecting school children from drug dealers.

Second, Martin’s record on taxes is both appalling and tragic. Consider his stated desire to raise taxes on people making less than $75,000 a year – he also would raise taxes on people making more than $75,000 as well. So if you make any money, Jim Martin wants to raise your taxes – be wary lemonade stand owners. Additionally, during his time in the State House, Martin voted for the largest tax increase in Georgia’s history and he has promised to be a rubber stamp for President-Elect Obama’s massive tax hikes. Not to mention Martin’s willingness to tax Internet sales and raise the corporate tax rate – not a smart move at any point, especially during an economic slowdown.

Third, aside from his desire to tax everyone and everything consider Martin’s lack of general economic acumen. Troubling at best are Martin’s statements claiming the middle class is a “state of mind”, not an economic reality. Now the painful reality is simple, if Obama and Martin’s tax priorities are enacted the middle class will be a distant memory for most Americans. Again, raising taxes on people and businesses will not solve the economic troubles facing this country. The reality is simple, lower taxes attract businesses, which generate jobs and money for the local economy. That is how to improve the current economic environment, not back-breaking tax hikes and the anti-business environment promised by Democrats.

Fourth, consider Martin’s opposition to making English the official language of Georgia. A common language does not indicate a move away from America’s traditional role as the melting pot, which has been a model to the world. Simply, it means we have a common language for government and business and a bond that unites us as Americans. For centuries, immigrants flocked to this country for a better life for themselves and their children. They wanted to be part of the American culture…to be Americans. They worked hard to immerse themselves in the culture and language without losing ties to their heritage. Lately that has faded as our country is willing to degrade our heritage and change our customs for our newest citizens and that cannot be allowed. We must continue to welcome in new citizens and respect different cultures, but we should not divide ourselves. Rather, we should stand together as one people with one language.

There are many more, but these are just a few of the reasons Jim Martin, as a Senator, would be a disaster for Georgia and this country. The stakes are high with only two Senate seats remaining undecided. Jim Martin could very well be the final key to unchecked Democrat control, which is something America cannot afford. America needs common sense legislators who will not cow-tow to Big Labor, stifle free speech and oppose the very business and trade we need to overcome this economic slowdown and emerge stronger than ever.