Scot Faulkner
|
Posted: Sep 02, 2016 12:01 AM
Share   Tweet
The opinions expressed by columnists are their own and do not necessarily represent the views of Townhall.com. 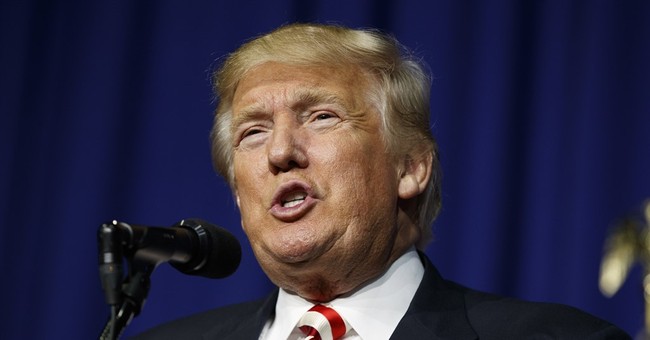 Why does The Washington Establishment hate Donald Trump? It is not because of his positions on immigration or trade. Pat Buchanan and Ross Perot advocated similar stands in 1992, and they did not generate the obsessive hatred being displayed in 2016.

Trump has declared war on The Establishment itself. In his June 16, 2015 Presidential announcement he asserted:

“So I’ve watched the politicians. I’ve dealt with them all my life…. They will never make America great again. They don’t even have a chance. They’re controlled fully by the lobbyists, by the donors, and by the special interests…. It’s destroying our country. We have to stop them, and it has to stop now.”

So in a nutshell, The Washington Establishment has a visceral hatred for Donald Trump, because he promises to put their system out of business.

The Washington Establishment sees Trump as serious about them being the primary impediment to making America “great again.” He sees The Establishment as lining their pockets, and their friends’ pockets – as beneficiaries of the status quo. As long as nothing changes, The Establishment will have their mansions, limousines, VIP tables and ego trips.

There is much at stake.

In fact, the treats are almost always handed out to friends, and friends of friends. Friends can be purchased. Friends help friends get reelected, and gain power, and get treats. It is Washington, DC’s “golden rule” – those with the gold rule.

Welcome to “crony capitalism”.  Someone knowing someone who can hand out favors has been around since the first tribes shared the first harvest. The term “lobbyist” came from favor seekers hanging out in the lobby of Washington, DC’s Willard Hotel during the Grant Administration in the 1870s.

In 1905, George Washington Plunkett, a ward boss in the Tammany Hall political machine, coined what could be the motto of Washington, DC: “What is the Constitution among friends?”

Today, things have gotten way out of hand. Spending for Washington lobbyists has tripled since 1998 to over $3.22 billion a year. Favor seekers spend $24 million on lobbyists each day Congress is in session.

Campaign fundraising is another dimension of how The Establishment stays in power. Over $750 million has been raised for House races and $520 million for Senate races this election cycle. Leaders of Political Action Committees (PACs), and individual bundlers who raise funds, dominate this ultimate game of “pay for play.”

Those brokering power become gatekeepers for funding and favors throughout the Federal Government. This power comes from a truism overlooked by everyone in the media: all discretionary federal money is earmarked. The popular myth is that earmarks vanished once the Republicans banned them when they returned to power in 2011.

In fact, they only banned legislative earmarks, and there are still ways to work around that system. The President, and his appointees, earmark funds as standard operating procedure.  Even career bureaucrats play favorites.

Favorites can be based on institutional, Administration and ideological biases. Favoritism can also go to the highest bidder. This is federal money flowing out the door as grants, programs, contracts, buildings, leases and employment.

Other “treats” to be dispensed include regulatory relief, tax waivers and subsidies. Favoritism is rarely purchased with money directly changing hands; that kind of corruption occurs more in state and local government. Washington level corruption is true “quid pro quo.”

The Washington Establishment swaps favors more insidiously. How many times does a military officer get a major position with a defense contractor years after he favored them with a multi-million dollar contract? A Reagan aide granted a building height waiver near the White House and quadrupled his salary when hired by the developer.

Grant and contract officers obtain slots at prestigious colleges and prep schools for their children for making the “right” choices or being a little lax on oversight.

Bush era National Park officials refused to prosecute the destruction of park land in exchange for Redskins tickets. Obama era Fish & Wildlife Service officials give wind turbine companies 5- and 30- year exemptions from endangered species and eagle protection, so they can slaughter eagles, hawks, falcons, other birds and bats by the hundreds of thousands year after year – while “commoners” get fined or jailed merely for “possessing” a bald eagle feather.

Hillary Clinton gets exonerated from a host of transgressions, in exchange for who knows what.

Everyone has their price, save for “true public servants.”

Trump promises to smash the cookie jars and end the reign of The Establishment.

Normal Americans are rallying around Trump. They are enraged at the lies and duplicity of those in power. Many see a reason to vote for the first time since Reagan. They want November 8, 2016 to be America’s “Bastille Day,” marking the end of Washington, DC’s arrogant and unaccountable ruling class.

Billions of dollars are at stake. Perks, prestige and power are at stake. The future of representative government is at stake. Is it any wonder that The Establishment is doing everything and anything to stop Trump?

Scot Faulkner served as the first Chief Administrative Officer of the U.S. House of Representatives and on Reagan’s White House Staff. He advises global corporations and governments on strategic change and leadership.