Saul Anuzis
|
Posted: Jul 03, 2018 4:45 PM
Share   Tweet
The opinions expressed by columnists are their own and do not necessarily represent the views of Townhall.com. 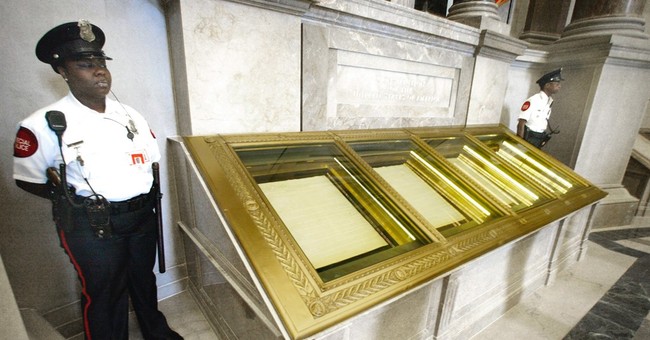 President Trump pointed out in an April 26, 2018 Fox & Friends interview, “I would rather have the popular vote…the Electoral College is set up perfectly for the Democrats…they should never lose the Electoral College.” If you listen to some conservative political pundits, reforming our system for electing the President by a national popular vote is a progressive boogeyman hiding in the closet. They would have you believe it is a proposal that will eviscerate the U.S. Constitution and destroy the cherished principle of federalism.

These are myths and scare tactics used by opponents of the National Popular Vote.

Let me address some of these recent myths.

Most recently passed by Connecticut, the National Popular Vote is the constitutionally appropriate way to preserve the Electoral College and to make every voter, in every state, relevant in every presidential election. The National Popular Vote does NOT amend the U.S. Constitution. The National Popular Vote does NOT get rid of the Electoral College. The U.S. Constitution (Article II, Section 1) gives states exclusive control to award their electoral votes: “Each State shall appoint, in such a Manner as the Legislature thereof may direct, a Number of Electors…” The current system of state winner-take-all laws used in 48 states is not the Founders’ system. Winner-take-all laws were not debated at the 1787 Constitutional Convention. Over 22 days and 30 votes on how to elect the President, not one vote was taken on state-based, winner-take-all laws. The Federalist Papers did not opine on winner-take-all laws. The Founders’ system – the United States Constitution – grants state legislatures plenary power to determine how each individual state awards their electors.

How is it that state legislatures, discharging their constitutionally mandated duties, are a danger to federalism? In reality, this is federalism in action. According to the former ALEC chairs, “The right of states to control their electors in a manner prescribed by their own state legislature is arguably one of the most important authorities granted by the U.S. Constitution.” The National Popular Vote is doctrinaire federalism.

Here is how the National Popular Vote interstate compact works. The National Popular Vote interstate compact would not take effect until enacted by states possessing a majority of the electoral votes – that is, enough to elect a President (270 of 538). Under the compact, the national popular vote winner would be the candidate who received the most popular votes from all 50 states (and D.C.) on Election Day. When the Electoral College meets in mid-December, the national popular vote winner would receive all of the electoral votes of the enacting states. Currently, the bill has been enacted by 12 jurisdictions possessing 172 electoral votes.

·The National Popular Vote is a bipartisan reform of our presidential election system.

·The National Popular Vote is the constitutionally appropriate reform.

·The National Popular Vote preserves the constitutional principle of federalism.

I believe we are a center-right country and I look forward to taking our conservative ideas to the nation. We will win our share of battles with facts as opposed to the rhetoric and scare tactics of our opponents.

Let’s move past the myths and rhetoric. Let’s not rely on scare tactics and apocalyptic predictions about the Electoral College. Instead, let’s have an informed debate based on facts.

We can and should reform the way we conduct presidential elections.

Let’s make every voter, in every state, relevant in every presidential election. Let’s adopt the National Popular Vote.