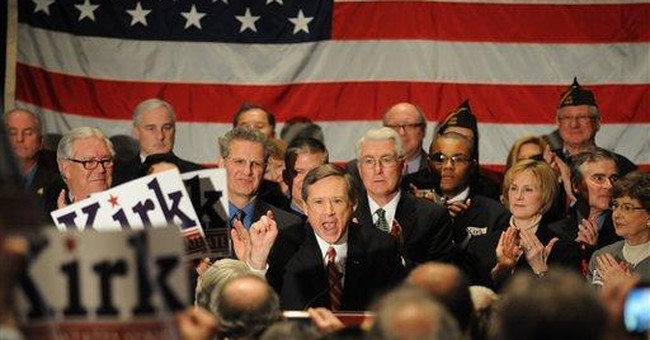 What happened in the Illinois Senate race doesn’t exactly mirror Massachusetts. But in one important way the races were the same: Both candidates ran to the right. Scott Brown, a moderate on social issues, spoke passionately for national security and against the Obama Healthcare legislation. He spoke of favoring parental notification for minors and prohibiting partial birth abortion. In the first state to allow it, he firmly stated his opposition to gay marriage and his support for second amendment rights.

By contrast, Mark Kirk refused to debate his opponents, and never had to answer for his vote against the ban on partial birth abortion, his sponsorship of Hate Crimes, his opposition to enhanced interrogation methods and support of limiting intelligence gatherers to the Army Field Manual. Nor did he speak of his opposition to the surge in Iraq or his D rating from the National Rifle Association.

Instead, Kirk, in carefully controlled environments, chose to present himself as a conservative by attacking the Healthcare Plan. Because he wouldn’t debate and because his opponents were under-funded, no one was able to get the word out that Congressman Mark Kirk is a radical on social issues and the environment with more in common with President Barack Obama than Scott Brown.

Now the media and the mainstream Republican Party is characterizing Kirk as “moderate.” Kirk ran to the right. He was a war hero (just not one who supported the Iraq surge). He was fiscally conservative (it’s just that he voted for Cap and Trade and an abundance of earmarks for donors).

Enter the opposition: Five candidates who split the conservative vote. How did that happen? It happened because conservatives in Illinois would rather contend with each other than work together. In recent years there is one clear example when they have worked together—in 1998 when, with their combined strength, they managed to elect Senator Peter Fitzgerald.

This race was no exception. A search began to find a strong candidate long before the wave of opposition to the administration. When the conservative movement was being declared “dead,” no one was exactly stepping up to the plate. Virtually all the pro-family leaders in the state found and vetted a young attorney and developer named Patrick Hughes.

Another group of conservatives felt like they had been left out of the process. They grumbled and objected and dampened the momentum considerably from the very beginning. A gadfly candidate sabotaged a huge fund-raising potential for Hughes by accusing him of being racist. That was how the Hughes campaign began.

In spring and summer the Tea Party movement began to form and grow. Initially Tea Partiers were enthused about Pat Hughes. Many endorsed him but about ten days before the race others began to push for a downstate judge named Don Lowry. They were sure they could pull it off for the judge in spite of the timing. With nine days to go before the race, Phyllis Schlafly and I—with other leaders of the pro-family movement—sent a letter imploring the other four candidates to drop out of the race and throw their support to Patrick Hughes. Rasmussen was reporting that Hughes was the only one with any chance of winning, and it would still be an uphill battle. All four refused.

So on Election Day, the extremely liberal Mark Kirk won 57 percent of the vote to Patrick Hughes’ 19 percent and 24 percent split between the other candidates.

Illinois is big and divided. Massachusetts was small and united. Scott Brown ran as a conservative in a liberal state…. Mark Kirk did the same. One was willing to defend his positions, the other never had to. Only time will tell how either of them represent the Republican Party in the future, but one thing is for sure. With the allegedly mob-connected Alexi Giannoulias as Democratic nominee for Senate in Illinois, conservatives here are going to be faced with a Sophie’s Choice.