Coronavirus Even Closed the Waffle House

Salena Zito
|
Posted: Mar 31, 2020 12:01 AM
Share   Tweet
The opinions expressed by columnists are their own and do not necessarily represent the views of Townhall.com. 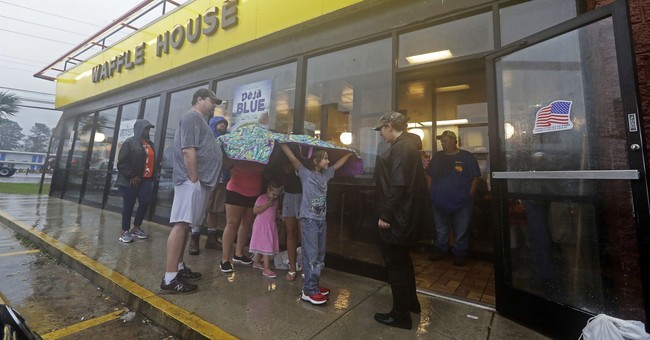 CHAMBERSBURG, Pennsylvania -- It is early Sunday morning along one of the few congested stretches of the Lincoln Highway when an empty parking lot below the familiar cheery yellow sign for the local Waffle House catches the eye.

The 24-hour diner chain, born in the Atlanta suburbs 65 years ago and now spreading across 25 states with nearly 2,000 locations, is primarily known for its ability to serve as a touchstone in every community it serves. It feeds a cultlike following among foodies and road warriors.

But it is also known for another remarkable distinction: It closes for no disaster.

Yet at store No. 1673, the doors are now locked. It is one of 418 diners the chain has closed, an announcement made through social media last Wednesday with the hashtag #WaffleHouseIndexRed. The reference is to the Waffle House Index, an informal metric created by the Federal Emergency Management Agency as a measure of the effect a natural disaster is having on a community. A green index means full menu service. Yellow means services have been limited. Red indicates closures -- a major disaster. A whole bunch of Waffle Houses including this one hit red on Sunday due to the novel coronavirus.

The shuttered doors along the first coast-to-coast U.S. highway tells you everything about the state of things. The coronavirus' spread is likely to get worse in the coming weeks before it gets better -- before we get better.

No matter where in this country you walk into a Waffle House, whether in the diner's home state of Georgia, here in Chambersburg or in Clark Summit, Pennsylvania, without fail you can expect a cheerful hello at the door, a jukebox at your table, no-frills seating and the nostalgic scent of frying oil for the hot irons. The waitstaff will definitely call you "honey," and, of course, you'll hear orders shouted to the kitchen in the diner's distinct hash brown lingo.

When your waitress shouts, "Scattered!" that is someone's hash brown order, meaning they are all spread out on the grill so they get nice and crispy. "Smothered!" means someone ordered theirs covered in onions. "Peppered!" is a nice dousing of jalapenos. "Covered!" means melted American cheese on top. And "Country!" of course, means it's doused in sausage gravy.

Waffle House was founded in 1955 by partners Joe Rogers and Tom Forkner. Both men died in their late 90s in 2017, just more than a month apart. The privately held company is now headed by Joe Rogers Jr.

The Waffle House is a lot of things to a lot of people: It is where the regular guys or gals go after a long Saturday night on the town, and where they go back to on Sunday morning after seeking redemption for Saturday night at church.

It is a night out for a family of four; the beacon on the highway for the hungry long-distance driver; the place where you and your friends went after the prom; and maybe where you or your child had his or her first job.

You are never alone at the Waffle House, even if you spend your time contemplating life, staring at the white subway tiles trimmed with black diamonds on a yellow background. In normal times, the odds are good that you'll walk out with three new friends and hope for the future. But not now.

Njeri Boss, the director of public relations for the chain, said in a statement that the closures were all related to COVID-19. "We referred to the index as a way to help people understand how big of an impact this virus has had on the restaurant industry," Boss said. "With so few customers visiting our restaurants, we are rapidly losing the ability to offer enough work hours for our associates to earn money needed to live their lives and pay their bills. Hardest hit so far are our restaurants in the Midwest and along parts of the Gulf Coast."

The closure of store No. 1673 here in Chambersburg is listed online as temporary.

America's idea of normal is like listening to an old folk song. It is filled with all of the sounds that make up our heritage -- the banjo from Africa, the fiddle from Europe and the gospel sounds from the mountain people who first carved out the frontier.

The lyrics are the stories we tell when we sit at the Waffle House counter alone and together as the jukebox plays.

We all come from a different place, but we all end up at the same destination, usually at places such as this diner. When our cathedrals are locked, we worry and wonder if we will ever get back to our idea of normal.