Salena Zito
|
Posted: May 28, 2019 12:01 AM
Share   Tweet
The opinions expressed by columnists are their own and do not necessarily represent the views of Townhall.com. 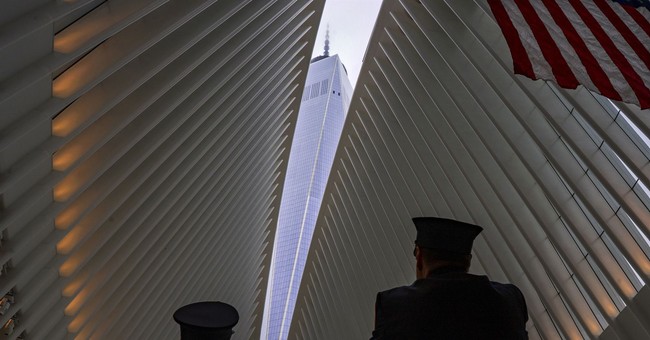 No matter where you lived in America on the morning of Sept. 11, 2001, the story often begins with a sapphire sky filled with airy, white clouds that perfectly contrasted against the expansive blue, a picture-perfect backdrop shattered by the deadliest attack on American soil in the country's history.

Nineteen men trained by al Qaida boarded four passenger aircrafts that morning, seeking to carry out a devastating coordinated attack aimed at symbols of American freedom: the World Trade Center, the Capitol and the Pentagon. Three hit their target. Flight 93, the plane targeting the Capitol, crashed in an isolated field in Somerset County, Pennsylvania, thanks to brave passengers who wrested control of the plane from the hijackers. Almost 3,000 people lost their lives that day, 400 of whom were New York City's first responders.

Taylor Cleveland and Victor Lewis are two people whose lives were changed by the terror attacks. They were separated by geography, age and life experience, but for them, 9/11 proved to be a common call of duty to serve their country. The Washington Examiner spoke with them about their service.

He says: "Even my priest growing up was a chaplain in World War II. I mean, everybody around here served. It's just expected that's what you're going to do."

Unfortunately, he couldn't follow in the footsteps of others. He had been a local high school football star and had wrecked his knee during a game, so the Marine Corps turned him down. Instead, Cleveland turned to community service, earned a degree in criminal justice and then worked as an emergency medical technician, a firefighter and then a beat cop before joining the department SWAT team.

But he knew he had to do something more after the 9/11 attacks.

He says: "My grandfather joined the Navy the day after Pearl Harbor in 1941. And I just knew after that there was no way they would keep me out of this war that was coming. There was no way that people were going to go fight a war for me and that they were going to put their lives on the line for me. I could never live with myself as a man if I didn't go and let somebody else go fight my battles for me."

He signed up to join the Marine Reserves but had concerns about his knee injury.

"I figured that because I had the knee problem still, they'd still turn me down," he recalls. "Well, they enlisted me before the medical portion, and they called the house and left a message on the machine that said, 'Good news, you're approved.'"

Lewis and Cleveland met in Buffalo, New York, in 2003. Cleveland is 3rd Battalion, 25th Marines. Lewis, a Navy hospital corpsman, was attached to the Marine unit. The two became like brothers immediately.

They deployed to Iraq in 2005. Cleveland admits he had a hard time adjusting at first: "I was friends with a fellow reservist by the name of Jeff Wiener who had joined the Marines right out of high school. Wiener's got this book, and it's got a picture and a story of every person that was killed in 9/11, and I'm like, 'What are you doing, bro?' He smiles at me, and he's like, 'Man, I just read this whole book. I can tell you what, I read every single person that was in here that died on 9/11. I know why I'm here.'"

Twenty minutes after that conversation, Wiener was fatally shot in the head. Cleveland recalls, "That's the last conversation I had with him. Having him say, 'Man, I know why I'm here,' is the best gift I've been given."

Lewis says he never got shot in Iraq. No mortar. No shrapnel.

Cleveland practically spits out his beer as he says, "Dude, you were hit by a rocket!"

Lewis is sheepish and uncomfortable telling the story. Deployed south of Haditha, just outside Haqlaniyah, the engagement turned deadly as a guy coming straight at Lewis fired off a rocket-propelled grenade.

He explains: "The blast throws me toward the river. Trying to shake it off, I grab my weapon. I'm trying to fire back. I'm crawling toward the river. I go to stand up and fall back down. Like, 'What the f---?' My leg's all mangled."

He was medevaced to Al Asad Air Base and then took a Black Hawk to Basra. From there, he was transported to Ramstein, Germany, and finally, Bethesda, Maryland. He wanted a little Motrin and to go back to "his men," but they told him he was going home.

"I felt like I failed them, you know? Because nobody could take care of my men like me," Lewis says. "They're my boys. We hung out. We partied. We kicked it. We shared everything. I wanted to go back."

That's the hardest part of returning to civilian life. "I think about it all the time," he says. "But you know ... you can replay it as many times as you like in your mind. The result's the same."

Lewis is blunt about his routine after leaving the military: "hanging out, drinking and chasing women."

He finally went back to work at the fire department, but even working triple shifts couldn't fill the void left by having to do something other than what he saw as his purpose in life.

He sought help from the Department of Veterans Affairs and got lost in the system. Lewis says, "I started snapping at people and flipping out over nothing, but that's not me. I was looking for help."

It all came to a head one evening outside a bar when he was approached by two men and a woman looking for trouble. They pummeled Lewis pretty badly; he fought back with a knife.

"People got hurt," is all he says. The price? Thirty months in prison.

But he turned his life around. He gets treatment for his post-traumatic stress disorder, has a job he loves at a contracting company and takes care of his twin boys. He talks to Cleveland at least twice a week and is working toward his degree in electrical engineering.

Lewis earned a Bronze Star, and Cleveland a Purple Heart. The lesson they want people to remember is simple: American freedom is paid for a thousand different ways.