Salena Zito
|
Posted: Apr 16, 2019 12:01 AM
Share   Tweet
The opinions expressed by columnists are their own and do not necessarily represent the views of Townhall.com. 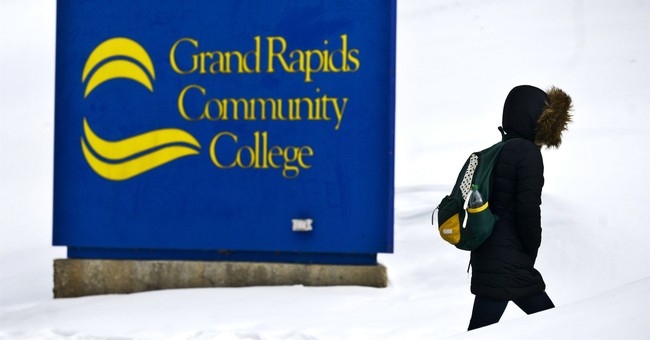 PITTSBURGH -- When the Pittsburgh Pirates opened their season two weeks ago at PNC Park, Nathan Sibley, a York County, Pennsylvania, kid who struggled in high school and subsequently stood little chance to attend a four-year college had earned the job for the major league club that nearly every fan in the ballpark pays attention to.

"I am the captioner for the Pirates for the JumboTron," Sibley said.

He earned the job after he interned for the Pirates last summer through a program at the community college he attends.

It's a dream come true for a student who did not make great grades in high school but had a real talent he was unsure what to do with: typing very fast.

"I initially thought IT programming might be the way to go, but I found I didn't care for that. Then a teacher suggested court reporting. There weren't many options out there until I saw what CCAC had," Sibley said of Community College of Allegheny County, where he will be graduating early from in May.

Every year, more than 25,000 students enroll at that community college in the greater Pittsburgh area, picking one of more than 150 degree, certificate, diploma or transfer programs. On top of that are the thousands more who take workforce development courses at the school.

In a city that boasts six major universities within its city limits -- University of Pittsburgh, Carnegie Mellon, Duquesne, Robert Morris, Chatham, Point Park, and Carlow -- those are impressive numbers.

While enrollment at community colleges is down across the country, despite the dramatic cost savings of beginning there and either transferring or going straight into the workforce with an associate degree, the benefits schools such as Community College of Allegheny County have are immeasurable, not just for the students but also for the communities they serve.

A student pays $110 per credit here at the school, compared to around $800 at University of Pittsburgh or $1,406 at Harvard University. On average, student borrowers in higher learning institutions outside of community colleges owe $28,650, according to the nonprofit research and advocacy group Institute for College Access & Success.

The cost of higher education became a political football in America since 2016, when Sen. Bernie Sanders, I-Vt., made free college the core of his Democratic presidential primary campaign. His 2020 rivals have jumped on the bandwagon.

These schools help students such as Sibley find their niche, and they provide opportunity for students who weren't ready to put themselves or their parents in debt.

"I didn't really know what I wanted to do," Alex Lopez, 23, told me. "I was trying to figure out what I actually wanted to do. I'm like, 'Let me go give computer science a try.' Well, I gave it a try, and it really wasn't for me. I had a teacher tell me, 'Why don't you go into teaching?' I'm like, 'Sure, why not?' And I just set it off from there."

It was his parents who urged him to start his journey as a teacher at a community college.

"And I wanted to, to be honest. I didn't want to break their bank," he said of attending a larger university.

Lopez, who is half black and half Latino, decided teaching Spanish would be a natural fit for him. "Half of my family is fluent in Spanish," he said.

There's more. A community college often makes itself an integral part of its community. "We (are) situated inside of a community," Community College of Allegheny County President Dr. Quintin B. Bullock says, "and most of the time individuals who choose the community college as their point of access of higher education and workforce training, they are making a commitment to stay in the community."

Ninety-four percent of that university's students remain, live and work following graduation, Bullock says. "That affirms the importance of the community college."

While the majority of students in the other universities in the city leaves the region after graduation, a system of higher education that is affordable and retains the graduates locally, making the community younger, smarter and stronger, has to be better part of the national conversation as a solution for a variety of societal problems.