In a Political World Gone Topsy-Turvy, Mike Pence Is the Party Leader

Salena Zito
|
Posted: Dec 05, 2017 12:01 AM
Share   Tweet
The opinions expressed by columnists are their own and do not necessarily represent the views of Townhall.com. 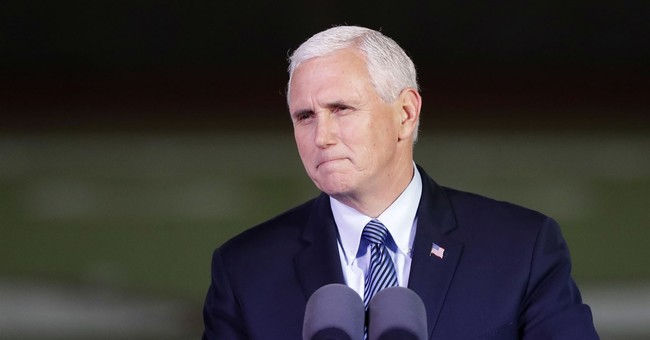 NEW YORK -- When President Donald Trump shook the political world, the epicenter was Pennsylvania, the one swing state Republicans had tried and failed to carry in each of the last six presidential elections. The flamboyant businessman targeted Pennsylvania from the start and addressed the Pennsylvania Republican Party's signature fundraising event in Manhattan exactly two years ago this week.

Last Friday, the Pennsylvania Society reconvened in New York City, but this time, it was Vice President Mike Pence who was scheduled for the slot of keynote speaker, a role Pence has accepted with vigor across the country since taking office.

Although his speech was cancelled at the last moment, it was estimated his planned appearance still raised nearly half a million dollars, a number essential for a state party apparatus that not only helped place him and the president in the White House but also is bracing for big in-state midterm elections next year for governor and U.S. Senate and to hold all 13 of their GOP House congressional seats.

Pence's appearances across the country are notable for several reasons, but not because they're a sign that he's preening his own political ambitions or creating a shadow campaign as other news organizations have reported. Pence's appearances are significant because he has unofficially taken on the role as the leader of the Republican Party.

"Without question, Pence has absolutely taken on the traditional role as leader of the Republican Party. The mistake is made when people reference his out-front fundraising activity as a lurch for personal gain," said Rob Gleason, former chair of the Pennsylvania state GOP. "They could not be more wrong." Gleason took a lot of personal heat when he invited Trump to headline the party's fundraiser in New York in 2015.

"Trump is Trump, and part of his uniqueness in American politics is that he is a completely different kind of president in terms of his relationship with party building," Gleason explained.

And the truth is Trump prefers the rallies to the traditional fundraising dinner scene. Actually, let's be honest: Trump loves the rallies, and the rubber chicken circuit doesn't suit him: To do those right you go out and spend your speech bragging about the local heroes, not yourself. That's not exactly his strongest suit.

And despite Pence's creation of his own fundraising PAC -- an unprecedented move by a vice president in modern American politics -- this is not a coup. Instead, it is a smart strategic move by a White House aware that Trump's strength is not in being a party leader but a man willing to go to places where no Republican showed up before and ask people in his own unique way for their votes. Conversely, Pence shines in the party leader and party builder roles traditionally held by the commander in chief.

The fact that it's his PAC, instead of the president's, that gives out the first checks is new territory. The other new thing is that the administration is picking political friends very early. Pence's PAC often contributes to candidates who will face primaries -- such as Rep. Diane Black, R-Tenn., seeking her state's Republican gubernatorial nomination in a crowded field. Pence also gave to several Freedom Caucus House members ahead of their primaries across the country and cut a check to Rep. Marsha Blackburn, who has a primary for her bid for the U.S. Senate against a former congressman, Stephen Fincher.

There is a pretty good argument to make that we have three parties in this country: Democrats, Republicans and Trumpians. Currently, the latter two are in a coalition government, and Pence represents the head of the Republican Party.

In truth, in this rapidly de-institutionalizing world, this whole notion of political parties may be silly. We might be in a world where political movements and candidates just rent parties for ballot access.

For a lot of voters, one of the upsides to candidate Trump was that he came from completely outside of the world of Washington and Congress. But that same factor is a downside to President Trump, because it makes him less useful in negotiations.

Pence, then, brings the asset of being well-trusted among Capitol Hill Republicans.

It's a very odd dynamic in a series of years of oddities -- but should anyone really be surprised? In a time when the traditional dynamics of culture, media and politics have been turned on their head, that someone is holding on to the norms of political parties is the least controversial thing happening.