Respect for Community and the Flag Can Bring the Country Together

Salena Zito
|
Posted: Jun 13, 2017 12:01 AM
Share   Tweet
The opinions expressed by columnists are their own and do not necessarily represent the views of Townhall.com. 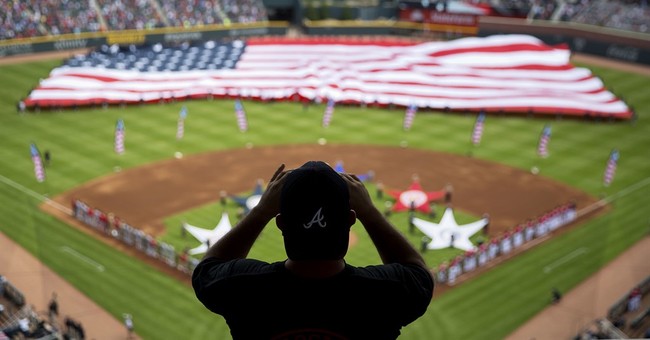 RICHLAND CENTER, Wis. -- Turn south along U.S. 14 to enter this Richland County seat and the first thing that catches your eye is the sun dancing off silver mixed with royal blue jutting out just so from the distant prairie on your left. Gradually, a sea of red and white stripes emerges in your vision. Soon, the only sound you hear is that of the wind furiously snapping hundreds of flags against their towering flagpoles. The chorus drowns out the brisk traffic whipping past you.

It is eerie. It is sobering. And it is beautiful.

It is the work of volunteers at The American Legion. Three hundred and sixteen flags stand in steadfast honor of all U.S. military veterans from this modest town, living and deceased.

At the base of each flagpole is a flat stone marker inscribed with a veteran's name, date of service and medals won.

The breathtaking park is funded solely by individual donations and the proceeds of fundraising events held at the Legion hall.

Outside the hall, a sign beckons members and nonmembers to come in for lunch. Inside, Pat Kraska sits at the bar, sipping on a tall ice-cold Pepsi and waiting for his meal. He is a second-generation American -- his parents emigrated from Bohemia -- and a second-generation veteran -- his father served in World War II, and he served in the Marines during the Vietnam War.

"There is a flag out there honoring both my father and myself," he says. "It's pretty humbling, and it's an honor. It reminds you that when you serve your country, you are part of something bigger than yourself.

"That is a feeling that is hard to describe. Yes, it is both inspiring and gratifying, but I wish I had a better phrase or word for the sentiment."

Twenty-nine-year-old Nate Peer tops off Kraska's Pepsi and goes back to the kitchen to check on his meal. Peer did not serve in the military, but he loves working behind the bar and listening to the Legion members' stories.

On the other side of the room, Odey Zierfuss, Dave Neefe, Junior Miller and Bill Kraska are engaged in euchre, the classic card game of the Midwest. Their combined military service spans the Korean War and Vietnam, and they are proud of the community spirit that built and maintains their flag park.

"The thing you learn in the service, or volunteering in your community, is that you are a better individual when you have a purpose that is larger than just your own self-interest," Zierfuss says.

Inside the bar, the sound of the wind clanging the metal flag grommets against the poles is muted but always present. A gust increases the sound and, in unison, everyone pauses, listens and then goes about their business.

On Wednesday, Americans will mark the 240th celebration of Flag Day, which commemorates the adoption of the flag of the United States in 1777 by resolution of the second Continental Congress.

While it is not a federal holiday, plenty of cities and towns across the country plan Main Street parades, fireworks displays, barbecues and the dignified burning of tattered flags unsuitable for use.

Plenty will not observe it at all; some may not even know the commemoration exists. Some may not care -- too many, by Pat Kraska's estimation.

"We are really losing our ability to come together in this country, even something as meaningful as our flag has torn us apart," he said in reference to the series of NFL players who, last year, decided to take a knee rather than salute the flag during the national anthem.

The day after the presidential election, Hampshire College students called for the removal of the American flag on their campus, declaring it a symbol of racism and hatred. Vandals then lowered the flag and burned it on Veterans Day.

In fact, many colleges had similar displays of disrespect for the flag, lashing out at it as a symbol of the results of the election.

The sad truth is the last thing that brought us together in a meaningful way was the terrorist attack on Sept. 11, 2001. It's awful that is the only thing about which we feel compelled to come together.

If you turn on the news or go onto social media these days, it is not impossible to imagine that we would struggle terribly to come together again if another tragedy were to hit this country.

In many segments of our society, we are so culturally segregated by differences in each other's core values that it has become the norm to not associate with the other. Many Americans inexplicably feel rage or fear over the mere mention of something that is different than what they believe; we have become intolerant, isolationistic and ignorant.

It is a societal trend that hinders our ability as a country not only to come together but also to feel as though we are all in this together, that we are part of something flawed by human frailties yet still made great by the promise of liberty and freedom.

There are no easy answers for this decline in our society.

Yet a brief visit to a town like Richland Center reminds you that all is not lost and, maybe, our path back doesn't have to come through tragedy but rather from one person, one community, at a time.