Legendary Dem House Seat May Go Down on Sloppiness 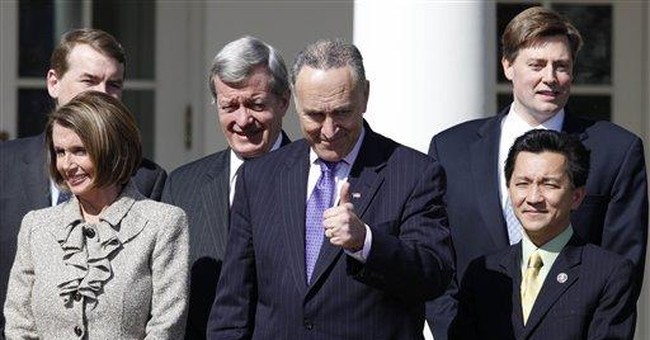 Everyone expected Jason Altmire to face a messy primary battle this spring with fellow Democrat Mark Critz, after their Western Pennsylvania congressional districts were essentially combined under redistricting.

No one expected Altmire to be unseated by something as rudimentary as failing to get 1,000 valid signatures on his nominating petitions.

Yet that is exactly what happened late last week, when the Critz campaign challenged 950 of the 1,600 signatures on petitions submitted by Altmire.

“Everyone knows the rules and what is expected,” Mikus said. “The fact that the Altmire campaign (collected) only 1,651 signatures, most of which are invalid, shows that his campaign has some very serious organizational issues.”

He might know a little about the Altmire operation: He worked on its re-election campaign in 2008.

The 12th District once was a center of national attention because of Jack Murtha, the longtime colorful and very powerful congressman who legislated from Johnstown for more than 35 years.  Even he had to battle a fellow Democrat, Frank Mascara, when their two districts were combined following the 2000 census.

Murtha beat Mascara handily but the battle became so bitter that Mark Singel, a former acting governor, is pretty sure both men went to their graves never speaking again.

“Fair to say that animosity lingered to the end,” Singel said.

“This is a pretty unusual situation,” said Geoffrey Skelley, a University of Virginia Center for Politics analyst. The closest comparison he can recall occurred when former congressman Charlie Wilson of Ohio failed to make the ballot for lack of signatures and “had to run a write-in campaign to win the Democratic nomination.”

Washington Democrats parachuted in and produced way more signatures than Wilson needed. He went on to win the general election.

“This episode shows that Altmire’s team … did a poor job of executing a straightforward task, which reflects poorly on the congressman,” said Skelley.

The only explanation that comes to mind is that redistricting left the political boundaries up in the air until December.

Still, Critz’s team collected more signatures than Altmire’s – and most of the new district is from Altmire’s old turf.

“Even more damning,” according to Skelley, “is the fact that 385 of the 942 signatures being contested by Critz were collected by an Altmire staffer who lives outside the district, which isn’t allowed under Pennsylvania law.”

The signature-collecting requirements are pretty clear, he said, yet Altmire’s staff may have made enough mistakes to cost him a place on the Democrats’ primary ballot.

Pitting incumbents against each other is a classic strategy used by the majority party to wound the opposition. We see incumbent-vs.-incumbent battles every ten years, in the first election following redistricting.

A similar example can be found in Ohio, where longtime congressmen Dennis Kucinich and Marcy Kaptur, both Democrats, were pushed together by the Republican-controlled legislature.

Washington Democrats say they are worried about the very real possibility that Altmire may be permanently damaged by being thrown off the ballot, or residually damaged going into a general election with a negative narrative about his capabilities.

Washington Republicans, by the way, are thrilled: They consider Altmire tougher to beat than Critz.

Altmire and Critz are classic centrist-conservative Western Pennsylvania Democrats. Obama won just 45 percent of the vote in Altmire’s old district and less than 50 percent in Critz’s, so both candidates are capable of winning in fairly purple territory.

The new district is about a 45 percent Obama district. So Altmire indeed might have a better chance of winning the general election than Critz, having held a Republican-redder district in the past and having represented more of the new 12th District, according to Skelley.

Even without this party spat, or even in a non-presidential year, this Western Pennsylvania House seat would be front and center in national press coverage: It leans right, could easily be held by a conservative Democrat, and is home to voters whom Obama once referred to as bitter and clinging to their God, Bibles and guns.