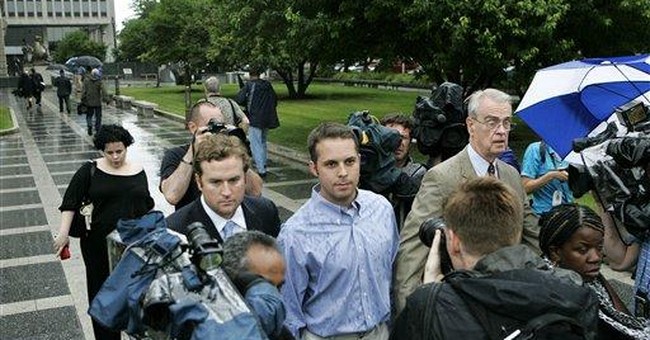 Deep-Democrat-blue New Jersey is on a direct course to go Republican-red this fall, and it does not look like even Obama-esque hope and change can stop that.

To the middle-right (the only way New Jersey can reasonably go red) is former U.S. Attorney Chris Christie. To his left is Gov. Jon Corzine, running in one of two (Virginia is the other) off-year gubernatorial elections.

RealClearPolitics’ average of recent polling shows a 51-39 lead for Christie. For an incumbent, being not only behind, but far under 50 percent, is deadly. Just ask Pennsylvania’s former U.S. Sen. Rick Santorum, a Republican whose numbers in a 2006 race against now-U.S. Sen. Bob Casey Jr. mirror Corzine's today.

One highly respected national pollster for the Democrats says he doesn't like the tea leaves he sees in this race, admitting privately that "this may be over" for Corzine.

"Corzine has been around the block,” with two U.S. Senate terms and one as governor, so “his Republican challenger may be able to look like a plausible alternative" to tired voters, says political scientist Bert Rockman.

Corzine was not helped when 44 mayors, state lawmakers and miscellaneous public officials – many of them Democrats – were arrested as part of a bizarre live-organ, Gucci-handbag racketeering ring.

Last week, Corzine, feeling boxed-in by his own personality flaws and lack of traction, played the "Bush card" – with an ad tying his opponent to the former president.

In last year’s hope-and-change cycle, that would have been a big hit. This year, not so much.

The narrative in this race is all about Corzine and the Democrats’ brand, not whether or not Christie liked George Bush, or even Christie's record.

Overall, this is a bad time to be an incumbent governor. Corzine's mistakes over several years – such as paying off his ex-girlfriend (the New York Times reported the number as $6 million) – and his more-than-the-legal-limit of personal hubris, only add to his problems.

In fairness, Corzine did inherit structural budget problems created by his predecessor, a difficult task to deal with in a good economy but horrendous to face during a major economic downturn.

Undecided voters tend to swing toward a challenger. The one thing that will keep people guessing in this state is that, in several past elections, undecided voters have swung to the Democrats.

So what looked like very close elections for Sen. Robert Menendez, Corzine and former Gov. Jim McGreevy basically turned, in their closing days, into blowouts of their Republican rivals.

While New Jersey is reliably Democrat in national politics, it remains a place where Republicans can do well at the statehouse level.

It also is extremely tax-sensitive; taxes there are high, so voters instantly rebel at any attempt to raise them – issues that play against Corzine and his party brand.

But let's be honest: New Jersey is true-blue, and the last time it went Republican was in 1993, when Christine Todd Whitman came out of nowhere to win the governorship.

That year's election helped to set up the 1994 Republican landslide in Congress – so you have to wonder if a Chris Christie win will send the same signal to Washington.

When Corzine won his Senate seat in 2000 and the governor's office in 2005, he basically self-funded his races with a personal fortune earned as chairman of Goldman Sachs.

This time, thanks to personal losses from Wall Street’s collapse and a nasty divorce settlement, he’s had to devote more time and energy to raising cash, while trying to find a message that eclipses the state’s political corruption and economic downturn.

Corzine's only hope is to increase Democrat turnout in base areas such as Democrat-rich, heavy-voting Hudson County, which carries the same weight as Philly in Pennsylvania, or Cook County in Illinois.

Can he? Not likely, given that the turnout model is skewing to Republicans being motivated and independents being fatigued with his party.

Democrats may justify a loss in Virginia’s gubernatorial race because fewer blacks will vote this time than in 2008 (although they won't admit that).

Corzine losing is different, however – and more of a hit to President Obama and his party brand.