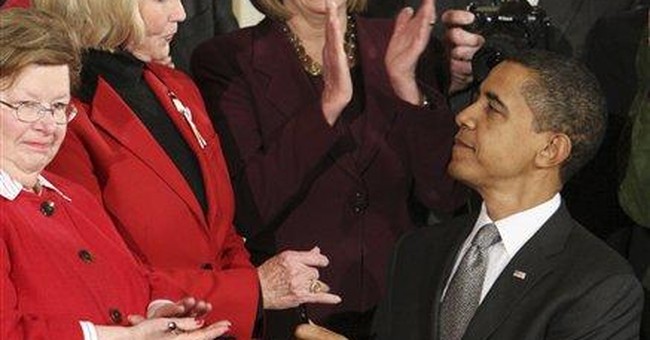 There is not much glory to being the political party out of power, but that does not mean it is without opportunities.

In fact, there is a little more room to act riskily when you aren't running the joint.

The challenge for Washington's remaining Republicans is to think of constructive, not obstructive, ways to help fashion a better plan on every issue facing the country.

One way, University of St. Louis professor Joel Goldstein says, is for GOP congressmen to think of ways to use the stimulus package to strengthen the role of state governments. "Or they might envision ways to make certain that the proposed spending package is not permanent," he adds.

Another approach he suggests is to address some of Wall Street's flagrant abuses that contributed to our economic crisis.

A bold approach by a minority party certainly worked in 1990, when a group of freshman House Republicans - the self-described "Gang of Seven" - began taking on House banking issues and ethics reform.

GOP boldness did not defeat President Obama's stimulus package, passed last week without a single House Republican vote. But it did send a message from the minority party: "We are not going to lie down."

Some observers say the original "Gang of Seven" contributed to 1994's GOP House takeover, and the gang deserves credit for raising topics, such as corruption and waste, that took hold in 1992 and 1994.

"They weren't the critical factor in the rise of the GOP, though," says University of Virginia political scientist Larry Sabato. "Bill Clinton was."

Taking on the ethics issues of the very powerful House Ways and Means chairman Charlie Rangel, D-N.Y., might be a good start. Rangel admitted last fall that he failed to pay thousands of dollars in real-estate taxes for rental income he earned on property he owns in the Dominican Republic.

Today's political context is different, however. The 1990 "Gang of Seven" were newly elected congressmen; they capitalized on their ability to associate congressional abuses with Democrats who had controlled the House for nearly 40 years.

"The Democrats have only just returned to power in the House in 2007 after 12 years of Republican control," Goldstein says, adding that the GOP years didn't exactly leave a good taste in Americans' mouths.

As House Republicans look to be relevant in the Obama era, a new group of leaders must emerge to challenge the way things are done under one-party rule. They must force the changes that House Speaker Nancy Pelosi promised to deliver; they must focus on process, on mastering House operating rules.

They should pick fights with Speaker Pelosi, not President Obama.

An emerging leader for the gang is Rep. Eric Cantor, R-Va., probably the most trusted member of the GOP leadership and the one who looks out for GOP House members.

Some conservative "young guns" in the House who could work with Cantor on a "Gang of Seven, 2.0":

* Kevin McCarthy (R-Calif.). Former congressional staffer for his predecessor, Rep. Bill Thomas, and former minority leader in California's state legislature. Aggressive, equipped with a non-stop motor, he's established himself as a leader in the House.

* Paul Ryan (R-Wis.). Smartest guy in the room on policy; cares about conservatism both as an intellectual and a political movement.

* Mike Pence (R-Ind.). Gifted communicator with a Reaganesque quality and a strong following in the evangelical and conservative communities. He seems ready to take on the status quo every day.

* Duncan Hunter - The Son (R-Calif.). A veteran who served two tours in Iraq and one in Afghanistan, he is poised to take up his father's mantle as an expert on national security issues.

* Tom Rooney (R-Fla.). Scion of the Pittsburgh Steelers family; a veteran who taught at West Point, and a young up-and-comer on national security.

These talented legislators blend newsness and experience, and they are the future of what the Republican Party should look like.

It's going to be a while before Republicans find themselves in the Capitol's majority suites again.

Yet if they begin with the small battles - not just exposing corruption but using House rules to make the minority voice heard; standing firm on not misspending the stimulus package and on cutting taxes to stimulate growth - they can recreate a healthy GOP brand.