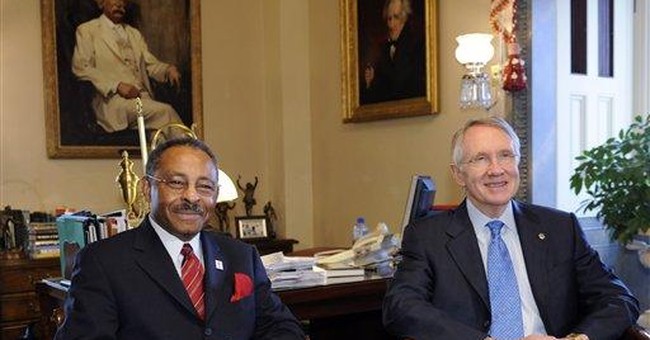 Herzik said Reid is not beloved in Nevada: “He is powerful and respected, but he also has very harsh critics in the state … even among Democrats.”

Until the last election cycle, Nevada has been a fairly even split between Democrats and Republicans. Thanks to aggressive voter registration during last year’s early party caucus, Democrats now outnumber Republicans by 100,000 registered voters.

“That surplus, and the fact that the Republican Party is in disarray, is about the only good news for Reid,” said one inside-the-Beltway Democrat strategist who is from Nevada and considers Reid a “disappointment.”

One thing hurting Reid is that his state is changing. Anytime you have an established, old-school politician in a dynamic state with thousands of people moving in who have no historic affiliation toward their U.S. senator, it’s a problem.

“To win, you need a connection among the new voters,” said Jon Ralston, a Las Vegas pundit, “which is difficult to achieve when the candidate is charismatically challenged.”

Also hurting Reid is Nevada’s economy. His traditional role of delivering the bacon helps, but Nevada hovers between No. 1 and 2 in the nation in foreclosures, Las Vegas is tanking economically and construction projects are being canceled for the first time in anybody’s memory.

“Nevada has been hurt by the economic downturn more than any other state in the country,” said Herzik, citing a recent Rockefeller Center Report showing Nevada way ahead of the national downturn.

Then there are those “Reidisms” – stunning proclamations that give staffers acid reflux, such as the time he surrendered the war in Iraq by saying it was lost. Or when he said “coal makes us sick” while Obama was trying to win the Appalachia vote. Or his very vocal refusal to seat Illinois Democrat and senator-designate Roland Burris, who was sworn in Thursday as a U.S. senator following a 180-degree turn by Reid.

“Oh, he did not look good in that,” said Herzik. “The coal issue really doesn’t hurt him here, but the ‘war is lost’ has had lingering effects even though the saliency of the issue has dropped.

“But Burris, and the failure to get the votes against warrant-less wiretaps, were not … his finest moments.”

The Burris dust-up particularly infuriated Democrats because people who know Illinois better than Reid, such as Sen. Dick Durbin, D-Ill., told him to give the green light to a special election. Reid, concerned about losing a Democrat seat in a special election, by default gave tarnished Illinois Gov. Rod Blagojevich the power to make the appointment.

“At the end of the day, Harry Reid is going to get re-elected,” said Phil Singer, the brains behind the Democrats' stunning Senate wins in 2006. Singer points to Democrats' significant outnumbering of Republicans in the state.

And you can’t beat someone with nothing – so, while Reid is a juicy target for Republicans, the GOP today has no one to carry the ball.

“If you look at the opportunities that Republicans have for the next cycle, if (Reid) is not at the top of the list, he sure is No. 2,” said Republican strategist Glen Bolger.

Bolger dismisses Republican weaknesses and points to recently defeated Rep. Jon Porter, R-Nev., as a credible candidate: “The only reason he lost is that it was a terrible year to be a Republican across the country and in that state.”

Fair enough: Plenty of candidates have bounced back from defeat to win higher offices. “Had Porter won, Reid would already be in a serious fight,” said Herzik.

Another guy on the bench is Nevada’s Lt. Gov. Brian Krolicki, who has already announced his candidacy for the Senate. Too bad that -- a week after his announcement -- he was indicted.

“This indictment stinks,” Herzik said. “It is a political indictment by a Democratic state attorney general that is a Reid loyalist.”

Ralston warns anyone who stands in Reid’s way that he “is totally ruthless and Machiavellian. ... He will do everything he can to keep anybody viable out of this race, because he knows he is in big trouble.”