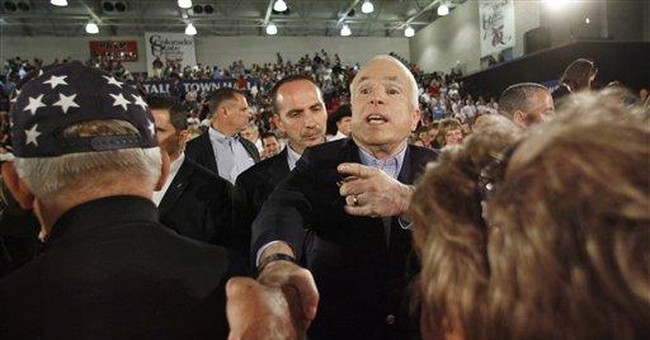 In case you haven’t noticed, Senator, you are losing the argument to be the next president of the United States. And you are doing it all on your own.

Recent trends and polls show that Americans are shedding their discomfort with Barack Obama, and women and independents are breaking in his direction.

For your part, you are doing nothing to persuade people to do otherwise.

Time to shed the over-handling and carefulness and go at it.

A movement is brewing in this country: Americans are looking for a leader. Bush is devoid of leadership. Nancy Pelosi demonstrated she is incapable of displaying it. And Harry Reid proves his ineptness daily.

America is in crisis. We have a war that has dragged on for six years. Our financial markets teeter on near collapse. Our national morale is low. And our international image is damaged.

We have a federal government paralyzed by partisan politics. Last week's defeat of a financial rescue (or bailout) plan in the U.S. House was a perfect example; all the House “leaders” could not pull off a successful vote.

You and Obama both have had problems demonstrating leadership during this crisis. You could not sway House Republicans to accept the rescue/bailout. Obama spoke to the Congressional Black Caucus the weekend before the crucial House vote -- and look how its members subsequently voted against the bill.

Where was the leadership?

We have four weeks left for one of you to reveal the character of his leadership. The one who does will win.

You had things under control after the back-to-back national party conventions. Not everything was exactly breaking your way, but you were steadily building goodwill and confidence among women, independents and detached Democrats. And the base was thrilled with your choice of Alaska Gov. Sarah Palin as your running mate.

Since then, you’ve made a series of managerial decisions that have frustrated those who support you or who are considering your candidacy.

Seemingly out of nowhere, you started coming across as frantic -- not reassuring, and a stark contrast to the way you dealt with the Russia-Georgia crisis.

In contrast, when the economic crisis hit Capitol Hill, Obama had the wisdom to remain quiet; he quickly shed his rolled-up-sleeves-on-the-campaign-trail persona and his casual-speak and instead suited up and came across as presidential.

Given your decision to suspend your campaign to go back to Washington, you should have met immediately with Treasury Secretary Hank Paulson and then headed to Capitol Hill.

You should have gotten into the arena effectively and, for all that is politically sacred, you should have never said you might not go to the first presidential debate in Mississippi. Instead, you should have declared: “I am going to do all of these things and then I cannot wait to debate my opponent, because I want Americans to see what my plan is.”

Starting now, stop allowing political sideshows to get in your way. No one cared if Gwen Ifill, the moderator for the vice-presidential debate, is writing a book about Obama. Really -- no one cares.

And what were you doing in Iowa? You need to be in Virginia, Ohio and Pennsylvania, with side trips to New Hampshire and Colorado -- and never anywhere else.

Tactically, you should be talking about your plans for America to escape its psychological mess and its very real economic and foreign policy morasses. And be upbeat. No more whining. Whining only gets in the way of your message about how you will move the country forward and demonstrate leadership.

In contrast to your mistakes, Obama is doing everything right; the recent polling trends toward him back that up. He is coming across as steady, calm, reasoned.

Perhaps you need to embrace your inner Harry Truman.

While many pundits are crying “Free Sarah Palin!” in response to the lack of press access to her, it might be wiser to free yourself -- and let you be you.