Rocky Roads To The Nominations 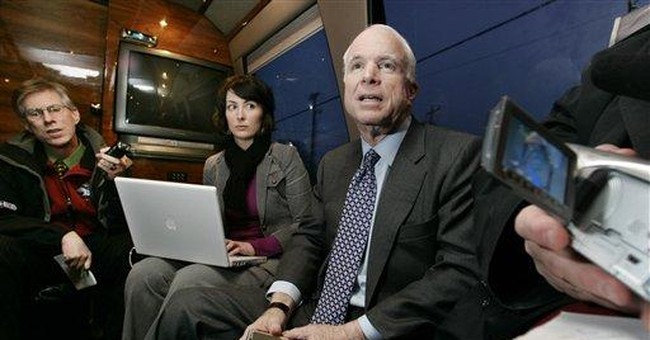 Super Tuesday -- the closest thing to a national primary this country has ever had -- may go down as one of our democracy’s greatest elections.

It finished off Mitt Romney, crowned John McCain and ensured that Hillary Clinton and Barack Obama would be fighting for delegates all the way to the convention floor.

Now the races in both parties are being driven not by issues but by the personalities of the candidates and the perceptions of the public and the media. As their campaigns head down the stretch, it's going to be one heck of a road trip. The prospects for each:

Barack Obama has the money (he raised $3 million on Super Tuesday alone), the momentum (he won more states that same day) and the movement of change (just go to an Obama speech -- you’ll understand). You’d think that would be enough to clinch the nomination.

Hillary Clinton is stumbling, yet she never falls. Her money is scarce (she had to lend her campaign $5 million). Her best campaign asset, Bill Clinton, has been noticeably absent lately since South Carolina (too many angry Bill videos on YouTube).

And the primary calendar created by then-Democratic National Committee Chairman Terry McAuliffe to benefit her has become her nemesis (the remaining primaries are either heavy on black voters or are state caucuses, both of which benefit Obama).

Tuesday’s “Potomac Primary” is made up of Maryland, Virginia and the District of Columbia. More than likely, Barack will win in D.C., thanks to the black and upscale suburban votes; expect good results for him in Maryland, too.

Virginia is an open primary, which benefits Obama, but a winning scenario there can be written for either candidate. The following week Democrats hold a primary in maverick Wisconsin, an open primary and a challenge for Clinton.

That leaves two critical dates for her:

On March 4 are the huge Texas and Ohio primaries, both of which Clinton should excel in -- Texas because of its large Hispanic vote, Ohio because of its lunch-pail Democrats, though large black populations in Ohio’s cities could prove problematic for her.

That sets the stage for Pennsylvania on April 22. It will be “Rocky Revisited,” a fight-to-the-death between two giants. Democrat strategist Mark Siegel says a win in Pennsylvania could produce a "huge gust of momentum" that "could create a credible psychological claim to the nomination, especially if the previous delegate count was inconclusive.”

The road trip for Republicans has been just as driven by personalities and perceptions.

In the beginning, Mitt Romney was labeled a flip-flopper, John McCain was written off and Mike Huckabee was just the Baptist minister from Bill Clinton’s hometown.

Romney’s defeat in California on Super Duper Tuesday made it nearly mathematically impossible for him to catch McCain. He dropped out on Thursday -- after staying in just long enough to severely cripple Huckabee's chances. Now the time has come for McCain to aggressively reach out to the conservative base of the party.

“If McCain uses this time well -- and he desperately needs to do so -- then he can make progress in reuniting the party, raising money and positioning himself for the fall campaign,” said Larry Sabato, political science professor at the University of Virginia. “But this will be a difficult race under tough conditions for any Republican.”

In January 2007 Clinton and McCain were the presumptive, "inevitable" candidates for their parties’ nominations. They both had healthy amounts of cash, a surplus of expert staffers and clear paths to their nominations. Along the way, Clinton has had to fight off Obama’s insurgent candidacy and McCain has had to fight his way back to the top after being declared politically dead.

Now, one year after they started the road trips they hoped would lead them to the White House, the future is much less clear for her than for McCain.