Apollo 1: The Fire That Changed History

Ryan Walters
|
Posted: Jan 27, 2022 12:01 AM
Share   Tweet
The opinions expressed by columnists are their own and do not necessarily represent the views of Townhall.com. 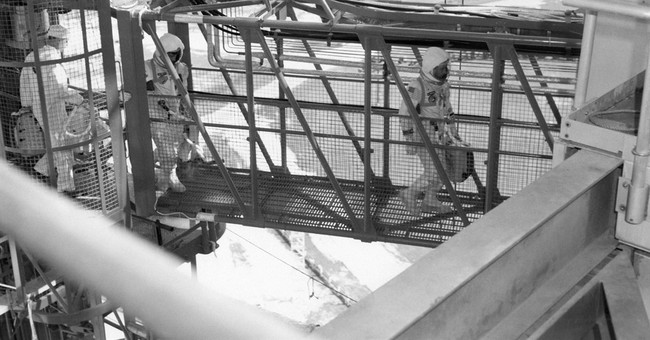 “We got a fire in the cockpit,” Senior pilot Ed White called out at a little past 6:31 pm on Jan. 27, 1967. “We got a bad fire,” yelled pilot Roger Chaffee soon after. “We’re burning up!” The three-man crew of Apollo 1, including Commander Gus Grissom, were killed in a terrifying inferno that took their lives within seconds.

Fifty-five years ago, the tragedy of Apollo 1 was a gut punch to the nation. Three helpless astronauts, tightly locked inside an Apollo capsule sitting atop a Saturn 1B rocket on Pad 34 down at the Cape in Florida, conducting a routine test of the spacecraft’s systems, perished just weeks before the first manned mission of the moon landing program was set to launch, crippling Project Apollo before it ever got off the ground.

In the late 1960s, America was on a mission to get to the moon by the end of the decade, to fulfill a promise made by the late president, John F. Kennedy. The Mercury and Gemini programs were successfully completed in November 1966 and Apollo was set to fly in February 1967.

All that remained to get the first flight into space was to do a final test of the Apollo capsule, the “plugs-out” test, a simulated launch sequence that would show the spacecraft to be flight worthy.

The three astronauts, set to fly the first mission, were inside the capsule, wearing their space suits and helmets, the complex hatch tightly sealed, 100 percent oxygen filling the cabin, and the spacecraft itself operating under its own power. But what they didn’t know was that this machine, the most complex ever built, had a dark secret.

After being in the spacecraft for five long, miserable hours, with the test dragging on and glitch after painful glitch slowing what little progress was being made, the astronauts were beginning to feel the strain. And then something sparked in the more than 30 miles of wiring within the command module, igniting the pure oxygen atmosphere. It quickly grew into a firestorm, burning at more than 1200 degrees Fahrenheit, hot enough to melt aluminum.

The fire quickly burned through the oxygen hoses, leaving the astronauts nothing to breathe but toxic smoke and fumes. They asphyxiated in less than 20 seconds. The public mourned their loss a few days later, as Gus Grissom, Ed White, and Roger Chaffee were laid to rest.

But would the program also be laid to rest? Many thought the goal of landing on the moon might be lost forever.

Even before the fire, public opinion polls were beginning to show that more and more Americans were not onboard with a trip to the moon. An increasing number in Congress were questioning the high level of spending, with roughly five percent of the federal budget going to NASA, coming in at more than $5 billion per year. This at a time when the country was engaged in a full-scale war in Vietnam while also funding Lyndon Johnson’s Great Society programs.

Public dissent would only grow. In July 1967, six months after the fire, a Harris poll showed, for the first time, a majority of Americans did not believe Apollo was worth the cost, both in terms of lives lost and money spent. NASA, though, would push forward.

The Apollo spacecraft contract had been awarded to North American Aviation in the fall of 1961 and the development of the world’s most sophisticated machine had been inundated with problems. In the words of one Apollo astronaut, “This bucket of bolts won’t make it to Earth orbit.”

NASA knew there were serious issues and were working to get them fixed before launch day. Unfortunately, the hard, around-the-clock work didn’t catch every hidden flaw and tragedy struck.

But the space agency did not duck responsibility. NASA created an official Review Board to investigate the tragedy, assigned blame, and worked to redesign the spacecraft over a period of 18 months, with more than 1300 changes to the original design, including a new hatch that would allow for easy escape, something the Apollo 1 crew did not have. What emerged was a magnificent flying machine that would ultimately make nine trips to the moon between 1968 and 1972.

Throughout NASA, widespread opinion prevailed, then and now, that had the fire not occurred, another accident was almost certain, which could have been worse, especially had it been in space, and that could have been enough to derail the program permanently.

The fire, though, did have a silver lining. It alone exposed the flaws in the spacecraft, defects that would have prevented it from fulfilling its mission. The modifications to the spacecraft and changes to the program ultimately made space travel safer.

Space flight is still a dangerous occupation and accidents still occur but because of Apollo 1, no longer would an American spacecraft use 100 percent oxygen under high pressure. No longer would flight crews be without adequate safety features should disaster strike.

Americans can be proud of their space program and the ultimate success of Apollo 11 in 1969. But it was because of the sacrifice of Gus Grissom, Ed White, and Roger Chaffee that made the moon landing possible. Their loss was not in vain.