Ryan Shucard
|
Posted: May 19, 2020 10:20 AM
Share   Tweet
The opinions expressed by columnists are their own and do not necessarily represent the views of Townhall.com. 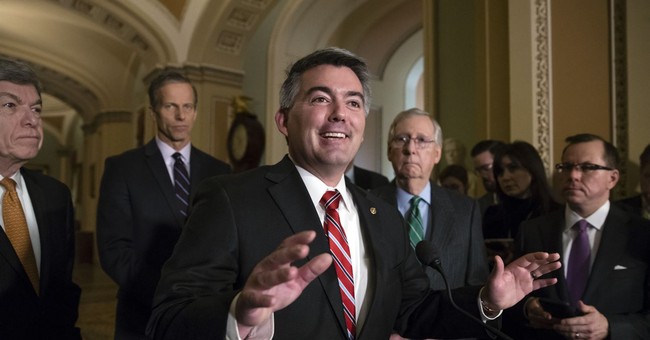 It’s no secret many of our representatives enjoy easy reelection prospects. Fewer and fewer must actually show their mettle, deliver on promises, and successfully manage constituent needs - especially amid a global pandemic. For many Republicans seeking reelection, the COVID-19 outbreak in their states is their pass-fail moment.

Every news cycle will be dominated by COVID-related headlines and every measure of success, rightfully applied or not, will tie into how well they managed their response and leveraged their position to serve their state’s needs. But Republicans’ opponents, like Joe Biden on the national stage, must stay at home, unable to campaign and most importantly, unable to prove their ability to deliver on the most basic needs of voters during a truly pivotal moment in human history.

In otherwise normal circumstances, pundits and pollsters would suggest Senator Cory Gardner (R-CO) has an insurmountable challenge to winning reelection in Colorado. They would write him off citing all kinds of self-serving national trends and prevailing “wisdoms” about his chances despite the fact his general election challenger has yet to be named. But what all those predictions fail to account for, especially in a time of crisis, are results.

This is an exceedingly rare moment in American politics where our leaders are truly tested. Our new normal, at least through this election cycle, means decades-old problems which have largely fallen victim to partisan gridlock and special interest spending will take a backseat to things like access to personal protective equipment (PPE) and small business resources, along with thorough testing capabilities and measured plans to reopen local economies.

At the ballot boxes, voters will be more inclined to favor action over rhetoric. They want action on holding China and the World Health Organization (WHO) accountable. They want evidence that as many test kits as possible are available and they want to know their elected representatives, especially those at the federal level, are working every angle to ensure shipments of PPE arrive in their state. And to both of those ends, voters want politicians to give the political jockeying and gotcha moments a rest and just work together so supply chains keep moving.

Voters instinctively know partisan debates over less pressing issues can resume once we’ve reinstated a sense of regularity to our economy. Therefore, they’ll instinctively favor the ones who get it done, crisis or not.

Senator Gardner is such an example. When others have been shy about holding China and the WHO accountable, he joined the effort with President Trump to call for an investigation. When experts said sourcing testing capabilities would be even more difficult given states were competing for resources just a few weeks into our country’s response, Gardner, as chair of the Foreign Relations Subcommittee on East Asia, worked with Ambassador Seoung-Hyun Moon from South Korea to secure 150,000 test kits. When Colorado needed N95 masks, he worked with the Taiwanese government to initiate increased manufacturing capacity and shipments only to announce a week later hardware giant Lowe’s would also deliver an additional 100,000 units for the state. And when local restaurant owners reached out for help, hours were spent on the phone helping them and over 40,000 other small businesses access $7.3 billion in assistance resources from the Paycheck Protection Program.

That’s the mettle, the right stuff, the kind of thing that gives voters what's most important: results and confidence.

Politics is a bloodsport, no matter the crisis. It’s the unfortunate nature of our current system, and as detrimental as its divisiveness has been to our unrealized successes, the people recognize when their needs are met as a result of politics being secondary thinking.

An unimportant few cares to remember if a Republican worked with a Democrat in response to this pandemic and frankly, our leaders’ actions will be decided on at the ballot boxes, as they always have. Historians and Monday morning quarterbacks will try to decide the impact of COVID-19 on electoral prospects but it’s the people, and faith in the wisdom of their judgment, who decide our nation’s future by sending people like Gardner back to the Senate.