Ryan Shucard
|
Posted: Jan 11, 2020 12:01 AM
Share   Tweet
The opinions expressed by columnists are their own and do not necessarily represent the views of Townhall.com. 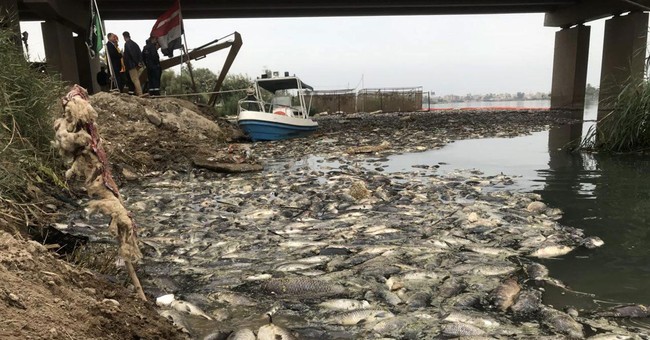 I get it, with all the impeachment and war with Iran hysteria, why would anyone care to cover the ongoing war against Asian Carp. It’s more likely that most people have never heard of the Asian Carp, nor seen a news story about just how much havoc these invasive fish have wreaked over the years. On those sentiments alone you’re probably wondering why anyone should care about the problem or about millions of taxpayer dollars sent to turn the tides against the Asian Carp?

It’s true, of all the things repeatedly and often moronically pile-driven into our heads by the unoriginal and flat-out negligent “news” media about the important issues of the day, and at a time when presidential candidates purport to be in favor of “kitchen table” issues, a story about a measly $25 million within an already shamefully wasteful and bloated federal budget seems rather uninspiring.

I might’ve thought the same until I did some digging into the Asian Carp issue now seriously referred to as the “War on Carp”. From Iowa to Tennessee, on down to Louisiana, and throughout the Mississippi River Basin, the Asian Carp has decimated local fish populations and severely damaged several river ecosystems. But before you dismiss this as some bleeding heart, eco-crazy, hyper-localized niche issue, let’s put on our economic thinking caps.

Communities throughout the Mississippi River Basin have suffered massive economic losses in commercial fishing, recreation, and tourism. Often these industries are the mainstays of their economies and when those suffer due to an invasive species that reproduces at an alarmingly successful rate, it has a negative ripple effect throughout the region.

Not only do Asian Carp rapidly reproduce, they dominate the consumption of food sources for other species of fish, thereby thinning their populations to critically low levels. This hurts the sport fishing industry which relies on a well-balanced and diverse set of species to attract anglers. But when local guides can’t hook local fish on the lines of their clients, the fishing sportsmen spend their dollars elsewhere. The commercial fishing industry, reliant on the indigenous fish populations to support the economies of their communities also suffers. Hauling in Asian Carp, which can grow to be anywhere from 40 to 100 pounds, isn’t exactly fetching top dollar in fish markets throughout the country and we all know it’s extremely tough to create a segment of the free market when the demand for a resource is relatively absent.

And did I mention these fish pose physical, not just economic, danger to people as well? Imagine a 40-pound, rather ugly-looking, fish jump as high as 10 feet out of the water while you’re motoring at cruising speed down the river. Now imagine that bad boy colliding with your face or worse yet, your spouse or children. Not cool.

Left unchecked and without this drop-in-the-bucket $25 million, coupled with other oppressive regulatory schemes and historically entrenched local economic challenges which constrict growth and it’s easy to see how something like winning the war against the Asian Carp really does matter.

And that’s really the underlying point of the whole debacle, these challenges serve as linchpins and hopefully successful examples of how properly applied political will can help local communities find local solutions.

Not surprisingly, these resilient local communities who’ve previously faced hardships not of their making, are finding solutions. Commercial fishermen have begun harvesting Asian Carp with events like “Carp Blitz” dubbed by the Tennessee Wildlife Resources Agency’s (TWRA) chief, Frank Fiss. They’ve sold thousands of pounds of carp to university cafeterias and other businesses where culinary wizards create appealing dishes for consumption. What’s more is that many of these dishes are beloved by Millennials who get a tingle about the idea of consuming something with a social cause or positive local impact associated with it. Will anyone explain to them this is a byproduct market forces? Probably not, so we’ve done it here.

But what of this $25 million provided by the federal government to deliver another decisive blow to win the War on Carp? While local authorities and market forces have created new ways to harvest and consume the carp, federal dollars go to extraction and eradication via technologies like bio-acoustic fish fences (BAFFs) which help keep the carp from spreading to new environments, or worse, the Great Lakes.

While little else is being done within the halls of Congress, Majority Leader McConnell, Senator Lamar Alexander (TN), and Representatives David Kustoff (TN-08) and Steve Cohen (TN-09), alongside several others from the Kentucky Department of Fish and Wildlife Resources (KDFWR), TWRA, and the U.S. Fish and Wildlife Service (USFWS) should get a shout-out for helping river communities score a much-needed victory in the War on Carp. Hook ‘em, net ‘em, eat ‘em, gone with ‘em!