Ryan Shucard
|
Posted: Jun 15, 2019 12:01 AM
Share   Tweet
The opinions expressed by columnists are their own and do not necessarily represent the views of Townhall.com. 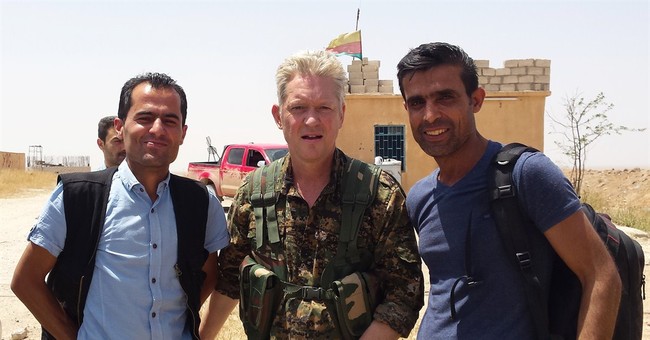 Dealing with a complicated and fragile situation somewhere in the Middle East has become an expected staple within the massive foreign policy portfolio of any modern American president. Often the exacting circumstances are far from the president’s control upon entering office and how they manage it usually defines that chapter of U.S.-Middle East relations, broadly speaking.

The Syrian civil war and the rise (and fall) of ISIS have dominated discussions about the region’s stability and the proxy implications for relations between the United States and meddling powers like Russia who see such forays into fragile conflict zones as necessary expenditures to undermine Western efforts toward stability and peace.

Layer that with a complicated political dynamic and an increasingly complex web of policies and rulemaking among allied countries like the U.K. and America – all amidst a delicate effort to maintain relations with Turkey, an essential logistical partner in prosecuting anti-ISIS operations in the region.

Tack on Kurdish forces, anti-Assad militias, and thousands of individuals who flocked to join the fight against the terrorist and pro-dictatorial strongholds, and the situation becomes even more complicated.

Which brings us to an unusual byproduct exemplary of just how tangled and labyrinthine the situation remains.

Michael Enright, a 55-year-old British-born man found himself at a peculiar crossroads which perfectly encapsulates the inevitable and often unpredictable tension between intense personal conviction and political institutions, for better or worse, which are governing international relations. He felt compelled to leave a Southern California lifestyle and Hollywood acting career to join anti-ISIS Kurdish groups fighting to eradicate the terrorist group.

Enright says ISIS’s brutality broadcast on the world stage with the beheading of journalists and countless other innocence inspired him join the Kurdish forces. It’s a life-altering decision no one can make lightly and few of us will ever fully fathom what it’s like to travel to a dangerous place to fight against an inhuman evil without the advantages of conventional military equipment and logistics, and the political and diplomatic support to execute a complicated campaign.

But Enright’s reasons are simple. In a recent Fox News article, Enright said, “I always felt I owed America a debt because it had always been so good to me. I love Americans and I love America. I didn’t go to help the Kurds, I went there to fight for America.”

Currently, Enright’s crossroads appear to feel more like equatorial doldrums. He’s stuck in an undisclosed Central American country after being flagged for reentry to the United States for overstaying his visa.

And so, the fragile complexities of one of the great geopolitical challenges of our time has made things incredibly complicated for a man whose singular focus was to “do his part” amid a severely chaotic situation in a historically unstable and conflict-prone region.

But Enright’s dilemma matters because it illustrates how slow bureaucracies are to react and adapt to the rapid fluidity of international conflicts, especially in the Middle East. Vast overlays of outdated international agreements, on-the-fly situational rulemaking, and delicate handling of political sensitivities confluence to what can only amount to a “fall through the cracks’ moment for people like Enright.

However, his case is somewhat unique in that he left America as a noncitizen working here on a visa and his native Britain has their own rules for citizens returning from volunteer combat in certain regions, rendering him unable to return to either the U.S. or the U.K.

Enright says he considers America his home and prefers to return to the country and people who inspired him. But with lots of paperwork and bureaucratic hoops ahead, he’s decided to enlist the help of former colleagues and friends to help advocate for his return. He’s even penned letters to his would-be congressional representatives asking for guidance and/or assistance in obtaining clearance to return to civilian life in his adopted home state of California.

Despite Enright’s uncertain path ahead, he’s optimistic about returning home and as the last vestiges of ISIS are mopped-up by allied forces, he’s not shy about giving credit to President Trump.

“It was a big difference for us on the ground soon after Trump’s inauguration. Better supplies and equipment began to move in, and airstrikes were much more frequent,” said Enright.

Perhaps the President and a handful of lawmakers tired by these stories and self-imposed conundrums can leverage Trump’s style of cutting through bureaucratic messes and help bring Enright home.