The Free Market Will Prevail 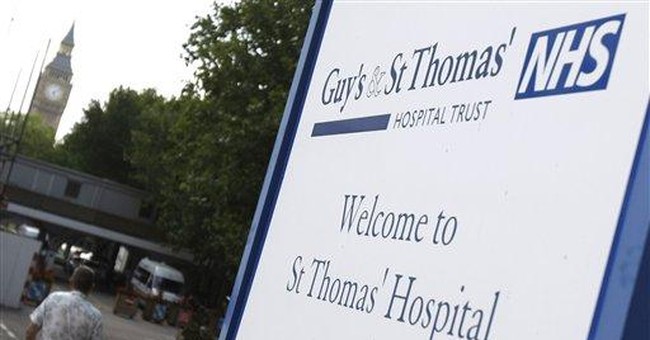 What will this mean for our fight over healthcare here in the U.S.? This is a good thing, right? With goals such as “putting the power in the hands of the patients and clinicians” and relying on “doctors’ control,” the free-market philosophy is clear. It will surely help the citizens in the UK.

Yet seemingly, as the UK embarks in this newly targeted, wiser direction, the U.S. is moving in the opposite manner.

As NHS focuses on greater personalized care, the U.S. is moving into a more detached and generic variety.

As NHS cedes national control over health plans and treatment, the U.S. is consolidating that power in federal oversight and prerogative.

As NHS localizes discretion with doctors and patients, the U.S. is centralizing the administrative process in DC.

Most importantly, as NHS recognizes the failure of their 62 year experiment and is reverting back towards a freer market, the U.S. is ignoring all contrary empirical evidence and socializing. Yes, this initially seeks greater efficiency within NHS; however, it follows patterns developing throughout Europe.

The UK, Germany, Spain, Greece, France and other EU nations are implementing severe austerity plans rolling back their entitlements and other socialized elements. This rejection of socialist markets for freer markets is reflected by the NHS restructuring. As efficiency increases in UK healthcare and quality of life improves as a result, it is rational to assume that the larger economy will follow suit. It is possible that the sun might again rise on the British Empire.

What of the U.S.? For centuries, the U.S. has gained power, influence and wealth through the free market that led to unheard of prosperity and spurred immigration. This was our experiment. This was our success and this was what attracted the oppressed, the ambitious and the innovative to our shores.

Philosopher after philosopher has preached the power of the free market: Hayek, Smith, Buckley and more. It allows for incentive, which in turn contributes to wealth and the public good. As the American Experiment of free market economy and republicanism took shape, subjects of authoritarian and collective systems joined our freer society, seeking success and escaping tyranny.

As the UK and other EU nations liberalize health and other markets, we become that which they now reject; what people have historically fled. Will this have the same effect on our achievers, professionals and citizens that we have previously had on other nations’?

There has been much discussion about the reliance on nurse practitioners and physician assistants as a result of the health care reform. The common argument: the current corps of doctors is insufficient to handle an influx of previously uninsured patients. But it is more reasonable to believe an exodus from our shores to the newly liberated ones is the rationale.

As we put the squeeze on our healthcare system, punish our physicians and obstruct our patients, prepare for this exodus: an emigration of doctors and industry. The U.S. medical community is the most accomplished in the world because of what they can achieve here. Remove that incentive, as another nation offers it, and they will leave like air from a balloon.

No matter which Kool-Aid is drunk, it is agreed that people seek incentives. After our healthcare professionals, will others follow? As our economy is increasingly socialized, while other nations liberalize, will there be a wealth transfer? As our health declines, our opportunity diminishes, our pursuit is made fruitless and placed on a more arduous road will our people stay as other nations offer opportunity? As government control of the economy exceeds 70 percent, will we morph from a land of immigrants into a land of emigrants?

It has happened before. It is how we were born as a nation. As we forfeit our position, we offer it for claim. There is no question, the free market will prevail. It just might not be ours.