Ryan Bomberger
|
Posted: Aug 17, 2017 10:38 AM
Share   Tweet
The opinions expressed by columnists are their own and do not necessarily represent the views of Townhall.com. 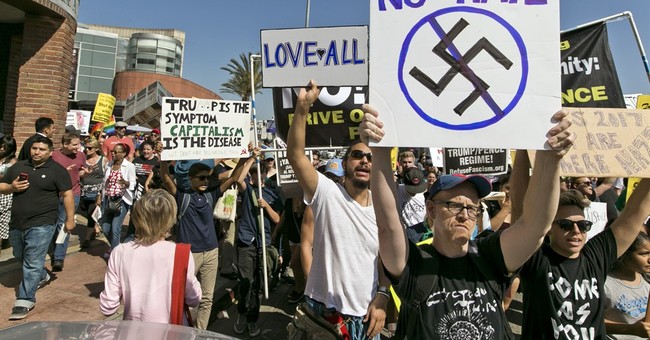 “Are you against the Confederacy?” I couldn’t help but laugh at the desperate question thrown at President Trump during Tuesday’s press conference. Really? A “journalist” is asking an American president…a New Yorker…152 years after the Confederacy…if he’s “against” the failed cause. Mainstream media, unable to pick any more meat off the carcass they made of Ferguson, is making a feast out of Charlottesville, gorging themselves on stupidity and crying “racist” between every bite.

MSM has been obsessing over daily demonizing Trump and the GOP that it’s become psychotic. I’m no fan of President Trump (forever grateful that it’s not President Hillary), but he can never seem to say the right thing, the right way, or the right amount of times. He has denounced white supremacists, repeatedly. (Former President Obama wouldn’t call out Islamic terrorism in eight years.) Trump further inflamed the Left’s sensibilities by denouncing the violence and racism on the far-Left as displayed by wannabe-communists, #BlackLivesMatter activists and Antifa.

Trump was asked by reporters, 3 days after the event, when he planned to go to visit Charlottesville. It took President Obama 16 days to visit San Bernadino after the Islamic terrorist couple, Tashfeen Malik and Syed Rizwan Farook, slaughtered 14 people and wounded 21 others. Which mainstream “journalists” and Democrat politicians demanded that he call out Islamic terrorism?

Funny. #FakeNews media will completely ignore hundreds of thousands of pro-lifers gathered in the nation’s capital, but will fixate on a handful of racist clowns craving relevance in a small college town in Virginia. The racist Neo-Nazi, KKK, alt-right tiki-torch tantrum could have gone down like a tree in an empty forest, but, instead, the Left made it into a spectator sport. Timber!!! That’s the sound of civility crashing to earth as anarchists, racial activists and social justice whiners clashed, enabled by police acting as bystanders.

And one precious soul was killed. Heather Heyer shouldn’t have been a casualty. But Charlottesville, because of political reasons, was allowed to erupt with hatred and violence.

As someone who is biracial, my heart grieves that the poison of racism is handled so recklessly. After witnessing over 8 years of Barack Obama’s squandered opportunities to engage constructively on racial issues, I’m now listening to the Left’s daily obsession with calling everyone who disagrees with them a racist. That’s the liberal way to end the conversation.

It’s bizarre considering the projection that seems to be going on from the Party of Slavery and Jim Crow. Discontent with just revising history, they now want to purge it. I’m a staunch defender of the First Amendment. Even (non-violent) ignorance has the right to be voiced. If former dunce-cap-wearing David Duke wants to talk about “taking this country back” for the extremely small minority of white folks who think like he does, he’s entitled to that lunacy. He might want to listen to that folksy tune “This Land Is Your Land” again. Black, white and every hue in between. Rich, poor and every socioeconomic status in between. Legal immigrant and native-born. Republican, Democrat, Independent, or anywhere along the political spectrum. America belongs to all of us.

The gun-toting, swastika-waving, “white-pride” brigade did raise a valid First Amendment issue in the midst of the mayhem. Are all Americans entitled to free speech? Sorry, Antifa, #BlackLivesMatter, Workers World Party and other leftist organizations and activists. There is no Freedom from Offense or Freedom from a Statue. Where do we possibly draw the line? Today, the Left can’t seem to purge enough from the public sphere—religious symbols (well, at least those Christian ones), sidewalk chalk, gender-specific pronouns, and Confederate anything.

Should statues of NAACP co-founder, W.E.B. Du Bois, be toppled? Du Bois was kicked out of the (now far-Left) civil rights organization because he supported segregation. He became a Communist, renounced his U.S. citizenship (became a citizen of Ghana in 1963), and praised mass murderers Joseph Stalin and Mao Zedong as great leaders.

I’m no fan of the Confederate battle flag or anything from that defeated nation, but if you want to tear down present vestiges of “white supremacy”, let’s start with Planned Parenthood. Yes, the nation’s leading abortion chain birthed in eugenic racism and elitism. They seem to inject themselves into every social issue these days, using $554.6 million annual taxpayer dollars to pander, no matter what. They’ve been tweeting about Charlottesville and bringing an “end to white supremacy”. Uhhh, that would be like Penthouse wanting to bring an end to pornography or Ashley Judd wanting to bring an end to nasty faux-feminist rants.

Planned Parenthood kills over 260 unarmed black lives every day in America, yet the Left praises them. How many black deaths are attributed to neo-Nazis, KKK, or the alt-right? I hate racism. But I hate the shedding of innocent blood even more, regardless of the hue of the aborted.

We need to have honest conversations about what dehumanizes. And for a nation that is split about our present national sin of aborting 1 million innocent human lives each year, it’s hard to have any moral standing to address anything else that diminishes our humanity. In an increasingly secular culture that is hostile to Truth, the Scriptural prescription for peace gets lost: “Love the Lord God with all of your heart, with all your soul, with all your mind, and with all your strength. The second is this: ‘Love your neighbor as yourself’. There is no commandment greater than these.” Jesus spoke these words. When we fail to apply them, we get the bigotry and violence that used Charlottesville as its stage.

Healing and racial reconciliation will never come through toppling statues or shouting mantras at each other. You can take down all the Robert E. Lee statues across the nation, and it won’t change what lies in the heart. You can’t hate hate away. Racism will never end racism. Until we stop seeing ourselves as hyphenated Americans whose identities are fixed in the superficial, we’ll never experience the unity that can only happen through the supernatural.