Ryan Bomberger
|
Posted: Jan 13, 2016 12:45 PM
Share   Tweet
The opinions expressed by columnists are their own and do not necessarily represent the views of Townhall.com. 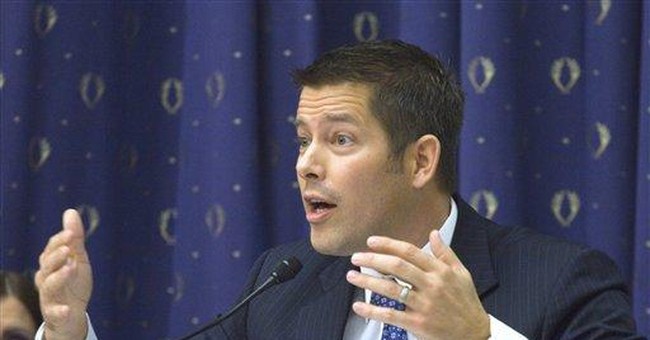 Racism. It’s the go-to for liberals. Every institution of American life is touched by it according to the racialists. Well, almost every one. Somehow, the industry that kills, disproportionately, black human beings for a profit isn’t racist. It’s “reproductive justice”!

Enter Congressman Sean Duffy, a Republican from Wisconsin. On the House floor he gave a powerfully disturbing speech about the alarming levels of abortion in the black community and wondering why the Congressional Black Caucus (CBC) has been silent.

But they haven’t been silent. They’ve been complicit.

The CBC, like every other black-led liberal “civil rights” group, is pro-abortion. The NAACP recently just lost a major free speech lawsuit, trying to sue The Radiance Foundation because we called them the “National Association for the Abortion of Colored People”. These groups actively partner with the nation’s largest abortion and aborted baby parts trafficking chain, Planned Parenthood. Last fall, the CBC sponsored a forum featuring the abortion giant. Keep in mind, abortion occurs up to 5 times more in the black community. In NYC, as Rep. Duffy alluded to, more black babies are aborted than born alive. For every 1,000 born alive, there are 1,180 are aborted. Where are all the cries that #BlackLivesMatter? Where are all the protests? Where are all the die-ins?

There are none. Because liberals don’t believe that all black lives matter. And the Congressional Black Caucus leads this hypocrisy.

The CBC says it’s the “conscience of the Congress”. This is a joke, right? This is the same body that accepted huge donations (over $250,000) annually from the tobacco industry even though the black community suffers higher rates of cancer. Despite health advocates decrying alcohol and tobacco companies disproportionately targeting urban areas with ads, the CBC had no problem taking this money. They even handed out free cigarettes at meetings.

The former chair of the CBC, Rep. Emanuel Cleaver, was given an award by Planned Parenthood for his “tireless work on behalf of millions of women…who faced the most aggressive attacks on women’s health and rights in a generation.” The aggressive attacks are on the most defenseless among us…especially the unarmed black lives in the womb. Cleaver used to be prolife before he ran for national office, as we’ve highlighted in our TooManyAborted.com abortion awareness campaigns. He was an advisor to Missouri Citizens for Life. Cleaver is yet another liberal black leader trading principle for personal political power.

Her vision? You mean her vision to use birth control to eliminate defectives? This is how Sanger described birth control in Chapter 18 of her book Women And The New Race: “Birth control itself, often denounced as a violation of natural law, is nothing more or less than the facilitation of the process of weeding out the unfit, of preventing the birth of defectives or of those who will become defective.”

Those words just resound with equality, don’t they?

According to leftist Politico (which didn’t bother to post the video of the speech), Rep. Butterfield found Rep. Duffy’s honest words “disgusting”. What’s disgusting is the racist propaganda that so many liberal black organizations like the CBC peddle. Everyone is racist. Everything is racist. Well, except the one industry that kills for a living.

In the end, the CBC, NAACP, National Action Network, Rainbow PU$H Coalition, and the National Urban League don’t believe that we’re all created equal. Their undying support for Planned Parenthood, the leading killer of our future generation, is beyond reprehensible. The CBC wants the House to vote on a resolution to condemn Congressman Duffy’s words. The condemnation should be for those who enable the violent social injustice of abortion while pretending that somehow, they--not the slaughtered millions--are the victims.