Ross Marchand
|
Posted: Aug 17, 2020 3:00 PM
Share   Tweet
The opinions expressed by columnists are their own and do not necessarily represent the views of Townhall.com. 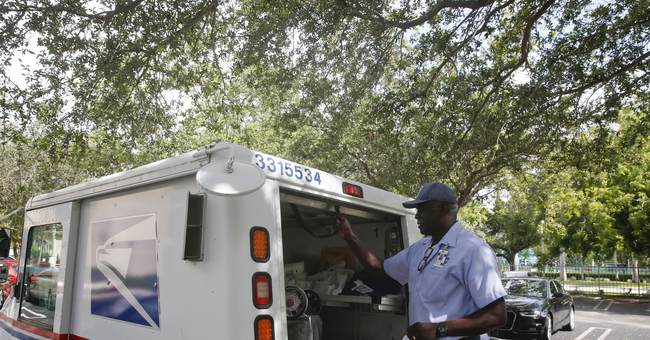 There is no shortage of misinformation about the U.S. Postal Service (USPS), a beleaguered agency that lost $8.8 billion last year and has more than $160 billion in unfunded liabilities. Since Postmaster General Louis DeJoy assumed leadership of the agency on June 15, former presidents, lawmakers, and even famed musicians have alleged that there’s a conspiracy to hobble the USPS. Fortunately, there’s no evidence that’s the case. While USPS leadership could’ve certainly done a better job of communicating postal policy changes, the changes over the past two months are continuations – and sometimes accelerations – of longstanding changes at the USPS. And, until more comprehensive reforms are undertaken, the agency will continue to bleed red ink and function inefficiently ahead of the 2020 election.

Since DeJoy assumed his role as PMG, reports of delayed mail have dominated media headlines. Part of the nationwide disruption of mail stems from DeJoy’s decision to crack down on runaway overtime costs, which have cost the agency a pretty penny. Mail often comes in late from processing facilities, and as a result, mail carriers often start their routes late and earn overtime in the process. These late trips cost taxpayers at least $200 million annually and contribute to increased work hours even as overall mail volumes decline. DeJoy has forced mail trucks to wait until the next day to make deliveries of mail pieces arriving late in the day, leading to complaints of a nationwide slowdown.

But the truth is the mail was slowing down in the years before DeJoy took over. According to annual on-time percentage data for market-dominant mail products (compiled by the National Association of Presort Mailers), deliveries on almost all market-dominant categories slowed pre-2020 with a particularly pronounced decline in single-piece 3-5-day mail. Clearly, something isn’t working when combined overtime processing and delivery costs exceed $1 billion annually yet delivery times are declining.

What are the results of DeJoy’s new overtime restrictions so far? There have definitely been some slowdowns, but the result is far from the “dismantling” of the USPS. According to comprehensive scanning data, “it takes about a day longer for First-Class Letters to reach 99% delivered in August than it did in June. But it still reaches 99% [delivered].”

Meanwhile, marketing mail (which is typically how election ballots are mailed out) is actually being delivered, “a touch faster than it did in February, presumably due to light mail volume.” Mail delays were stressful and inconvenient pre-DeJoy, and they certainly are now. But the scanning data simply doesn’t support the idea that mail isn’t being delivered. And most importantly, election mail seems to be going out a bit faster than usual.

But, of all the alarming reports coming out about the USPS, perhaps the most bizarre – and scary-sounding – anecdotes have had to do with postal equipment removals. Viral images appear to show countless mail collection boxes being hauled away with little/no explanation given. On August 13, CNN reported, “671 machines used to organize letters or other pieces of mail are slated for ‘reduction’ in dozens of cities this year. The agency started removing machines in June, according to postal workers.” These removals have since stopped, but that has done little to curb hysteria. Surely, all of these equipment removals are evidence that DeJoy is trying to seriously undermine the USPS.

Except…“reductions” and removals are nothing new. In 2016, the Inspector General (IG) found, “Nationally the number of collection boxes declined by more than 12,000 in the past 5 years…Our analysis indicated an additional 1,808 collection boxes could have been removed and another 637 relocated.” In 2017 the IG continued to report that, “the U.S. Postal Service has been removing underused boxes, with about 14,000 boxes removed over the past five years.” While there’s less documentation of sorting machine removals, federal watchdogs have repeatedly urged the USPS to cut down on excess mail processing equipment. In 2012, the Government Accountability Office (GAO) identified 3,000 unnecessary pieces of machine processing equipment and urged the USPS to adjust its network to reflect declining mail volumes. Eight years later, DeJoy is following the GAO’s advice. Again, hardly a recipe for dismantling America’s mail carrier.

It is reasonable to wonder why all of these equipment removals/service adjustments are necessary now, considering that a presidential election is just three months away. Election mail is fairly labor-intensive to process, since ballots are collected by carriers, driven to processing facilities, and often hand-sorted before being passed off to be tallied. Thus, the USPS needs to have enough of its workforce freed up to ensure that ballots matriculate through the mail system. But unnecessary collection boxes and sorting machines waste valuable work hours that could be used to facilitate the election mail process.

In 2016, the IG estimated, “removing unnecessary collection boxes throughout the Eastern Area would eliminate 73,043 workhours over the next 5 years.” Those are work hours that could be put to more productive uses, such as getting election mail from voters to the ballot box.

The USPS has a long way to go before it can fully correct course. DeJoy’s reforms are far from perfect, and he’ll need to explain operating changes to Congress and the IG. In the meantime, postal misinformation only serves to increase fear and distract from the real postal reform discussion that America needs to be having.