Ross Marchand
|
Posted: Jun 27, 2019 12:01 AM
Share   Tweet
The opinions expressed by columnists are their own and do not necessarily represent the views of Townhall.com. 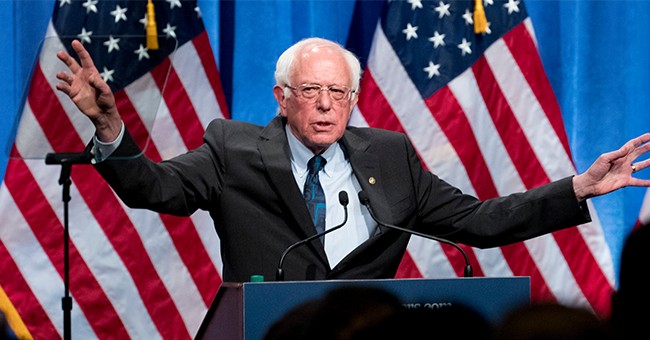 “Spoiled teenagers only like Bernie because of his promising free [fill in the blank].” You’ve probably heard it from your dad, uncle, grandfather — or all three. Indeed, promising free stuff is Sen. Bernie Sanders’ forte. On June 24, he gave the youth yet another reason to support his candidacy by announcing a plan to erase America’s $1.6 trillion in student debt and make most colleges across the country free. Except that…the youth just aren’t going to college like they used to, despite higher incomes and lower tuition (net of student aid) than a decade ago. Instead of wasting away in lecture halls during their formative years, millions of college-aged Americans are increasingly opting to forge their own paths forward. For that, Bernie wants to punish them.

It’s easy for 17-year-olds to be afraid of forgoing college. Mental images of depressed non-attendees consigned to waiting tables for the rest of their days plague the average high schooler. But not everyone is buying into that narrative anymore — college enrollment is dropping, even as high school graduation rates increase. From 2012 through 2017, high school graduation rates increased from 81.4 percent to 84.6 percent. These historically-large graduating classes face higher-than-ever college tuition and fees, but thanks to the rise in federal and state student aid, tuition and fees are on net slightly lower than they were a decade ago. And as net tuition ebbs and flows, real household income continues to rise.

Despite these trends, about 1.4 million fewer students enrolled in a higher education institution in Fall 2018 than Fall 2013. This drop isn’t much of a mystery; a rising economy encourages people to leave costly classrooms for companies that are increasingly desperate to hire new talent. In the throes of the Great Recession, students holed up in higher-education programs and waited out crashing labor markets. But if America stays its current economic course, over the next generation or two, we may be in for fewer recessions. American Institute for Economic Research scholar Dr. Polina Vlasenko notes that, “There have been 11 recessions in the 66 years since 1948 and only four recessions in the last 33 years.” Until a couple of years ago, economists such as Dr. Vlasenko worried that, even if recessions were shorter than ever before, they would be more likely to be followed by jobless recoveries. The sub- four percent unemployment, however, means we’re probably doing alright.

It’s not as though our need for college is necessarily going to balloon anytime soon, either. As the economy continues to roar and opportunities increase by leaps and bounds, young Americans are seeing alternatives to higher education grow, too. Motivated teenagers can hone their entrepreneurship and start a business. Take, for example, Abby Kircher (founder of butter company Abby’s Better Nut Butter) and Brennan Agranoff (founder of sports apparel company HoopSwagg) who have both seen their companies surpass $1 million in revenue, after choosing real-world experience over a college degree. According to data from the Bureau of Labor Statistics, there are hundreds of thousands of self-employed Americans between the ages of 16 and 19.

There are other excellent routes around higher education, too. Apprenticeship programs across the country such as Praxis help students develop their skill sets and provide a stepping stone to career opportunities.

Making college free and erasing student debt would put an end to this inventive and entrepreneurial spirit by giving millions of students an offer that will become impossible to refuse. While some students will forge the difficult path regardless of financial inducements, a sub-20 hour work week, plus amenities, plus parties, plus the good chance of a well-paying job at the end is surely more appealing than the crazy work hours and high failure rates faced by entrepreneurs. If Bernie’s plan became law, then young Americans choosing immediate work over a plush collegiate experience would be subsidizing their hard-partying peers. That’s neither a fair nor viable approach to maintaining a prosperous, innovative society.

Thousands of Millennials and Gen. Zer’s are trying their best to provide the products and services that millions of Americans need, and make a fortune in the process. Our hard-working young people don’t need presidential hopefuls crushing their dreams at gargantuan expense.

Ross Marchand is a Young Voices contributor and the director of policy for the Taxpayers Protection Alliance.