Ross Marchand
|
Posted: May 09, 2019 9:45 AM
Share   Tweet
The opinions expressed by columnists are their own and do not necessarily represent the views of Townhall.com. 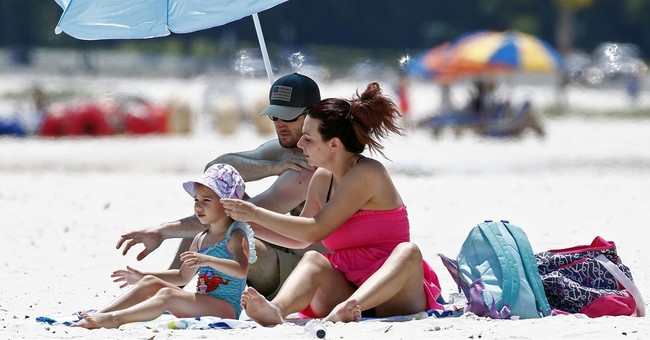 Surfs up, but you may not make it into the water safely if impaled by a flying beach umbrella. That, at least, is the concern of Sens. Robert Menendez (D-N.J.) and Mark Warner (D-Va.), who fear that their constituents can’t traipse through the sand without a bloody pole encounter. Apparently, the bottom of umbrella poles are just too sharp, and it’s up to the Consumer Product Safety Commission (CPSC) to keep umbrellas from harassing sun soakers. Instead of pressing the CPSC to double down on ridiculous regulations, lawmakers should fight onerous rules and keep innovative products on the market.

In their letter to the CPSC, the lawmakers cite data from the agency’s letter that shows, from “2008-2017 over 31,000 people sought treatment at a hospital due to an umbrella-related injury.” Over that period, the yearly average of injuries comes out to 3,194, a drop in the sand bucket compared to the more than 50 million Americans that visit the beach every summer.

The injury numbers will tend to overstate things, since as Menendez and Warner point out, the CPSC doesn’t distinguish between beach umbrellas from patio umbrellas. Even before taking that into account, there’s less than a .001 percent yearly chance that beachgoers will get injured by an umbrella, making sitting on the beach no riskier than the car ride over to the beach (especially for DC drivers heading all the way to Rehoboth).

Even if the CPSC listens to this lunacy and pressures big umbrella makers to create duller poles, it’s unclear things would even get safer. Duller poles would probably add to the already difficult process of sticking an umbrella into sand, making it more likely that high winds could catapult them into the air. The issue, and resulting hypotheticals about just how well tethered umbrellas are to the ground, highlights an interesting question for America’s safety regulator. If a product is not used as intended, and misuse causes a slew of injuries or deaths, is this enough for regulators to push for a recall?

“Consumer advocates” certainly seem to think so, as seen by the CPSC’s recent response to reports that dozens of infants have died in rocking sleepers over the past decade. The producers had warned parents that, if infants are not properly restrained by the safety belt, the babies could roll over onto their front sides and slowly suffocate. These risks are especially significant once the infant is over three months old and learns how to roll over by themselves. Unfortunately, parents did not use sleepers as intended, failing to restrain their infants and using devices even after their children turned three months old.

Like most products designed for infants, misuse has resulted in tragedy. But the CPSC responded by pressuring companies to recall these products, costing tens of millions of dollars which will inevitably be passed along to consumers. In the meantime, parents will switch to less-safe cribs or older sleepers that are anything but risk-free. Yet to bureaucrats, these unintended consequences pale in comparison to the risk of a tiny fraction of negligent parents ignoring safety guidelines. Like most regulations, bureaucrats are fine with punishing the vast majority of users who follow common-sense instructions and have positive experiences with the product.

The CPSC should reserve its relatively small manpower and resources on cases where products are actually defective and causing injuries/deaths when used properly. Strollers featuring wheels that wantonly detached should be recalled, and prompt action can prevent tragedies that are the sole result of corporate shortcuts. But beachgoers and parents desperate for some sleep shouldn’t be inconvenienced by an army of bureaucrats declaring a futile war on beach umbrella risk. Only your mother should be nagging you about the risks of lounging on the beach.