Vicarious Conversation: In the Company of Fools 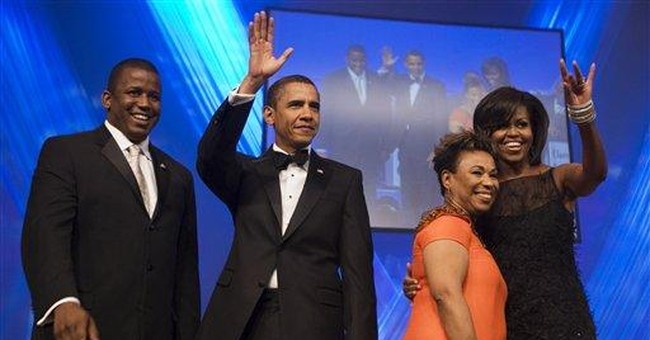 Mr. President, it's the anniversary month of your election, and --

Not well, as noted most recently by the voters in Virginia, New Jersey, and Albuquerque -- where Republicans scored upset councilmanic and mayoral victories in a reliably Democratic town.

I'm getting fitted for a classy white-tie ensemble for the Nobel ceremony where I'll take home my Peace Prize. How can you possibly say I'm performing poorly?

-- Our largest creditor, China, rightly has ripped you for your economic policies -- for ultra-low interest rates, a plunging dollar, soaring deficits, humongous bailouts and takovers, and the inflationary train roaring toward us. Gold hit its all-time high during your Sino sojourn -- a shouted message that you stabilize the dollar and get your economic game together.

-- During a war in Afghanistan, you're picking fights with the Afghan government over corruption, not to mention undermining trust in American resolve.

-- Regarding Guantanamo and the jihadists there, you've admitted you won't be able to shutter the place by the anniversary of your inauguration. Yet (a) you are investigating, with intended prosecution, the CIA interrogators who waterboarded 9/11 mastermind Khalid Sheikh Mohammad, and (b) you have decided to try Khalid and key cronies in civil courts in New York -- creating a security nightmare and, for al-Qaeda, an intelligence bonanza. As with so much else, why is any of this necessary?

-- And about Fort Hood, publicly (at least) you refuse to acknowledge it for the jihadist attack it so obviously was.

-- Abroad, you're ripping the Israelis for building settlements in East Jerusalem -- territory they've annexed after prevailing against overwhelming numbers in multiple wars. They won, the Arabs lost. It's Israeli land.

-- You've called in Bill Clinton to appeal for Mideast peace.

-- Iran continues to move toward possession of nuclear weapons, and the UN says Iran probably has numerous secret sites with centrifuges for plutonium processing -- beyond the recent lone disclosure at Qom. What was that, from the Nobel committee, about "prizing" you for all you have done for nuclear disarmament? North Korea is there, and Iran -- despite your gauzy warnings of "consequences" -- is fast on its way.

-- Copenhagen next month will generate little but more delay regarding global warming -- a topic on which a year ago you declared delay to be "not an option." China has dismissed your preachments on global warming, just as -- earlier -- India dissed Hillary Clinton's. The Senate has postponed consideration of your cap-and-trade climate-change (global-warming) measure until spring -- a postponement that might extend into forever. So much for what you have termed a "top priority."

-- An anticipated $3 trillion in debt. A slumping, unstable currency. Unemployment at 10 percent and heading heavenward. Expanded government, expanded government regulation, expanded government intrusion in the economy -- and vast new phalanxes of friendly federal enforcers. In the first year of your incumbency, the nation's principal growth industry has been...government.

-- And let's not forget health care. You and your congressional cronies are pushing the nation toward adoption of an inter-generational swindle similar to Social Security, wherein politicians are substituting their uninformed choices for the discipline of the marketplace. It is impossible to expand health insurance coverage to 36 million Americans (many of whom choose not to have it now), while (a) increasing the quality of care and (b) decreasing costs.

-- Yet your adamant determination to pass something spurred you to dispatch Bill Clinton to the Senate to urge Democrats to hang tight for a bill, any bill -- and work out the details later.

-- Currently among the details to be worked out: rationing boards (a federal task force already is calling for cutbacks in routine breast-cancer screenings); the prospect of five years in the slammer for refuseniks who neither buy health insurance nor pay compensatory taxes; federal coverage of abortion; coverage for illegals; hundreds of billions in cuts in Medicare benefits; higher patient loads and diminished compensation driving physicians into other lines of work.

Sir, on the contrary -- it's easy to understand too well. In all these areas, you're pushing to expand federal power here and plead your apologetic case abroad. And the successes in your first year are few.

The discovery of water on the moon -- a gargantuan development you had utterly nothing to do with.

Mr. President, growing numbers of Americans and voters do get it -- thus Virginia and New Jersey. They do not relish the company of fools, notably when those fools are playing with both their wallets and their security. But it's not worth arguing about.

A good friend lives by a marvelous maxim. He says, "Never argue with an idiot."