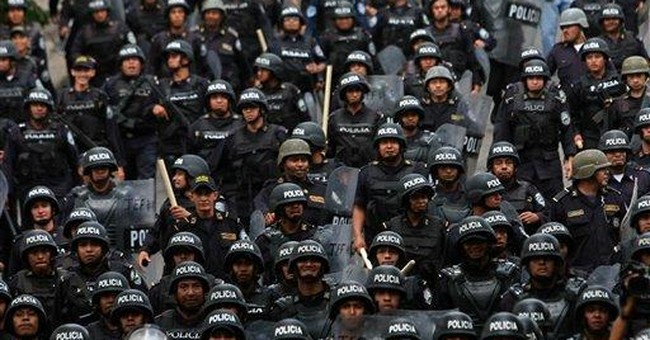 S'funny in this hour of Afghanistan, Iran, North Korea, and Iraq that perhaps nothing tells us quite so much about the incumbent D.C. administration as its behavior regarding Honduras.

The situation is this:

Three months ago, the Honduran military escorted the country's president, Manuel Zelaya, out of the country in his pajamas. After the fashion of his ideological mentor, Venezuela's Hugo Chavez, Zelaya had tried to rewrite the constitution to serve a second term - with the anticipated next step of having himself declared president for life. As The Wall Street Journal notes in an editorial:

The (Honduran) constitution strictly prohibits a change in the term-limits provision. On multiple occasions (Zelaya) was warned to desist, and on June 28 the Supreme Court ordered his arrest. Every major Honduran institution supported the move, even members in Congress of his own political party, the Catholic Church, and the country's human rights ombudsman.

A former president took the helm of an interim government. The temporary overseers said they would relinquish power upon the January inauguration of the winner of the November presidential election, whose candidates were selected prior to Zelaya's removal.

THE OBAMA administration joined a multitude of marxian regimes in "the international community" - including those in Cuba, Venezuela, Nicaragua, Bolivia, Ecuador, Brazil, and Argentina - in going ballistic. Jimmy Carter and his election-monitoring Carter Center went nuts. The essential line that all still toe: Zelaya's removal, after time-worn Latin American fashion, violated democratic principles and amounted to a coup by a neo-fascist junta.

President Obama and his secretary of state, Hillary Clinton, have taken all the predictable steps (deportation, cancellation of aid, freezing of accounts) and have announced they may not recognize the winner of the November election unless Zelaya is reinstalled.

Meanwhile, Zelaya has been secreted back into Honduras, where Brazil has given him sanctuary in its embassy - whence he is (a) directing mobs lobbing Molotov-cocktails, (b) deploring incidents of alleged gassings by "Israeli mercenaries," and (c) demanding his return to power.

ON THIS ONE, there's a lot more going around in the dark besides Santa Claus.

You might think Obamians wouldn't be aiding and abetting Fidelistas (Chavistas in Venezuela, Zelayistas in Honduras) across Latin America - or anywhere - but you would be oh-so-wrong. This administration has dusted off the ideological amendment to the Monroe Doctrine that decrees, pas d'ennemis a gauche - no enemies to the left.

The Monroe Doctrine once held that the U.S. government would suspend its principle of non-intervention in the Western Hemisphere to serve American interests. Numerous post-war administrations modified it to oppose rightist regimes, but rarely leftist. So we have variously isolated or rubbed out individuals such as Somoza in Nicaragua, Stroessner (Paraguay), Trujillo (Dominican Republic), the Duvaliers Papa Doc and Baby Doc (Haiti), and Batista (Cuba) - most of them deemed rightists more or less.

Yet we have been less adamant about Communists (Castro), Marxists (Allende), and whack-leftists (Aristide). Only under, most notably, Ronald Reagan and Bush I, did the U.S. move against leftist Latin American interests - in Grenada, in Nicaragua, in Panama. The 1989 removal of Panama's Noriega was related less to ideology than to drugs. Reagan's enterprise to back the anti-Sandinistan Contra guerrillas in Nicaragua rocked his administration to its core.

NOW THE circle has closed. On the pretext of backing the trappings of democracy, the Obama administration is siding with leftist Latin regimes to compel Honduras to violate its own constitution. This is a document written specifically to prevent the subversion of the electoral system as Hugo Chavez has done in Venezuela - and copied by his acolytes in nearby countries. Obama, Clinton, et al. are directly or indirectly intervening in Honduran affairs by assisting Zelaya in destabilizing the country and setting it up as yet another anti-American regime south of the border.

Chavez' technique in his assent to dictatorship was to gain lifelong power by subverting democratic institutions. Assure that what you want to do drips with the rhetoric of democracy, and you may get your way without the U.S. doing much about it. Prudent interests in Honduras, operating under constitutional provisions, tried to prevent that from happening. But Obama and "the international community" may yet help Zelaya succeed.

Ideology rules. Regarding the anti-leftist Colombia, for instance, America's foremost friend south of the border (and a successful battler against Chavista guerrillas), Obama and the U.S. Congress still refuse to adopt a free-trade agreement first proposed under the Bush II administration.

No enemies to the left is a mantra not limited to Latin America: It helped to bring down the Shah of Iran, and to defeat the pro-Western Moise Tshombe in the 1960s Congo and install a Communist - Patrice Lumumba (after whom the Soviets named a Russian university). In Vietnam, in the mid-1960s, President Kennedy arranged the assassination of President Diem, deemed corrupt but holding out successfully against the Vietnamese Communists. Diem's death invited the ensuing chaos and slaughter.

Obamian actions regarding Honduras may herald the future in Afghanistan. We now are hearing calls for reappraisal of the U.S. role in an increasingly unpopular war in a country with a corrupt government - and the compelling need for an "exit strategy." You know: In the unending war for liberty and security, why risk American lives in a country boasting not even the trappings of democracy?

So, soon it may be up with Honduras' Zelaya - and down with Afghanistan's Karzai.