Innovation: As With Moon Landings, So With Medicine 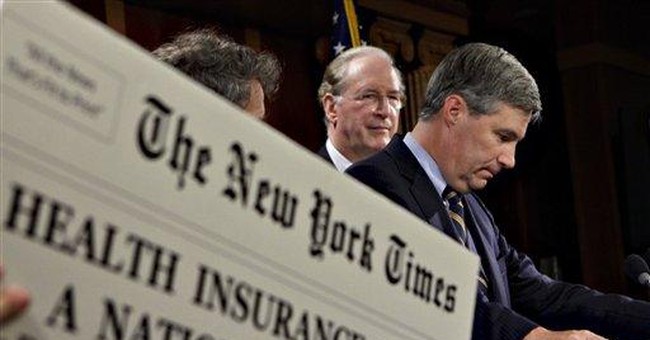 Space and health, seemingly disconnected, join to provide important lessons about the nation.

(In violation of a longtime columnar stricture against the first-person singular - in this age of the rat-trap of me, a stricture violated in columns and blogs and on television every day before breakfast - today's column includes some personal references.)

Many in their 50s and older recall vividly where they were when Neil Armstrong first walked on the moon. My wife and I and our 6-month-old son spent the night at a vacationing neighbor's house that had a color TV and ours didn't. Because of the timing of Armstrong's and Buzz Aldrin's lunar romp, we stayed up much of the night to witness this millennial adventure as it happened.

America put men on the moon and brought them back because of two powerful forces. With soaring rhetoric, President John Kennedy committed the nation to do it as fulfillment of our manifest destiny. American innovation - combined with perseverance and courage - carried the Apollo moon program to success with the flight of Apollo 11 on July 19/20, 1969. Apollo 17, in 1972, was the final flight. Neither we, nor anyone else, has been back since.

Principally, the six Apollo moon landings were the consequence of innovation. Brain power. Ingenuity. Grit. Tom Wolfe gave the ages the phrase "the right stuff" to describe the character of the astronauts. It matched a determination to make the Apollo program succeed no matter what - to venture beyond the beyond, behind the night (as World War I British poet Rupert Brooke wrote) to "some white tremendous daybreak."

Then public and governmental interest in space flagged, Congress underfunded manned-space initiatives - and today we marvel at the Apollo achievement of 40 years ago rather than at an exponentially advanced manned-space program, leaping like giants, that Apollo began.

These days, the closest equivalent of the Apollo program may be the efforts of Barack Obama, Nancy Pelosi, and their ideological soul mates to nationalize health care.

So we hear stipulations about the natural right to health care, every human's entitlement to it, and presumed necessities to lessen its cost, improve its quality, and through private insurance or a "public option" cover every American - legal and il-. And we hear can-you-top this projections and woolly commentaries about compelling needs, rationing commissions, diminished service, employer mandates, and insufferable new taxes.

Through it all, little is said about what this monumental nonsense would do to the practice of medicine in America that - through innovation reminiscent of the Apollo program - has become the envy of the world. People come to the U.S. for our liberty, our economic opportunities, our higher education, and our medicine.

I have had cancer - twice. Doctors used to attack the sites of my particular cancer surgically, and every patient died. Then treatment moved to radiation sometimes, and chemotherapy almost always - and ever new chemo and chemo protocols. And today, because of unbounded new therapies deriving from (principally) American medical innovation, my particular cancer ranks high among the most treatable.

Like countless other cancer survivors, I owe my life to precisely the medical innovation Obamacare would throttle. Medical invention requires vast sums that Obama would slash in his quixotic crusade to cut costs. Cutting costs and maximizing innovation cannot be simultaneously done.

Meaning that in the health-care debate, we now are arrived at the place we were after Apollo 17 - and asking a nearly identical question. Regarding manned space exploration, the question then was: Do we press on? The answer was no. We pulled back, halted innovation, and ceased our magnificent explorations that only men can do.

Regarding health care, the question today is: Do we press on with the innovation that has taken us to the heights in so many medical fields, or do we pull back and content ourselves with stasis - and not go where only continued innovation can lead?

Innovation is the essence of the nation - a key to its success. Obama has noted the importance of maintaining and encouraging economic and entrepreneurial innovation as the economy moves toward stabilization. He insists our prosperity depends on it.

In the interest of cancer survivors and all other beneficiaries of American medical innovation, past and future, maybe he, Obama, Speaker Pelosi, and others thus ideologically disposed should start answering that question as it relates to medicine - and answering it well. Otherwise they stand at risk of being laughed from D.C. to Canaveral for the next manned flight to the moon.