A Talk With Obama: You Can't Make This Stuff Up 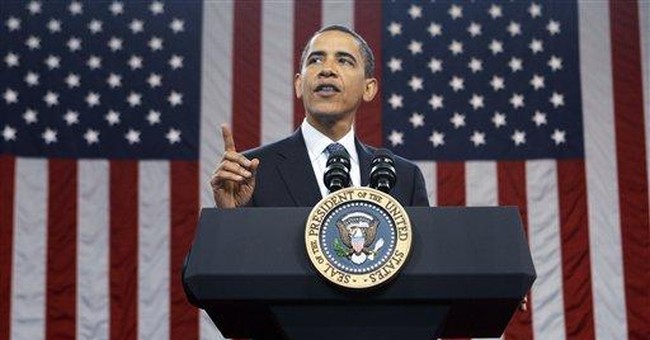 Ever wish you could rap with the president? Here's your chance - an imaginary conversation in an occasional series. Quotation marks indicate actual words Barack Obama has used.

Mr. President, thanks for the opportunity.

Happy to do it. What's on your mind?

I set an August deadline that obviously will be missed. But it will happen, as Madame Pelosi has said it will. We simply must have a public competitor to keep the private sector honest. We also need a remedy for the current system allowing doctors to limit care and rip off patients.

Do you truly believe most doctors are the enemy?

Look. "You come in and you've got a bad sore throat, or your child has a bad sore throat or has repeated sore throats. The doctor may look at the reimbursement system and say to himself, 'You know what? I make a lot more money if I take this kid's tonsils out.'" Stuff like that. It's sick. Doctors take out too many tonsils. They push too many pills.

By limiting tonsillectomies and the number of pills doctors prescribe, wouldn't you be building in to your new structure precisely the rationing you deny it would contain?

As my Budget Director, Peter Orszag, has recommended, we would have a panel of doctors and bureaucrats determining who would receive what level of care. These are difficult decisions, so it would be a distinguished panel.

Rationing by whomever, by whatever entity, no matter how distinguished, is still rationing. And how do you improve care by limiting the options available to doctors and telling them what they can charge? And with a trillion-dollar deficit already, which worries at least the Chinese, how are you proposing to finance your plan?

Through cost-savings. Look. "If there's a blue pill and a red pill and the blue pill is half the price of the red pill and works just as well, why not pay half price for the thing that's going to make you well?...Part of what we want to do is make sure that those decisions are being made by doctors and medical experts based on evidence, based on what works - because that's not how it's working now."

You want to substitute the decision-making of doctors on site with decision-making by "medical experts" rationing care from El Paso and Dubuque? And sock the taxpayers bigtime? It's hard to make this stuff up.

What's your next topic?

The minimum wage has just gone up 11 percent - to $7.25 an hour. An endless parade of studies shows that when the cost of labor rises, companies become more cautious in hiring and unemployment increases. Unemployment currently stands at 9.5 percent - a 26-year high. Given its upward pressure on unemployment, is this the proper time to raise the minimum wage?

Well, of course, that is something Congress mandated. I had little to do with it.

Yet you voted for the increase as a senator. Are you now saying you regret that vote?

No, no. We need more people employed, but the people who are employed need more money. Every employee believes that. Just ask him.

Meaning no disrespect, sir, is it then wrong to conclude you think it's better for some to be unemployed at $7.25 an hour than to be employed at $5 or $6.50?

Two foreign items. First, Honduras. Regarding the coup there, you and your administration are siding with Fidel Castro, Venezuela's Fidelista (Hugo Chavez), and every other whack-left dictator in Latin America.

My friend, my administration believes in the institution of democracy. The coup leaders installing a former president violated the principles of that revered institution. Their actions were intolerable.

Deposed president Manuel Zelaya, a Chavez acolyte, was moving to destroy democracy in Honduras and install himself as president for life there - as Chavez has done in Venezuela. There's solid logic arguing the coup was an act to preserve democracy, not destroy it.

Your other foreign question?

Afghanistan. Given the inability of any foreign power to dominate in Afghanistan - witness most recently the failed enterprises by the British and the Soviets - what are the realistic prospects for U.S. victory in the war there now?

First of all, we are not at war. Let me recall for you that four months ago, as Commander-in-Chief, I instructed the Pentagon via memorandum no longer to use such phrases as the long war or the global war on terror. I redefined what we are doing in Afghanistan as an "overseas contingency operation."

Second, as I told one of the networks, "I'm always worried about using the word victory, because, you know, it invokes this notion of Emperor Hirohito coming down and signing a surrender to MacArthur."

So if we're not seeking victory in the Afghan contingency operation, what are we doing there?

I still have my team working on that. I expect to have some answers soon. Let's save that one for next time.

Thanks for playing. And have a nice day.