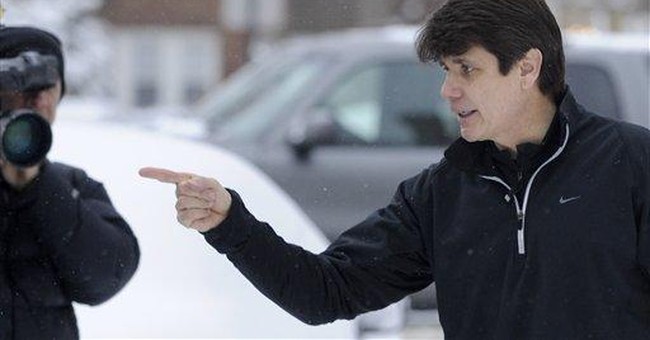 David Mendell, Barack Obama's biographer, notes that regarding Chicago's corrupt political machine, "Obama, to his credit, got through this system with very little mud on his suit."

Still -- and still. Illinois Gov. Rod Blagojevich now finds himself mired in an unpretty place. From wiretapped telephone conversations it seems Blago tried to auction to the highest bidder the Senate seat Obama relinquished Nov. 16 following his election to the presidency. And so -- in re Obama -- we come to variations on the question Howard Baker made famous about Richard Nixon in the aftermath of Watergate:

The other day an Associated Press report quoted Obama as "absolutely certain" no one around him had any dealings with Blago about the sale of the Senate seat. And various press accounts have noted the apparent distance between Blago and Obama over the years -- as well as Obama's recent efforts to move still farther from the Illinois governor.

Yet the unfolding Blago episode has to be distracting Obama during his transition cruise to the White House. It also recalls past Obama responses to questions about his connections to other unsavory Chicagoans.

For instance: Bill Ayers? Hardly knew him. Jeremiah Wright? Not the man who married Obama, baptized his children, and rendered him spiritual guidance for 20 years. Developer Antoin "Tony" Rezko -- now reportedly talking to investigators about Blago from the jail cell he occupies for corrupting political officials? Despite Rezko's 17-year relationship as a curbstone adviser and campaign contributor to Obama, it definitely would be a reach to construe him as -- you know -- a close friend.

What's more (1), Blago's successor as a Chicago congressman, Rahm Emanuel, has been chosen to become Obama's White House chief of staff. Did Emanuel, a famously four-lettering knuckle-cruncher, have any communications with Blago on behalf of Obama about who should fill the Senate seat? It seems there was at least one contact. And Emanuel would have been the logical person. According to Abner Mikva, another former congressman and federal appellate judge, and a longtime Obama mentor: Rahm Emanuel "probably had a better relationship with Blagojevich than most other politicians."

(2) David Axelrod, an Obama senior advisor, said Nov. 23 on Chicago's WFLD-TV: "I know (Obama) has talked to the governor and there are a whole range of names (for the Senate seat), many of which have not surfaced, and I think he has a fondness for a lot of them." On Dec. 9, about the time Blagojevich was becoming a page-one story, Axelrod recanted: "I was mistaken when I told an interviewer that the president-elect has spoken directly to Gov. Blagojevich about the Senate vacancy. They did not then or at any time discuss the subject."

Further, there may -- or may not -- be a disconnect between how Axelrod and Obama define reform. NBC's Steve Rhodes has dug up a 2005 Chicago Tribune op-ed by Axelrod about the indictment by U.S. Attorney Patrick Fitzgerald -- the same guy on Blagojevich's case -- of Chicago Mayor Richard Daley's patronage chief for circumventing a federal ban on political hiring. (The Wall Street Journal's James Taranto passes the op-ed quote along.) Noting "the federal bureaucracy, sheltered from politics by law, has not always been known for its responsiveness and efficiency," Axelrod wrote:

"(At a news conference) Fitzgerald proclaimed his vision of a day when the recommendations of elected officials, business, labor, and community leaders will no longer count -- a day when we entirely remove politics from government. And he seemed to be declaring his intention to use the criminal code to enforce that vision. It is this system, free of political influence, I had envisioned as a young man. But after a lifetime of observing government and participating in politics, I wonder if such radical 'reform' is really desirable."

In Chicago and Illinois politics the Machine rules. It's The Chicago Way. The Machine has produced Rod Blagojevich, an f-wording twerp now likely giving the jeebies to Barack Obama as he transitions to the presidency. Yet Obama is a self-ballyhooed reformer -- a practitioner in hope and dreams and "change we can believe in." How comforting for him to have demonstrated his commitment to change by reforming the Machine.

At bottom, the Blagojevich episode -- whether it involves Obama himself or people close to him such as Emanuel or Axelrod -- demonstrates the disconnect between Obama's deeds and his high-sounding words. He talks tirelessly about reform but was an unobjecting beneficiary of the Machine who did not reform it. Instead, "with very little mud on his suit," he treated it with deference. Likewise on issues from earmarks to education to ethanol, Obama has failed to prove through his actions he is the reformer his rhetoric proclaims.

Like Rod Blagojevich, Barack Obama is a product -- eager or acquiescent -- of the Chicago Machine. Clearly, he would prefer that any ties he might have to it recede quickly in the rear-view mirror. The Blagojevich episode gives those ties a prominence that could fracture the determined incuriosity of an Obamatized national media. And as with Bill Clinton's "bimbo eruptions," so with Barack Obama: Blago and the machine may dog him through much of his presidency.