Solzhenitsyn, Iran, and more About Folk 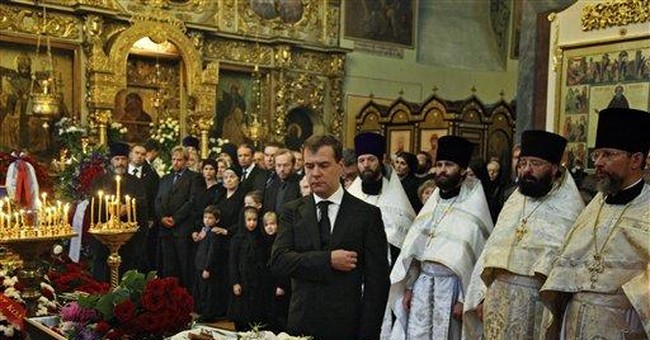 The death of Alexander Solzhenitsyn, at 89, recalls the centrality of this Russian mastodon.

A decorated artillery captain during World War II, Solzhenitsyn was arrested at war’s end for remarks in a letter to a friend vaguely criticizing Stalin (“the man with the moustache”). Subsequent years in the slave camps changed him — and Western history. His many works, most notably “The Gulag Archipelago,” detailed the criminal degradation of human dignity in an island-like chain of slave camps — first conceived by Lenin — across the Soviet inland sea.

Life there consisted in the standard devices of terror — torture, injury, disease, deprivation, extreme temperature, forced labor, near-starvation, and too-common death. Despite the West’s “desire not to know” (his words), to avert our eyes, Solzhenitsyn made us see. His catalogue of life in the camps sliced through libraries of propagandistic lies and collapsed the moral pretensions of socialism, to tell the stories of the forgotten and the dead. For, he asked, “what good is a silent memory when the forgotten deserve justice?”

With a literary genius rivaling Dostoyevsky’s, Chekov’s, Pushkin’s — even Tolstoy’s — his role was at last to render comprehensible the seemingly incomprehensible. Thereby, he joined Ronald Reagan, Margaret Thatcher and Pope John Paul II in compelling the implosion of Soviet communism. Iconic foreign-policy thinker George Kennan termed Solzhenitsyn’s writings “the greatest and most powerful single indictment of a political regime ever to be leveled in modern times.”

Novelist Saul Bellow put it this way: “In revealing the brutality of Stalinism,” Solzhenitsyn has “reminded every one of us what we owe to the truth.” Though Solzhenitsyn is gone now, the truths inhering in his writings about slavery and terror — and liberty — live eternally on.

The presidential campaign may be about a lot of things, but a single issue should prove decisive: Iran.

Despite its professions of peaceful intent, the regime there continues to build toward the production of plutonium — useful only for nuclear weapons — and the missile capability to deliver them.

Nuclear physicist Peter Zimmerman finds Iran possessing third-generation enrichment centrifuges, as well as “320 tons of uranium hexafluoride gas to feed its centrifuges, enough for almost 100 bombs. . . . If Iran begins enriching uranium to weapons grade on an assembly-line basis, it could transfer this material to groups such as Hezbollah and Hamas, which might fabricate low-technology nuclear explosives. These would probably have yields nearly as high as the bomb that destroyed Hiroshima.”

Congress seems to concern itself little about Iran or defense against its missiles. The United Nations and the left talk about economic incentives and sanctions to persuade Iran to its senses — and (as supported by Barack Obama, who urges that “we avoid provocation”) diplomacy. Some worry (or hope) President Bush will destroy Iran’s developing nuclear capability before he leaves office, or let Israel do the job — as it rubbed out Iraq’s Osirak reactor in the early 1980s and Syria’s Al Kibar reactor last September. John McCain says all options are on the table.

They should be — and the presidential outcome should hinge on how we address the developing Iranian capability. The nuclear threat posed by the Iranian regime is not imaginary but real. As Solzhenitsyn warned in his 1970 Nobel Literature Prize lecture, “The timid civilized world has found nothing with which to oppose the onslaught of a sudden revival of barefaced barbarity, other than concessions and smiles. The spirit of Munich is a sickness of the will of successful people. . . . (But) the price of cowardice will only be evil.”

How we handle Iran, now as a campaign issue and later, will determine whether regarding appeasement, too, Solzhenitsyn was right.

A recent column, based on a Weekly Standard article by World War II historian Richard Frank, spoke of how George Polk may have altered his military record, principally while in the Solomon Islands during the war, to make it look better than it was. A CBS correspondent, Polk was murdered in Greece in 1948. His death created a sensation, and an award — second in prestige only to the Pulitzers — was established in his name.

Frank presented much evidence regarding, in his words, “Polk’s fabrication of a false account of his naval service that undermines his credibility as a journalist.” My column about Frank’s article noted that I first wrote about Polk — a family acquaintance — 48 years ago.

It now turns out the Polk family possesses papers strongly suggesting Polk did not manipulate his military record. The family has provided me with three copies of documents (1) awarding Polk a purple heart, (2) authorizing him to pilot naval aircraft, and (3) flying “76 single-engine missions” and destroying enemy aircraft.

If the records are genuine (as they seem to be), then Polk was not the impostor Frank claims him to have been. The family has additional George Polk records, and there may be more to say about the man, his achievements, and the award named for him. Stay tuned.