Liberalism, the Times, and the Sliming of John McCain 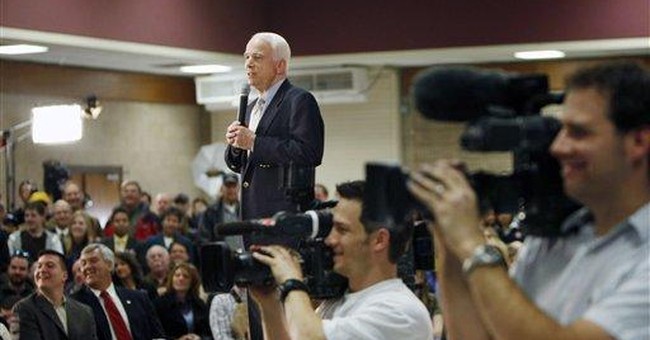 The New York Times accomplished almost overnight a consolidation of his Republican base that John McCain was encountering considerable difficulty doing. Some social conservatives were distinctly chilly toward him, with but a few reluctantly warming. Along came The Times with its slime job, and just about all the conservatives hotted up.

That's what the ideologically chi-chi Times does - or can do. It roils conservative/moderate blood.

Hollywood writer David Kahane wonders in dismay what The Times was thinking, running that half-sourced farrago of a Barbra Streisand hit-job on John McCain that snarked and sneered and amounted to . . . what? That eight years ago a sitting senator spent some time with a lobbyist who bore an uncanny resemblance to his wife . . . and you just know, deep down, that there was some canoodling going on, don't you? Come on, admit it. Even though we can't really prove it.'

As it ditched Hillary Clinton for the nebulous, platitudinous- and scary - Barack Obama, The Times chose to move McCain from his status as the left's favorite conservative to its most detested (and feared) Republican. None of what it said about his behavior rang true, and apparently none of it was.

With North Vietnam's finest shacklers and ropesmen having failed to break McCain over five years, this pea-shooter effort by the Times' best bounced off him like sleet. He denied it all calmly yet firmly, sent out his fundraisers, raked in buckets, and welcomed wavering conservatives home.

The Times should have foreseen the outcome of its McCain hit-job. But of course, blinkered as it is by ideology, it could not; just as neither it nor the mainline press for which it sets the agenda has been able to see perhaps a fundamental reason for the collapsing confidence with which it desperately is trying to deal.

The mainline press has produced a lot of reasons to explain its tanking circulation over three decades, with circulation decline translating into slumping advertising lineage, diminishing revenues, layoffs, buyouts and plummeting stock prices.

Among the offered reasons: the Internet, flight to the suburbs, transience, meism, changes in the use of leisure time, soaring percentages of women in the workforce, a shift from blue-collar to white-collar jobs (with a corresponding shift from afternoon to morning newspapers), the decline of reading in an increasingly video world.

Yet rarely cited in such litanies by newspaper people is the devout liberalism long infusing the press. It's the liberalism that the (now) late William Buckley first saw so clearly and, with such devastating eloquence, warred against.

It's the liberalism documented in the 90 percent of the Washington press corps telling pollsters they supported kook-left George McGovern for president in 1972.

It's the liberalism evident in the April 1980 preference poll of 500 of the nation's top editors, wherein just 2 percent said they wanted Ronald Reagan to be their next president, when Reagan was rolling undefeated through the Republican primaries.

It's the liberalism so smack-you-in-the-face obvious in the Pulitzer Prizes the press showers upon its ideologically favored own.

The Times' executive editor, Bill Keller, like those in the mainline press for whom he and his newspaper set the ideological agenda, denies any agenda exists. As he told Britain's Guardian in November:

"We are agnostic as to where a story may lead; we do not go into a story with an agenda or a pre-conceived notion. We do not manipulate or hide facts to advance an agenda. We strive to preserve our independence from political and economic interests, including our own advertisers. We do not work in the service of a party, or an industry, or even a country. When there are competing views of a situation, we aim to reflect them as clearly and fairly as we can."

Yet he and the mainline press do indeed work in the service of the liberalism that has driven many away from the mainline media. And such liberalism may explain why the McCain story got page-1, above-the-fold play but only a tiny headline ('McCain Disputes Article') showing above the page-1 fold directing readers to the page-20 next-day story on McCain's response.

We are in for one of the great conservative-liberal presidential battles. The very leftist Times has fired an early salvo, a backfire, really, to the conservative side's benefit.

Conservatives and Republicans know The Times and the mainline press will continue toiling on the Democratic side, whether for Sen. Obama or Sen. Clinton. The joint effort will be made to draw John McCain as leading the nation to Bush 3: Eli Pariser, executive director of Obama-supporting MoveOn.org, terms McCain "more Bush than Bush." Sen. Clinton, recalling the 2004 devastating reaction to Dan Rather's Times-like effort to sink George Bush, says, "I won't let anyone swiftboat this country's future."

POWs who, with John McCain, prevailed against the worst the North Vietnamese ropesters could dish out, were integral to the post-Rather "swiftboat" enterprise that raised questions about the character of John Kerry and so helped sink him instead. As its liberalism may have helped drive down newspaper circulation, so the liberalism of The Times- with its sliming of John McCain- may have galvanized conservatives and Republicans to prevail against the Democrats in the fall.