Women in the Military
Opinion

Ron Paul
|
Posted: May 03, 2016 10:50 AM
Share   Tweet
The opinions expressed by columnists are their own and do not necessarily represent the views of Townhall.com. 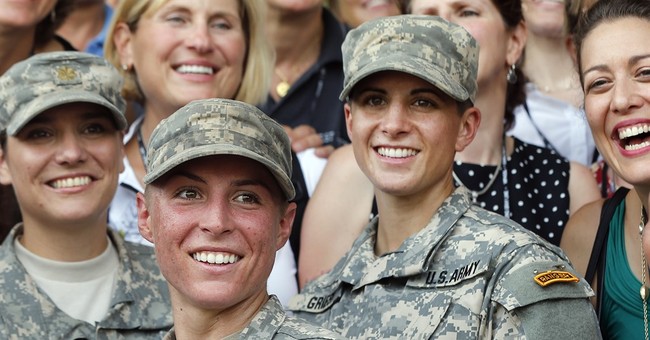 Last week the House Armed Services Committee approved an amendment to the National Defense Authorization Act requiring women to register with Selective Service. This means that if Congress ever brings back the draft, women will be forcibly sent to war.

The amendment is a response to the Pentagon's decision to allow women to serve in combat. Supporters of drafting women point out that the ban on women in combat was the reason the Supreme Court upheld a male-only draft. Therefore, they argue, it is only logical to now force women to register for Selective Service. Besides, supporters of extending the draft point out, not all draftees are sent into combat.

Most of those who opposed drafting women did so because they disagreed with women being eligible for combat positions, not because they opposed the military draft. Few, if any, in Congress are questioning the morality, constitutionality, and necessity of Selective Service registration. Thus, this debate is just another example of how few of our so-called "representatives" actually care about our liberty.

Some proponents of a military draft justify it as "payback" for the freedom the government provides its citizens. Those who make this argument are embracing the collectivist premise that since our rights come from government, the government can take away those rights whether it suits their purposes. Thus supporters of the draft are turning their backs on the Declaration of Independence.

While opposition to the draft is seen as a progressive or libertarian position, many conservatives, including Ronald Reagan, Barry Goldwater, and Robert Taft, where outspoken opponents of conscription. Unfortunately, the militarism that has led so many conservatives astray in foreign policy has also turned many of them into supporters of mandatory Selective Service registration. Yet many of these same conservatives strongly and correctly oppose mandatory gun registration. In a free society you should never have to register your child or your gun.

Sadly, some opponents of the warfare state, including some libertarians, support the draft on the grounds that a draft would cause a mass uprising against the warfare state. Proponents of this view point to the draft's role in galvanizing opposition to the Vietnam War. This argument ignores that fact that it took several years and the deaths of thousands of American draftees for the anti-Vietnam War movement to succeed.

A variation on this argument is that drafting women will cause an antiwar backlash as Americans recoil form the idea of forcing mothers into combat. But does anyone think the government would draft mothers with young children?

Reinstating the draft will not diminish the war party's influence as long as the people continue to believe the war propaganda fed to them by the military-industrial complex's media echo chamber. Changing the people's attitude toward the warfare state and its propaganda organs is the only way to return to a foreign policy of peace and commerce with all.

Even if the draft could serve as a check on the warfare state, those who support individual liberty should still oppose it. Libertarians who support violating individual rights to achieve a political goal, even a goal as noble as peace, undermine their arguments against non-aggression and thus discredit both our movement, and, more importantly, our philosophy.

A military draft is one of -- if not the -- worst violations of individual rights committed by modern governments. The draft can also facilitate the growth of the warfare state by lowing the cost of militarism. All those who value peace, prosperity, and liberty must place opposition to the draft at the top of their agenda.