A European PATRIOT Act Will Not Keep People Safe

Ron Paul
|
Posted: Mar 28, 2016 9:40 AM
Share   Tweet
The opinions expressed by columnists are their own and do not necessarily represent the views of Townhall.com. 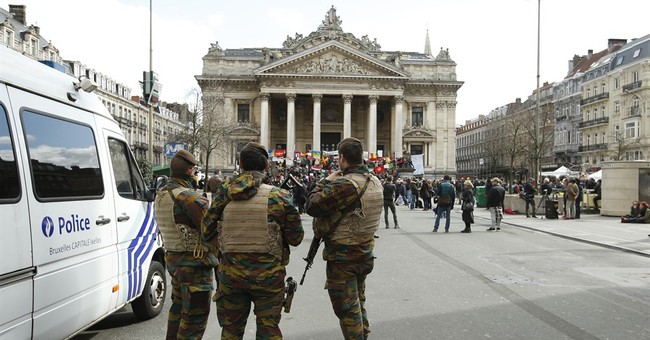 It was not long after last week's horrifying bombings in Brussels that the so-called security experts were out warning that Europeans must give up more of their liberty so government can keep them secure from terrorism. I guess people are not supposed to notice that every terrorist attack represents a major government failure and that rewarding failure with more of the same policies only invites more failure.

I am sure a frightened population will find government promises of perfect security attractive and may be willing to allow more surveillance of their personal lives. They should pause a little beforehand and consider what their governments have done so far to keep them "safe."

The government of France, for example, has been particularly aggressive in its Middle East policy. Then-French President Sarkozy was among the most determined proponents of "regime change" in Libya. That operation has left the country in chaos, with much of the territory controlled by an ISIS and al-Qaeda that were not there before the "liberation." As we learned last week from Hillary Clinton's emails, Sarkozy and British Prime Minister David Cameron were much more concerned with getting their hands on Libya's oil after the overthrow of Gaddafi. The creation of a hotbed of terrorism that could easily make its way to Europe was not important. They wanted to secure enormously profitable deals for well-connected French and English energy companies.

Likewise, European governments have been very active in the five-year, American-led effort to overthrow the Assad government in Syria. This foolish move has boosted both ISIS and al-Qaeda in Syria to the point where they nearly over-ran the country late last year. It has also led millions to flee their war-torn country for a Europe that has opened its doors with the promise of generous benefits to anyone who can make it there. Is it any surprise that so many hundreds of thousands took them up on the offer? Is it any surprise that in this incredible flood of people there may be more than a few who are interested in more than just free housing and a welfare check?

Europeans should be demanding to know why their governments provoke people in the Middle East with aggressive foreign policies, and then open the door to millions of them. Do their leaders just lack basic common sense?

Usually the so-called security experts who advise more government surveillance after a terrorist attack have a conflict of interest. They often benefit when the security state is given a bigger budget. Insecurity is the bread-and-butter of the security "experts." But why is it that after a terrorist attack, governments are rewarded with bigger budgets and more power over people? Shouldn't failure be punished instead of rewarded?

As in the United States, the security crisis in Europe is directly tied to bad policy. Until bad policy is changed, no amount of surveillance, racial profiling, and police harassment can make the population safer. Europeans already seem to understand this, and as we have seen in recent German elections they are abandoning the parties that promise that the same old bad policies will this time produce different results.

Hopefully Americans will also stand up and demand a change in our foreign policy before bad policy leads to more terrorist violence on our shores.