Ron Paul
|
Posted: Jan 11, 2016 10:59 AM
Share   Tweet
The opinions expressed by columnists are their own and do not necessarily represent the views of Townhall.com. 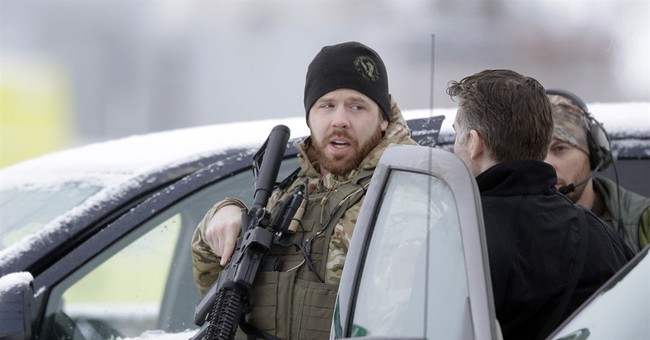 The nation's attention turned to Oregon this week when a group calling itself Citizens for Constitutional Freedom seized control of part of a federal wildlife refuge. The citizens were protesting the harsh sentences given to members of the Hammond ranching family. The Hammonds were accused of allowing fires set on their property to spread onto federal land.

The Hammonds were prosecuted under a federal terrorism statute. This may seem odd, but many prosecutors are stretching the definition of terrorism in order to, as was the case here, apply the mandatory minimum sentences or otherwise violate defendants’ constitutional rights. The first judge to hear the case refused to grant the government’s sentencing request, saying his conscience was shocked by the thought of applying the mandatory minimums to the Hammonds. Fortunately for the government, it was able to appeal the decision to judges whose consciences were not shocked by draconian sentences.

Sadly, but not surprisingly, some progressives who normally support civil liberties have called for the government to use deadly force to end the occupation at the refuge. These progressives are the mirror image of conservatives who (properly) attack gun control and the Patriot Act as tyrannical, yet support the use of police-state tactics against unpopular groups such as Muslims.

Even some libertarians have joined the attacks on the ranchers. These libertarians say ranchers like the Hammonds are “corporate welfare queens” because they graze their cattle on federal lands. However, since the federal government is the largest landholder in many western states, the ranchers may not have other viable alternatives. As the Oregon standoff shows, ranchers hardly have the same type of cozy relationship with the government that is enjoyed by true corporate welfare queens like military contractors and big banks. Many ranchers actually want control of federally-held land returned to the states or sold to private owners.

Situations like the one in Oregon could become commonplace as the continued failure of Keynesian economics and militaristic foreign policy is used to justify expanding government power. These new power grabs will increase the threats to our personal and economic security. The resulting chaos will cause many more Americans to resist government policies, with some even turning to violence, while the burden of government regulations and taxes will lead to a growing black market. The government will respond by becoming even more authoritarian, which will lead to further unrest.

Fortunately, we still have time to reverse course. The Internet makes it easier than ever to spark the ideas of liberty and grow the liberty movement. Spreading the truth and making sure we can care for ourselves and our families in the event of an economic collapse must be our priorities.

We must help more progressives understand that allowing the government to run the economy not only leads to authoritarianism, it impoverishes the lower classes and enriches the elites. We must also show conservatives that militarism abroad inevitably leads to tyranny at home. We also need to continue exposing how the Federal Reserve feeds the welfare-warfare state while increasing economic instability and income inequality. This week’s Senate vote on Audit the Fed is important to our efforts to help the American people learn the full truth about our monetary system.

One thing my years in Washington taught me is that most politicians are followers, not leaders. Therefore we should not waste time and resources trying to educate politicians. Politicians will not support individual liberty and limited government unless and until they are forced to do so by the people.