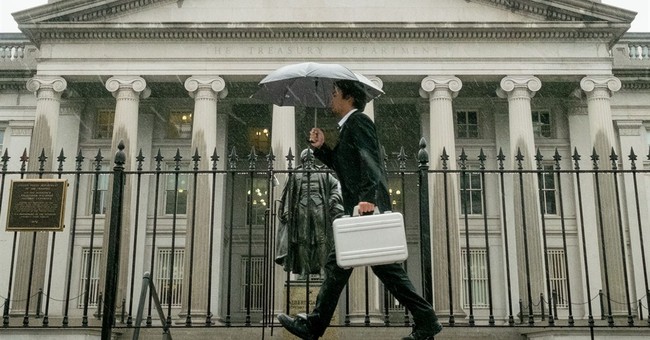 Over the last weekend it was announced that the United States of America's Treasury Dept. took in more revenue over the 1st 5 months of the 2014 fiscal year than ever before. It took in $28 billion more than in 2007 as well as cutting spending from the budget, getting rid of the 2% social security tax cut and increasing capital gains taxes from 15% to 20%. We did have some increases in our entitlement programs but we even had a drop in the amount of interest paid on the national debt. And we cut the budget by over $80 billion. After reading this I was ready to hoist the American flag to new heights in my castle, but unfortunately I continued reading. Our deficit was lower; from the high $400 billion to $379 billion for the five months ended February 28, 2014.

Annualized our deficit is just under $1TRILLON !!!

I spent Sunday mentioning what I just wrote to a various cross section of non-English speaking people or I just assumed that because nobody made a sound, comment or fell over from fainting, I am going to take a stab at it and just say it certainly isn't as important as finding out if anyone is still alive for the $1 billion prize for filling out a perfect bracket for March Madness. According to the Heritage Foundation the top 10% of wage earners earn 45% of all the revenue created and pay 71% of all the federal taxes (figures from 2010). The lowest earnings for this group is $116,6000 per year. I guess I probably didn't talk to anyone in this group, or they didn't understand what I was trying to say. Freely translated I tried to tell them we are paying way too much and it still doesn't help. Could it be that the select group cited above needs to pay above 90% of what they make to balance the books?

We have only one solution and it better be adopted quickly if we want to keep this country moving in any direction, let alone the right direction. We must not lower our deficit over 5 to 10 years as is always proposed by Congress, the Senate or the President. We must close down the deficit spending window immediately. That isn't as easy to do as it is to say, because we have a large list of mandatory expenditures from the past that for lack of a better word are mandatory. We start by simply ending discretionary spending. That would of course immediately cause a rash of heart attacks, gastroenteritis and wheezing from our legislatures, numerous foreclosures and the total disappearance of at least 10-15% of these fine public servants.

When the commotion subsides is when we start to save our country and insure our future. We must have a law in place that doesn't allow deficit spending. Think about it in terms of your life. If you make a certain amount of money, and do not anticipate increasing or decreasing that amount, and you have very little left at the end of month, then borrowing money to help you maintain your current standard of living will not work out. How could you pay it back if nothing on the income side changes but you increase the outflow of your money? That my friends is a simply analysis of what is burying us as a nation.

I close with the idea that all of us should be interested because it is our lives, our kid’s lives and everyone's happiness that is being recklessly spent by a bunch of no good, public dis-servants.