America's Survival Is At Stake 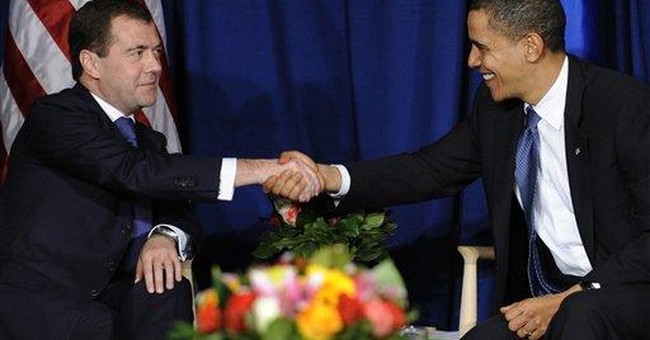 Never before in our history has an American president, deliberately and by design, risked our very survival to a maniacal enemy power sworn to remove America from the world. Yet from all appearances, this is exactly what Obama is doing by failing to vigorously oppose Iran’s acquisition of nuclear weapons. But in spite of the fact that over 60% of the public favors militarily destroying Iran’s nuclear facilities, there’s nary a word of protest from the Republicans in opposition. They’re so paranoid about being labeled warmongers, they have shamefully abdicated their own national security responsibilities, just as John McCain did during his presidential run.

Obama is weakening rather than strengthening our missile defenses. That’s how seriously this Administration takes the Iranian threat.

The reality is that the fanatical, messianically driven radical Iranian zealots will pay any price, including Iran’s virtual obliteration, in order to render the U.S. and its major allies non-players on the world scene. The mullahs expect to emerge from the ruins no longer hindered by the “Great Satan,” free to use their huge oil and gas reserves to fund the imposition of their tyranny throughout the Middle East and beyond.

Not only does Obama’s psyche make him incapable of understanding the radical’s mentality but he chooses to totally dismiss their own pronouncements spelling out their sinister intentions. Obama’s determination to make the United States subservient to an international body of nations is now driving him to systematically reduce our nation to a mere shadow of its former power and influence. He seeks to leave us virtually undefended against a missile attack, dramatically weaken our military, leave Iraq on its own, deny us the ability to win in Afghanistan and relinquish our unpopular but all-important role as world policeman. The practical consequences of Obama’s extreme radical left agenda can only be to put our nation at the mercy of a new world order dominated by ruthless tyrants, thugs and spineless states who sell their souls for commercial gain. His first allegiance is to such an international order – not to the United States.

Obama is not only unfit to serve as commander-in-chief in a time of war, he is a menace to our national security. His obvious intent to allow Iran to obtain nuclear weapons, perhaps under the guise of what would undoubtedly be a totally meaningless agreement not to do so, presents a risk so grave to our survival that it can only be rationally viewed as tantamount to national suicide. Under no circumstances can the mullahs be trusted to honor any agreement, as they’ve proven time and again.

Obama has an agenda that in my view is un-American, for it is absolutely contrary to the most fundamental and essential interests of our nation. Obama seems too willing to ignore internal strife of other nations, characterized by his refusal to lend encouragement and assistance to freedom-seeking Iranian protestors is a moral outrage.

Given the President’s extreme core beliefs and actions, every effort should be made to rally all Americans against him and his policies. How else can we shake our apathetic citizenry out of its blind disengagement with our national security? Tragically, we are sleep walking in a political wilderness in which too few people are willing to wake up to the unfortunate appeasement and equivocating of President Barack Obama.

No president has had a higher constitutional duty than to protect our nation against foreign attack. By almost any standard, Obama is flagrantly guilty of dereliction of duty. It cannot be overemphasized how extraordinarily perilous a situation we are in, especially at a time when virtually the entire Republican Party is AWOL on bombing Iran and strengthening national security. There is no counterweight to Obama’s disastrous policies. Obama himself recently acknowledged that if terrorists get nuclear weapons “we have every reason to believe they will use them.” Despite this admission, he refuses to take the only action that will stop them from acquiring such weapons.

If we citizenry will not take the bull by the horns and demand a total reversal of our nation’s suicidal course, we could very soon experience the apocalyptic end of the America we love and all western civilization. Let us understand that the maniacal, radical Islamic enemies confronting us are irreversibly committed to making such a cataclysmic event happen – no matter how horrific the cost to them. To think that an olive branch of brotherly love could change their goals is sheer madness.

Take heed America, Obama’s policies may be paving the way for a nuclear doomsday.