Election 2014: A Reward for Gridlock, A Repudiation of the President 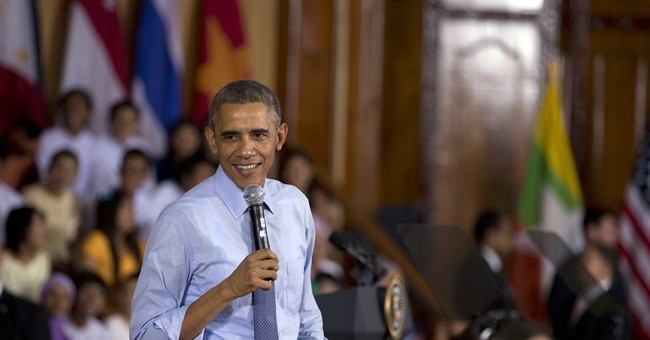 “All politics is national” now, which made this midterm election yet another referendum on President Obama, and it has turned out to be another overwhelming repudiation of the president, who already suffered one debacle back in 2010. This appears to have been a baffling rejection to this supremely detached president …

In his news conference following Tuesday’s election, President Obama said that “The resounding message of the American people is, ‘Get stuff done’.”

What nonsense. The “resounding message” was, “We don’t like what you’re doing, Mr. President.”

The American people are not weary of gridlock. They are weary of Barack Obama, his unsteady leadership and his political agenda.

The disillusionment with Mr. Obama and his party has been augmented by the opposition of Republicans to them. For that opposition, the GOP was rewarded at the polls – and rewarded massively, even historically. “In a /NBC News poll released (just before the election), 67% of registered voters said they want to see Mr. Obama change the direction he is leading the country ‘a great deal’ or ‘quite a bit’,” writes journalist Carol E. Lee.

This is particularly striking in light of the President’s comments last month at Northwestern University: “I am not on the ballot this fall. Michelle is pretty happy about that. But make no mistake: (My) policies are on the ballot -- every single one of them.”

If that was true, and at least substantially it was, it is indisputable that on November 4 Mr. Obama’s policies were repudiated, decisively and in such a sweeping manner as to have reduced many pundits and political scientists into states of near-mumbling.

If, then, Mr. Obama wants to “get stuff done,” he needs to change course. He might learn from Bill Clinton who, in light of the Republican triumph of November 1994, said in his January 1995 State of the Union address, “The era of big government is over.”

A question along these lines was posed by Fox News White House correspondent Ed Henry when he asked the President if he would “pull a page from Bill Clinton’s playbook” and try to compromise with the GOP. Mr. Obama deflected this question, saying “what I’d like to do is to hear from the Republicans to find out what it is that they would like to see happen.”

Two observations: First, having long jettisoned any allegiance to personal integrity, the ever self-occupied Bill Clinton worried about his popularity and re-electability such that he wanted to gain credit for accomplishing things. Thus, he had the audacity to mention seven of the ten items in the “Contract with America” in his 1996 acceptance speech at the Democratic Convention and sound as though they were his priorities.

Barack Obama is not quite so inauthentic and, therefore, is less adept at the kind of stunning alacrity Bill Clinton displayed in using conservative language to surprise and disorient his political adversaries even as he continued his pursuit of liberal policies.

Still, for whatever reasons, Mr. Clinton did agree to some tax reductions for companies, approved such things as the adoption tax credit, and accepted the GOP’s welfare reform plan with a few modifications. Such similar “common ground” moments are less likely in the era of Barack Obama and an ideologically stentorian and ever-more Leftist Democratic base.

Mr. Obama is confined politically by that base. It makes his maneuverability much less capacious than that enjoyed by Bill Clinton. The hardened liberalism of many House Democrats and their allies on the Senate discourages compromise. Consequently, it is likely that not very much “stuff” will get done.

Second, not to have heard what Republicans have been saying for the past two years the President must have been either deaf or disinterested. Although it’s always good when opponents talk, I doubt one more meeting will enlighten him with respect to GOP priorities.

Still, at least in his private counsels, Mr. Obama should be doing some serious consideration of how he can at least find ways to moderate his agenda such that if “getting stuff done” indeed is his goal, he can reason together with his partisan foes and reach accord on at least a few things.

Perhaps the operative phrase in the above paragraph is “a few things.” On most things, there is little or no common ground. This means that congressional Republicans will have to oppose what Mr. Obama wants to do, not with shrillness or personal antagonism but with the foreknowledge that such opposition will have to be consistent and resolute throughout the balance of the President’s term.

The President and his allies will complain that their outreach to Republicans has been rebuffed for political purposes, not substantive reasons. This is, in part, true: Politicians who have their own agendas (most particularly, winning elections, especially their own) tend not to want to accede to things they think will benefit their opponents. This is as true for Democrats as Republicans. Always has been, always will be.

Yet there is a larger issue at play, one quite distinct from partisanship simply for the sake of majoritarian power. It is that philosophical rifts between the parties are so pronounced that common ground between them is rather small and even shrinking.

Fundamentally, Republicans in Congress and President Obama want very different things, which is why the legislative traffic on Washington’s grid remains largely locked.

In an op-ed earlier this month in the Wall Street Journal, Mitch McConnell and John Boehner say that a “common ground” agenda with the White House can include:

… authorizing the construction of the Keystone XL pipeline, which will mean lower energy costs for families and more jobs for American workers; the Hire More Heroes Act, legislation encouraging employers to hire more of our nation’s veterans; and a proposal to restore the traditional 40-hour definition of full-time employment, removing an arbitrary and destructive government barrier to more hours and better pay created by the Affordable Care Act of 2010. We’ll also consider legislation to help protect and expand America’s emerging energy boom and to support innovative charter schools around the country.

At least for the sake of argument, let’s say each one they list is a good idea. However, this is a relatively “small ball” agenda; when later in the article the two leaders discuss a broader program of tax reform, debt reduction and reforming the bureaucracy, a smirk seems to spread, shadow-like, across the page.

Perhaps most importantly, what about the priorities of those who “brought them to the dance,” Evangelical Protestants and traditional Catholics? According to CNN data, 26 percent of the voters in the election identified as “White Evangelical or Born-Again Christian;” nearly 80 percent of them voted Republican. For these voters, issues relating to the sanctity of life, marriage as the union of one man and one woman and religious liberty protections are critical. Do they have a place on the McConnell-Boehner agenda?

The Chief Executive obviously is essential to this whole set of equations. Yet as an exasperated Dana Milbank wrote in today’s Washington Post:

“I hear you,” President Obama said to the voters who gave Democrats an electoral drubbing in Tuesday’s midterm elections. But their message went in one presidential ear and out the other … It’s true that voters are disgusted with both parties, but they were particularly unhappy with Obama. In exit polls, 33 percent said their votes were to show disapproval of him.

Milbank says that “Though he had called Democrats’ 2010 losses a ‘shellacking,’ he declined even to label Tuesday’s results.” Later in his piece, Milbank concludes that Mr. Obama’s “solution was to defer responsibility.”

This election was not a plea by the voters for the politicians just to “get stuff done.” It was a demand that Mr. Obama and his allies in Congress change course. This, to remain the ideologically-defined Democrats they are, they cannot and will not do.

So, it’s up to the GOP to recognize, strategize and operate accordingly. Their electoral future is at stake. More importantly, so is the country’s.

Can Matt Drudge survive without the MAGA faithful?
Hotair
Biden CNN Town Hall: Lies, a Snotty Comment and a Whole Lot of ‘What the Heck Did He Say’
Redstate