Robert Wasinger
|
Posted: Jun 04, 2019 1:34 PM
Share   Tweet
The opinions expressed by columnists are their own and do not necessarily represent the views of Townhall.com. 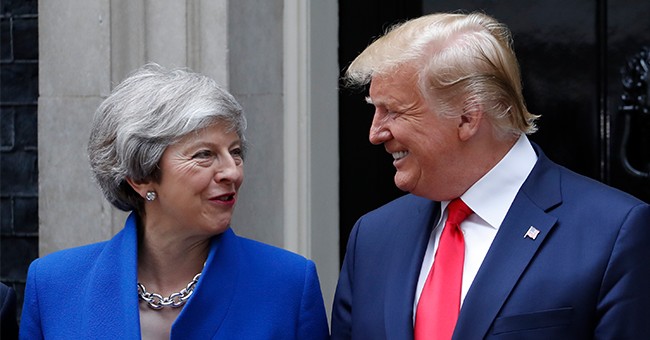 President Trump is the victim of widespread misinformation wherever he goes, but the nonsense surrounding his state visit to the United Kingdom is in another league.

During the trip, the president had to contend not just with the American fake news media and the Democrats, but also with the famously savage British press and kook British leftist politicians trying to raise their own profiles by slamming Trump.

Matters are made worse by the fact that Brexit — the shock to the British establishment that closely paralleled the election of Donald Trump — just got another decisive “yes” from the British people. Much to the chagrin of the globalists who detest Donald Trump, Nigel Farage’s Brexit Party took first place in the U.K.’s elections for European Parliament a mere six weeks after the Party’s founding, and anti-Brexit parties failed to deliver anything like a rebuke to 2016’s referendum decision to withdraw from the European Union.

A wounded animal is at its most vicious, and that’s true of politicians, as well. Still licking their wounds from Brexit’s second big win, the British left is lashing out at the biggest symbol they can find for their troubles: the visiting president of the United States.

London’s attention-hungry leftist mayor, Sadiq Khan, ran his mouth again, calling the president a “growing global threat” and reiterating his Party’s contention that Donald Trump is too controversial to visit the U.K.

If Khan is sincere in his assessment, then he must believe that Donald Trump is more of a “threat” than notorious anti-white, anti-Semitic lunatic “Minister” Louis Farrakahn, who, as the Nation of Islam’s lawyer, Kahn fought and failed to get admitted to the U.K. after authorities banned him.

Meanwhile, British anti-Brexit activists are “trolling” the president on Twitter during his visit, posting slides pointing out that President Barack Obama had a higher approval rating among British citizens than Trump does.

Like the Norwegian committee who awarded Barack Obama the Nobel Peace Prize after a few months in office, these Brits by and large have no idea what they actually like about Barack Obama, and would probably struggle to name one relevant accomplishment of his. They simply cling to the rosy “hope and change” image that the media relentlessly promoted while exempting Obama from serious criticism.

Donald Trump, on the other hand, is portrayed as a dark, foreboding cloud, invading Britain’s airspace in the form of the pathetic “Trump baby” balloon that has been lionized by the leftist press in both countries.

This is all part of a massive disinformation campaign that goes far beyond our shores. The media, the British left, the Democrats here in America — and the wealthy globalist donors propping them all up — are desperately trying to discredit and scandalize President Trump.

The tough talk and unapologetic nationalism of the current occupant of the White House terrifies these elites as much as Brexit does. They’re two sides of the same coin, as evidenced by Khan and the others’ ceaseless attempts to smear both with the same tired brush: they use epithets such as “racist,” “fascist,” “xenophobes,” and others to distract from the fact the people on both sides of the Atlantic are tired of the failed globalist ideology.

All the money in the world can’t stop the truth, and even the world’s most noxious liberal propagandists can’t ruin President Trump’s visit to the United Kingdom.