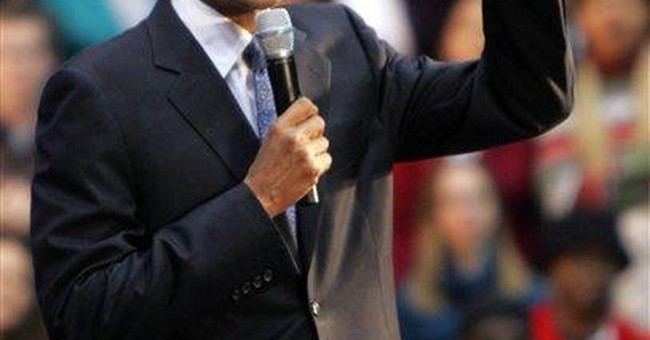 WASHINGTON, D.C. -- Supporters of Sen. Barack Obama concede that Sen. Hillary Clinton's aggressiveness rescued him from a serious blunder in last Tuesday's presidential debate at Cleveland, when he hesitated at rejecting a lavish endorsement of him by black Muslim leader Louis Farrakhan.

Obama deplored Farrakhan's record of anti-Semitic comments but indicated he could not reject his backing -- a horrible gaffe for a rookie presidential candidate. But Clinton could not let it rest at that and burst in to say that she had rejected backing for her 2000 Senate candidacy in New York from the Independence Party, some of whose leaders had taken anti-Semitic positions. That gave Obama a chance to assert that, considering her example, he indeed would reject Farrakhan.

A footnote: Supporters feel Obama did err in repeatedly referring to Farrakhan with the honorific of "minister," instead of calling him Mr. Farrakhan or just plain Farrakhan.

Hillary Clinton's otherwise inexplicable complaint at the start of Tuesday's Cleveland debate about always being called on first by debate questioners was a planned use of "Saturday Night Live's" comedic treatment of news media favoritism for Barack Obama.

Clinton aides had been on the phone with many journalists to point up "Saturday Night Live's" satire depicting the solicitous media asking: "Sen. Obama, are you comfortable? Is there anything we can get for you?" Consequently, NBC questioners Brian Williams and Tim Russert were prepared for Clinton bringing up the skit, but never expected the way she did it.

Close supporters of Mitt Romney have been injecting into the political rumor stream an unsubstantiated report that Sen. John McCain obtained the vital endorsement of Florida Gov. Charlie Crist by promising him the vice presidential nomination.

Spreading that rumor reflects the anger in the Romney camp over the late endorsements of McCain by Crist and Sen. Mel Martinez of Florida. Until then, the Romney insiders claim, their private polls showed a lead in the Jan. 29 Florida primary that in fact delivered a crushing victory for McCain.

A footnote: Karl Rove and other prominent Republicans are talking up a McCain-Romney harmony ticket despite personal dislike between the two presidential candidates. Romney also would have to overcome opposition to him going on the ticket by his closest advisers.

Newt Gingrich's efforts to restore his standing among Republican conservatives for a possible future presidential bid have suffered a self-inflicted setback because of the former House speaker's support for liberal Rep. Wayne Gilchrest's unsuccessful attempt to save his seat in Congress representing Maryland's Eastern Shore.

Gingrich came to the state capital of Annapolis to host a fund-raiser for Gilchrest. While they are at odds on Iraq and other issues, Gingrich praised Gilchrest's intellect, courage and especially his work to conserve the Chesapeake Bay.

Gilchrest was defeated in the Feb. 12 Republican primary by conservative State Sen. Andrew Harris, who was backed by former Gov. Bob Ehrlich and the conservative Club for Growth. Harris' backers are furious at Gingrich and vow to make him pay if he ever runs for president.

Despite recent favorable polls, Illinois Democratic leaders fear that former House Speaker Dennis Hastert's district is too Republican for a Democrat to win in next Saturday's special election.

Oberweis, who has lost three GOP primaries for statewide office, is a controversial figure inside the Republican Party. Nevertheless, losing the former speaker's old district would be heralded as a harbinger of a big Democratic year ahead.