Our Man in Islamabad 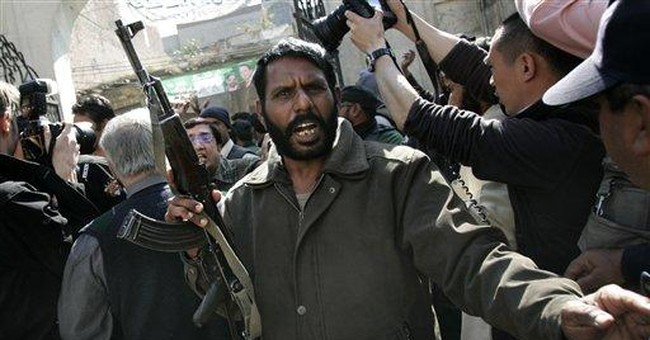 WASHINGTON, D.C. -- Overwhelming repudiation of President Pervez Musharraf by Pakistan's voters did not immediately dilute the Bush administration's support for him. On the contrary, the first election returns were barely in Monday night when the U.S. government began pressing victorious opposition leaders not to impeach the former military strongman.

Publicly, State Department spokesman Tom Casey reminded that Musharraf "is still the president of Pakistan" and expressed hope "whoever winds up in charge of the new government would be able to work with him." Privately, U.S. diplomats pushed hard against any effort to dislodge the now retired army general who had just suffered public rejection, unprecedented in Pakistan's 60 years, from the office he retained last year by nefarious means.

The United States had guessed wrong again in pinning hopes on an authoritarian, anti-democratic foreign leader. Musharraf follows the pattern of South Korea's Syngman Rhee, the Shah of Iran and Ferdinand Marcos of the Philippines, all of whom went into exile after public rejection. But Musharraf remains "our man in Islamabad," counted on by Washington to battle Islamist terrorists -- including Osama bin Laden -- despite his inconstant effort.

Foggy Bottom's stubborn policymakers are frozen in an irrelevant mindset, dating back to their effort last year to broker a shared partnership between Musharraf as president and the assassinated Benazir Bhutto as prime minister. In her posthumous memoir ("Reconciliation: Islam, Democracy and the West") published this week, Bhutto detailed Musharraf's perfidy in reneging on power-sharing agreements made with her in two meetings last year. Instead, he engineered his election as president by a lame-duck parliament, purged the judiciary, imposed martial law and refused to resign from the army until virtually forced by Washington.

Since Bhutto's murder, Assistant Secretary of State Richard Boucher has antagonized Pakistan's opposition leaders by insisting Musharraf was committed to a "good" election while in fact voting rolls were being rigged. Minimal election-day vote fraud is attributed to Musharraf's weakness rather than strength. The army refused its cooperation needed to really steal votes. According to Pakistani sources, the army high command was alarmed that Musharraf's unpopularity had undermined public esteem for the military.

These changes apparently escaped the U.S. embassy in Islamabad, which on election eve reported to Washington that Musharraf's Pakistan Muslim League-Q would do well enough to force a coalition government. Vote rigging probably cost the opposition 25 seats, mainly in Baluchistan -- not enough to prevent a two-thirds majority by opposition parties that could vote impeachment in the lower house.

Officials of Bhutto's Pakistan People's Party (PPP) say that while Musharraf deserves impeachment, they would not move against him if he showed any humility. But the general has not departed from his habitual arrogance, even at the moment of humiliation.

In "Reconciliation" (concluded shortly before her death), Bhutto was careful to avoid an anti-American posture, but still details Washington's long record of support for Pakistan's military regimes that overturned democratically elected leaders. I must report that my late partner Rowland Evans and I followed that line of reasoning as necessary to enlist Pakistan as an ally against the Soviet Union in the Cold War.

This outlook by government has persisted in the war against Islamist terrorism, though it has been increasingly clear that Musharraf would not vigorously pursue that conflict. I was impressed when I talked to Bhutto in New York last summer to find her committed against the extremists inside Pakistan in a way Musharraf never has been. "The core of my being a Muslim," she wrote in her posthumous memoir, "rejects those using Islam to justify acts of terror to pervert, manipulate and exploit religion, for their own political agenda."

Those sentiments reflect how much Benazir Bhutto will be missed. Her widower, Asif Ali Zardari, succeeding her as PPP leader, will not take the prime minister's post. Whoever does head the new Pakistani government cannot be counted on to pursue the risky course of closing madrassa schools and fighting al-Qaida in tribal lands that Bhutto promised. No Pakistani expects help from Musharraf, repudiated by the public and not backed by the army now that he has removed his uniform. Only the State Department still takes him seriously.