Is McCain a Conservative? 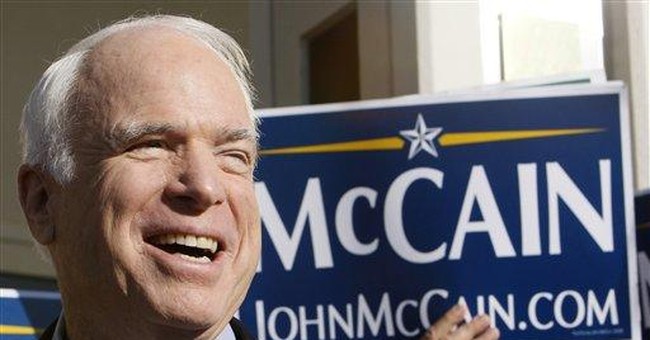 WASHINGTON, D.C. -- As John McCain neared his momentous primary election victory in Florida after a ferocious campaign questioning his conservative credentials, right-wingers buzzed over word that he had privately suggested that Supreme Court Justice Samuel Alito was too conservative. In response, Sen. McCain recalled saying no such thing and added Alito was a "magnificent" choice. In fact, multiple sources confirm his negative comments about Alito nine months ago.

McCain, as the "straight talk" candidate, says things off the cuff that he sometimes cannot remember exactly. Elements of the Republican Party's right wing, uncomfortable with McCain as their prospective presidential nominee, surfaced the Alito comments long after the fact for two contrasting motives. One was a desperate effort to keep McCain from winning in Florida. The other was to get the party's potential nominee on record about key issues before he is nominated.

The latter has no pretensions of changing McCain's firmly held non-conservative positions on such issues as campaign finance reform and global warming. Rather, they want two assurances: first, that McCain would veto any tax increase passed by a Democratic Congress; second, that he would not emulate Gerald R. Ford and George H.W. Bush in naming liberal justices John Paul Stevens and David Souter.

That is the background of conservative John Fund's Wall Street Journal online column the day before Florida voted. He wrote that McCain "has told conservatives he would be happy to appoint the likes of Chief Justice Roberts to the Supreme Court. But he indicated he might draw the line on a Samuel Alito because 'he wore his conservatism on his sleeve.'" In a conference call with bloggers that day, McCain said, "I don't recall a conversation where I would have said that." He was "astonished" by the Alito quote, he said, and repeatedly tells town meetings, "We're going to have justices like Roberts and Alito."

I found what he could not remember was a private, informal chat with conservative Republican lawyers shortly after McCain announced his candidacy in April 2007. I talked to two lawyers present whom I have known for years and who have never misled me. One is neutral for president, and the other recently endorsed Mitt Romney. Each said they were not Fund's source, and neither knew I was talking to the other. They gave me nearly identical accounts, as follows:

"Wouldn't it be great if you get a chance to name somebody like Roberts and Alito?" one lawyer commented. McCain replied, "Well, certainly Roberts." Jaws were described as dropping. My sources cannot remember exactly what McCain said next, but their recollection is that he described Alito as too conservative.

Meanwhile, anti-tax activist Grover Norquist is worried about a prominent journalist informing him that McCain a few years ago said to him, off the record, that as president he would have to raise taxes. McCain more recently has told me, on the record, he never would support a tax increase and, consequently, favors making permanent the Bush tax cuts.

Norquist and McCain have a stormy personal relationship. As Senate Indian Affairs Committee chairman, McCain in 2005 subpoenaed records of Norquist's dealings with imprisoned Republican lobbyist Jack Abramoff. Denying wrongdoing, Norquist said McCain held a grudge against him for campaigning against the senator's 2000 presidential bid. Norquist told me he has no personal animus and only wants assurance that McCain opposes higher taxes.

According to exit polls, voters calling themselves "very conservative" supported Romney in Florida by two to one, and McCain still won in a state described as a microcosm of America. McCain survived a scathing assault on conservative talk radio led by Rush Limbaugh. Romney's appeal to the right on immigration backfired, triggering Sen. Mel Martinez's endorsement of McCain and a five-to-one vote for him by the Cuban community.

McCain as the Republican nominee would need those "very conservative" voters. He will encounter some of them at the Conservative Political Action Conference (CPAC) in Washington Feb. 7-9. His campaign Wednesday asked for McCain to speak there after rejecting an invitation to last year's meeting. At CPAC, he might well consider providing "straight talk" about Samuel Alito and promising to veto any tax increase by a Democratic Congress.