To Block Schumer, Name Mike Lee to the Supreme Court

Robert Morrison
|
Posted: Jan 14, 2017 12:01 AM
Share   Tweet
The opinions expressed by columnists are their own and do not necessarily represent the views of Townhall.com. 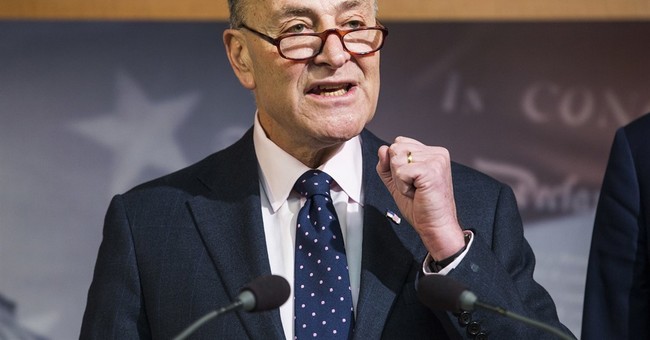 Schumer recently threatened to block any Supreme Court nominee who does not pass his litmus test for judicial radicalism. Schumer has a lot of practice in this. He has invented his own clever religious test for conservative judicial nominees. Although he would never call it a religious test, Schumer goes after conservatives whose "deeply held convictions" disqualify them from the bench. What kind of convictions might Schumer regard as "deeply held"? The right to life and the defense of marriage come to mind. Religious freedom is another.

If Mike Lee is nominated to the Supreme Court, the liberals cannot fail to fight his nomination. Their ultra-left base would not allow them to sit out this nomination.

Sen. Lee is young, smart, and (worst of all from the liberal perspective) as genial as our late great "Nino" Scalia.

From our pro-life perspective, Mike Lee is the son of President Reagan's loyal Solicitor General Rex Lee. It was Rex Lee whom Ronald Reagan sent up the Supreme Court steps to respectfully but firmly call upon "that eminent tribunal" to correct its most tragic error since Dred Scott--the fundamentally flawed 1973 Roe v. Wade ruling. And his replacement in the Senate would be a Republican.

Schumer would doubtless trot out all the old phony charges of racism and misogyny against Mike Lee. He might try to "Bork" him. But it would not work.

Liberals claim to love Diversity with a capital D. Mike Lee would be the first Mormon on the U.S. Supreme Court. And he'd be the first member of the current High Court who did not attend either Harvard or Yale Law School. How's that for Diversity?

Best of all, Schumer would have to expend political capital fighting Mike Lee at a time when the new administration is being formed.

There are a number of Schumer's Democratic Senate colleagues up for re-election in 2018. Some of them represent states carried by the Trump-Pence ticket. Will they all march off the cliff for Chuck Schumer?

Schumer wants to fight eight appointees to the Trump Cabinet.

He cannot do that and battle a Mike Lee nomination at the same time.

He who defends everything defends nothing, said Frederick the Great. It's equally true that he who attacks everything attacks nothing.

By nominating Sen. Mike Lee, the fights over Cabinet appointments would of necessity take a back seat.

The American people were disgusted by the liberal assaults on that good and decent man, Sam Alito. Those vicious tactics sent Mrs. Alito from the Senate Hearing Room in tears. Justice Alito was confirmed easily after liberals overplayed their hand.

Few things could so unify pro-life ranks, the Tea Party, and various factions of the Republican Party as the early nomination of Mike Lee and his quick confirmation.

Let's have a victory we can all celebrate: Mike Lee for Supreme Court!