The Cold Month That Warms the Heart

Robert Knight
|
Posted: Feb 11, 2020 12:01 AM
Share   Tweet
The opinions expressed by columnists are their own and do not necessarily represent the views of Townhall.com. 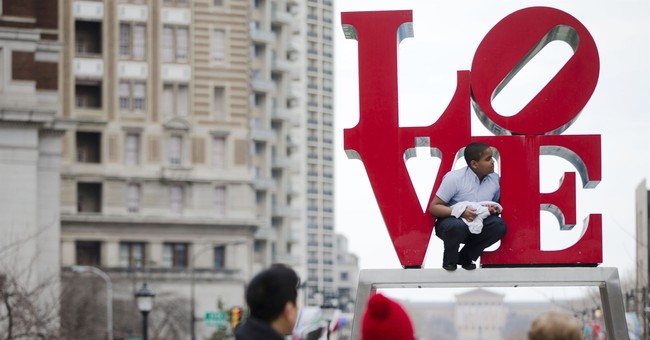 June may be more famous for nuptials, especially outdoor ceremonies.

However, February is hands-down the most marriage-and-romance-centric month.  It’s National Wedding Month, has National Marriage Week (Feb. 7-14), and, of course, Valentine’s Day (Feb. 14).

So, break out the roses and chocolate.

Valentine’s Day is named after a Christian saint who was most probably martyred on Feb. 14, 269 A.D. for marrying Christian couples in defiance of a Roman government edict, and for assisting persecuted Christians.

Today, as with many traditions in Western culture that had a Christian origin, Valentine’s Day has broadened into a secular festivity, boosted by major marketing of all things romantic, such as cards, flowers, chocolates and jewelry.

Its ties to marriage itself are still strong, epitomized by the happy endings in Hallmark romance movies.

Without marriage, nothing works. It’s the key to stability, peace, wealth and progress. We tamper with it at our great peril. The welfare state’s shattering of marriage-based families in the inner cities and the chaos that followed is perhaps the most glaring evidence of marriage’s importance.

Marriage-based family life is the organizing principle behind all civilized cultures. It brings the sexes together in a unique legal, social, economic and spiritual union. Because it’s indispensable, societies have accorded it various protections and privileges not granted to other types of unions.

No other relationship transforms young men and women into more productive, less selfish, and more mature people as husbands and wives, and fathers and mothers. No other relationship affords children the best economic, emotional, and psychological environment.  At the core of marriage are the manifold and complementary differences between the sexes – between masculinity and femininity.

Marriage-based kinship is essential to stability and continuity. A man is far more apt to sacrifice to help a son-in-law than some unrelated man who lives with his daughter. Kinship imparts family names, heritage and property.

It secures the identity and commitment of fathers for the sake of their children, and it entails mutual obligations to the community. Even without children, marriage is a societal good, as the two sexes form a unique bond and provide social stability.

The term “marriage” for thousands of years has referred only and specifically to joining people of the opposite sex in a permanent union. Until very recently, staging a bride-less wedding or one without a groom would have been the height of absurdity, not a “civil right.”

That changed in 2015 when five U.S. Supreme Court justices created the heretofore unknown “constitutional right” to same-sex marriage in their Obergefell ruling.

Since then, a majority of Americans supposedly has gone along with the radical transformation of marriage, according to surveys.  But this doesn’t mean they’re happy with it or agree with it.  Because of the aggressively enforced PC culture, few people want to admit to having traditionalist viewpoints.

In any case, it would behoove anyone who seeks understanding on any moral matter to check out God’s Word – the Bible.  Understanding the Biblical view on virtually any topic requires a look at Genesis, where God reveals His plan for humanity, including marriage and family.

Genesis 1:27 states: “So God created man in His own image; in the image of God He created him, male and female He created them.”

In Mark 10: 2-12, Jesus cited Genesis 2:24 while strengthening the moral law regarding divorce.

Dr. Robert A. J. Gagnon of Houston Baptist University notes the unanimity of the Old and New Testaments regarding the complementarities of the sexes:

“Indeed, every narrative, law, proverb, exhortation, poetry, and metaphor in the pages of Scripture that has anything to do with sexual relations presupposes a male-female prerequisite for sexual relations and marriage.”

Likewise, the pagan philosopher Confucius (551 to 479 B.C.) wrote that marriage is “the foundation of government,” and that, "It is said in the Book of Poetry: 'A happy union with wife and children is like the music of lutes and harps.”

Marriage can rapidly turn a boy into a man, as he first commits to protecting and supporting his wife, and then his children and grandchildren. Likewise, a solid marriage affords women the security in which they can thrive while maturing and giving unselfishly to their husbands, children and communities.

Grandparents, one ring ahead on the growing trunk of the family tree, provide even more richness to the family. Marriage and the family’s continuity through the generations is celebrated throughout the Bible.

Proverbs 18:22 says: “He who finds a wife finds what is good and receives favor from the LORD; Proverbs 31:10 says a virtuous wife’s “worth is far above rubies.”

One of the most unfortunate modern myths is that relationships work if each spouse meets the other halfway. But they work best when husbands and wives each give 100 percent, not totaling up a relative exchange while “looking out for No. 1.”

Grace – undeserved mercy – is at the heart of Jesus’ love for humanity, and grace is what makes a good marriage work. God gave us marriage because He loves us and wants us to thrive.

That warm thought should help get us (especially in northern climates) through the frosty month of February – and beyond.