Some Scary Lessons From History

Robert Knight
|
Posted: Aug 13, 2019 12:01 AM
Share   Tweet
The opinions expressed by columnists are their own and do not necessarily represent the views of Townhall.com. 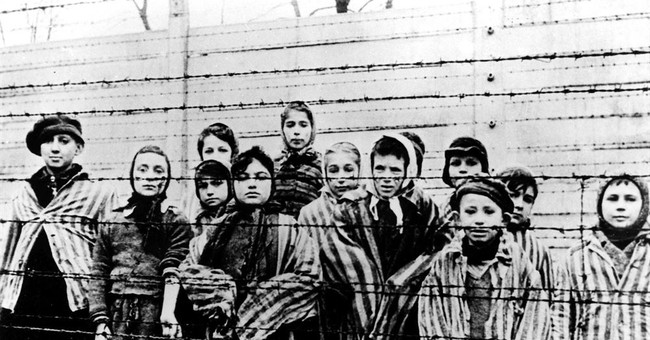 According to social media rules, the first person in an argument to bring up Hitler or Nazis loses.

Hitler may be overused as shorthand for evil, and name calling is stupid, but this unbending rule would mean we can never impart lessons learned from the rise of Nazi Germany.

That would be a terrible mistake, and it’s how the Left would like it.  They want us to forget what National Socialism, Fascism and Communism – not to mention Antifa – have in common.  They all spring from the poisoned root of Marxism.

Today, we ignore extreme rhetoric and thuggish threats at our own risk, the way Germany’s Jews tried to do before it was too late.  They were told the Brownshirt menace was a phase that would pass. Just a few hotheads.  The political cartoons depicting Jews as fools, rats and malignant traitors would also go away as people of good will saw through them.  (For details, see William L. Shirer’s “Rise and Fall of the Third Reich.”)

We are not remotely in a similar situation, thank God.  The point is that relentless demonization, if unchecked, can lead to intimidation and violence.  The Left today is demonizing Christians, white people, conservatives and anyone supporting President Trump.

Having lost the economic argument and any reasonable grounds for impeachment, the Left has made “racist America” their boogeyman, as epitomized by a “racist” president.  All social ills begin with America’s original sin of slavery, and the United States is still a terrible, white supremacist society.

The rule of law? The Constitution? The Declaration of Independence? National borders?   All just tools of the white, largely Christian, male, racist America that must be overthrown for the common good.   Never mind that millions of women and minority Americans are freedom-loving, productive citizens who are patriots and also happen to own guns.

If you believe that President Trump is as evil as depicted nonstop by CNN and other media, then you may start thinking that violence against him and his supporters might be justified.  After all, Joe Biden, Cory Booker and Robert DeNiro have all openly fantasized about beating him up.

On Wednesday, Beto O’Rourke, who is from El Paso and calls for open borders, tweeted:  "22 people in my hometown are dead after an act of terror inspired by your racism."

Then there’s “The Hunt,” which was slated for release in late September before it was pulled. “The violent, R-rated film …follows a dozen MAGA types who wake up in a clearing and realize they are being stalked for sport by elite liberals,” The Hollywood Reporter wrote.

On July 21, after President Trump pointedly criticized the four leftist Democrat freshpersons known as The Squad, Sen. Booker, told CNN that Trump is "literally fanning the flames of racial violence" and that the president's remarks were "clearly bigoted, vile, dangerous."  The same went for Mr. Trump’s criticism of Rep. Elijah E. Cummings’ Baltimore district as crime ridden (which it is) and rat-infested (which it is). But truth is no defense.

On August 6, the New Hampshire state chair for the Booker campaign, tweeted:

“Donald Trump is planning to hold a rally in Manchester. As we’ve seen repeatedly over the last few years, these rallies serve as a breeding ground for racism and bigotry that inspire white nationalist attacks like the one in El Paso on Saturday. … That is why Trump must cancel this rally.” So, only Democrats get to hold rallies.

No mention of the Dayton, Ohio, mass murderer, a leftist who admired Sen. Elizabeth Warren.

But it’s not enough to assail the president; the whole country is evil. Speaking at Charleston’s Emanuel African Methodist Episcopal Church, where a white supremacist murdered nine black people in 2015, Sen. Booker threw gasoline on the race fire, lamenting white supremacy, which he said was “ingrained in our politics since our founding.”

“Racist violence has always been part of the American story, never more so than in times of transition and times of rapid social change,” he said.  “There is no neutrality in this fight. You are either an agent of justice or you are contributing to the problem.”

So, the black-hooded Antifa thugs are “agents of justice,” while 63 million people who voted for Donald Trump are irredeemable white supremacists?

Rep. Joaquin Castro (D-Tex.) tweeted on August 5 the names of 44 constituents in his district that donated to President Trump’s campaign and were “fueling a campaign of hate.”  It’s the same tactic used after California’s Prop. 8 marriage vote in 2008. LGBTQ activists exposed donors’ names and addresses on a Google map so they could harass them.

“Rules for Radicals” author Saul Alinsky counseled activists to accuse their opponents of what they themselves do.  And to make it highly personal.  The shrill, radical chorus of haters cries “hate,” “racism” and “white supremacy” for a reason.

It intimidates people who might be inspired to oppose their plan to transform America into a place where people shut up and submit if they know what’s good for them.