Robert Knight
|
Posted: Aug 22, 2017 12:01 AM
Share   Tweet
The opinions expressed by columnists are their own and do not necessarily represent the views of Townhall.com. 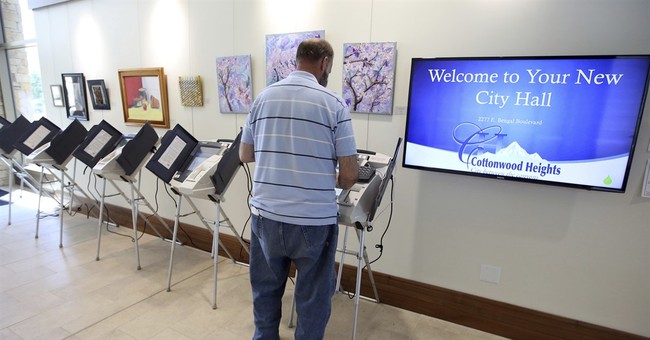 In 1993, when President Clinton signed the National Voter Registration Act (NVRA), its boosters claimed that it would solve, once and for all, a plethora of problems plaguing the nation’s voter registration rolls.

However, like many ballyhooed efforts, the Motor Voter Law, as it is best known, resulted in an even crazier system, with such absurdities as millions of people registered in more than one state and cemeteries full of active “voters.”

Although Motor Voter has a provision requiring jurisdictions to keep voter rolls up to date and accurate, many election officials openly flout it, which is why the American Civil Rights Union has been suing counties from Texas to Florida over their dirty voter rolls.

Now comes the Left’s latest “solution,” which they call automatic voter registration (AVR). The idea is to enroll everyone by their 18th birthday, whether they want to be in the system or not.

In a recent column in The Hill, two academics – Kenneth Cosgrove of Suffolk University and Nathan R. Schrader of Milsaps College – make the case that President Trump’s Election Integrity Commission should embrace automatic voter registration. They say that, among other things, AVR would improve the accuracy of voter rolls.

Having the feds collect all the data “would lead to greater security but would not impinge on personal freedoms or create a national identification card, a legitimate concern of many civil libertarians,” the good professors assure us.

You don’t have to be paranoid to believe that the government has a thing for collecting every bit of data on us that it can use for whatever purpose it deems necessary.

Under AVR, individuals are automatically added to voter rolls when they apply for a driver’s license or state identification card at the state’s licensing office or other agencies.

In many cases, AVR does not require proof of eligibility to vote and does not allow voters to decline to register until days or weeks later. Often, there is no verification of citizenship or other qualifications prior to registration. Well, so what? The more the merrier!

Eight states, plus the District of Columbia, have enacted such laws. They are Alaska, California, Colorado, Connecticut, Oregon, Rhode Island, Vermont and West Virginia.

In Oregon and Colorado, they compound the problem by mailing ballots to everyone on the voter rolls, whether they are active voters or not. Scenarios for abuse abound. Think about a multi-resident house near a college where students come and go each semester while ballots pile up in their mailbox. How hard would it be to collect them and vote in someone else’s name?

There are millions of outdated and inaccurate voter registrations across the country, and automatic voter registration will worsen the problem. Under AVR, people could be registered in multiple locations without their knowledge simply because they interacted with a government agency.

Proponents tell us not to worry, that everyone will be tracked via their Social Security numbers and that state election offices will be told if someone moves out of state. The whole thing will be conducted with the efficiency of, oh, the Veterans Administration.

Here’s something else to think about it: A centralized federal database will, in effect, supplant the 50 state databases now operating under the Constitution’s Article I, which assigns voter qualifications to the states.

Anyone suspicious of Washington amassing even more power to itself has reason to worry. It’s one thing for U.S. agencies to cooperate with requests for data in order to keep county and state voter rolls accurate. It’s recommended under the NVRA. But it’s another for the feds to say, don’t bother; we’ll do it all for you.

Mandatory voter registration also tramples on individual freedom. Not everyone wants to show up on a registration list or even to vote. In a free country, that should be a citizen’s option. Plus, voter rolls are public and easily accessible, so there are privacy concerns.

But here’s the bottom line: When the Left proposes something that supposedly will enhance “democracy,” it inevitably winds up expanding government, which, in turn, winds up “needing” to further fleece already-overtaxed citizens.