Anarchy and Its Cure

Robert Knight
|
Posted: Feb 07, 2017 12:01 AM
Share   Tweet
The opinions expressed by columnists are their own and do not necessarily represent the views of Townhall.com. 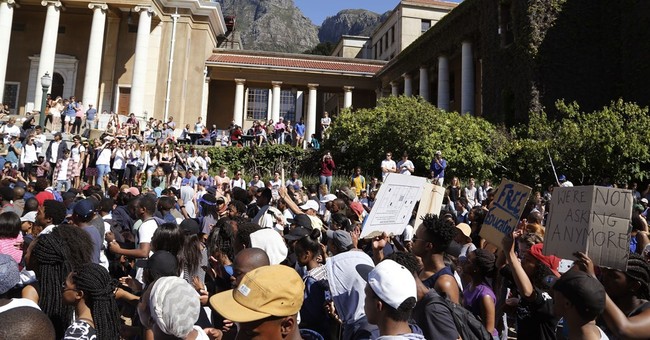 There is street violence, like that at the University of California at Berkeley last Wednesday, a microcosm of the anti-Trump rioting all over the country.

A mob protesting a planned speech by Breitbart writer and self-styled iconoclast Milo Yiannopoulos turned ugly as 1,500 gathered.  Some were coaxed there by Occupy Oakland, whose website called for people to “Shut Down Milo at UC Berkeley.”

Some protesters wore black, used paramilitary tactics, threw bricks and fireworks at police, committed vandalism, and started a fire.   Two hours before the speech, the college administration pulled the plug.

But the mob was not done.  “Even after the event’s cancellation, hundreds of protesters spilled off campus into the city streets, where the violence continued as they confronted drivers, engaged in fights, smashed storefront windows and set fires,” the San Francisco Chronicle reported. Several of the “fights” were beatings of suspected Trump supporters.

That evening, Occupy Oakland’s twitter feed proclaimed:  “We won this night. We will control the streets. We will liberate the land. We will fight fascists. We will dismantle the state. This is war.”

Bear in mind that U.C. Berkeley is where anti-war leader Mario Savio and others launched the Free Speech Movement in 1964.   They wanted to lift a ban on campus political activities and demanded freedom of speech and academic freedom.  Today’s leftists apparently don’t see any irony in shutting down a speaker at Berkeley with whom they disagree.

That would include a dozen faculty members who signed a letter calling for cancellation on the grounds that students might be subjected to “harassment, slander, defamation and hate speech.”

Of Mr. Yiannopoulos, a young woman interviewed by a TV station after the riot said, “His words are violent, or a form of violence.”  Another smugly proclaimed, “The power of the people has spoken.”

In the upside down world of leftist activism, speech is violence while actual violence is an appropriate response.

Another form of anarchy is the violence done to language in the name of ideology.  Without common understanding of the meaning of words, we cannot communicate, much less engage in meaningful dialogue.

The enemies of civilization in America figured out long ago that they could control debates by controlling language.  In order to avoid the smear of “extremism” and to get along, most people reflexively adopt the new terms.  You know, turning homosexuality into “gay,” abortion into “choice,” gambling into “gaming,” smut into “erotica” and government spending into “investments.”

One reason that Donald Trump evokes such fear and hatred among progressives is that he avoids politically correct phraseology.  It’s not that he didn’t get the memo; he tore it up and sent it back in tiny pieces.

Now onto moral anarchy.  It’s the logical destination for a culture where words no longer mean what people know they mean and truth itself is abandoned.

The latest exemplar is the Boy Scouts of America. Despite winning every court case over defense of their values, they caved to corporate and media pressure in 2014 to allow homosexual boys.  In 2015, they actually opened up Scout troops to homosexual leaders. Now, they are accommodating girls who tragically think they are boys.

This is not just an adjustment to modern trends. It’s a complete surrender of their raison d’etre, which is to raise boys to be men.  Here’s Christian blogger Matt Walsh’s take on the Scouts:

“You’d made every concession demanded by the LGB, now it was the T’s turn. They didn’t have to fight too hard. You were already on your knees, groveling and whimpering. You’d already decided to abandon the ‘keep myself morally straight’ part of the Scout oath. Why not dispense with the rest of it? Why not utterly dismantle everything that has defined you for over a century? Why not defeat the entire purpose of your organization for the sake of an infinitesimal fraction of the population? … Well, I can think of a few reasons why you shouldn’t: logic, sanity, decency, reality, morality, etc. But you’d punted those particular footballs a while ago. So here we are.”

Fortunately for America’s boys and their parents, a new organization has risen that is keeping the Scouts’ original promise and even strengthening its Christian roots.  Trail Life USA, headquartered in Greenville, SC, and now in 48 states, offers everything Scouting has, minus the political correctness and cowardice.

A few days ago, Trail Life unveiled the Respect Life trail badge. Boys will “learn by action” how to “stand for the unborn, sick and helpless…. Adopting a Christian worldview backed by science, the badge encourages a critical look at cultural assumptions about the value of life with emphasis on man’s creation in the image of God.”

The mobs at Berkeley and the go-along-to-get-along leadership of the BSA might regard themselves as the vanguard of a cultural revolution, but they’re just peddling their own forms of anarchy. While they drift into nonsense, a quiet revolution is taking shape below the radar that aims to reestablish respect for the permanent things of faith, family and freedom. Not to mention sanity.