Robert Knight
|
Posted: Feb 02, 2016 12:01 AM
Share   Tweet
The opinions expressed by columnists are their own and do not necessarily represent the views of Townhall.com. 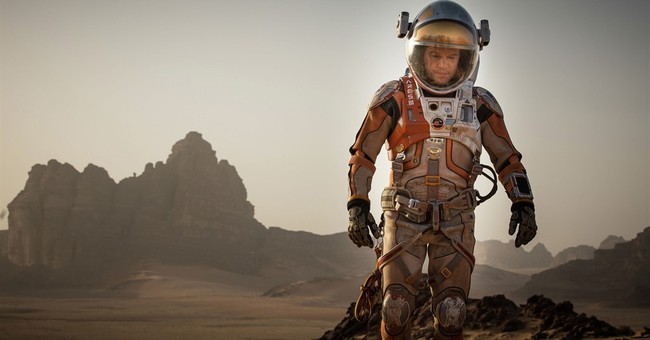 Holed up during the Blizzard of 2016, I was a grateful recipient of our DVD-collecting neighbor’s brand new copy of the Matt Damon film “The Martian.”

Unlike Mr. Damon’s stranded astronaut Mark Watney, I was marooned with family and good neighbors, and lacked for nothing. We didn’t even lose power.

“The Martian” is a fine video for people suffering from the lesser affliction of cabin fever. It’s set in stark isolation. As the snow piled up past 30 inches with drifts resembling sand dunes amid strong winds, we identified in a small way with Watney’s separation from the rest of humanity.

A showcase for NASA and space exploration, plus digital wizardry, the film is about the value of a single human life and a community that may or may not move heaven and earth to come to the aid of one of its own. If that’s a spoiler, sorry, but not to worry: I won’t reveal the end.

The film is not perfect. Along with suspense and impressive visuals, there’s a politically correct whiff of One-Worldism, gratuitous profanity, and the near-worship of science. Speaking of worship, the God Who created this fantastic universe gets only a brief mention with a reference to the faith of another astronaut who leaves behind a crucifix. Watney partly dismantles it to acquire material for one of his many brilliant, MacGyver-type improvisations.

Somehow I don’t think the scene was done to offend believers. I can easily see God giving grace to a desperate person who burns the pages of a Bible just to stay alive in a tundra.

We also made use of our shut-in time to watch life-affirming episodes of “Blue Bloods,” the New York City drama with Tom Selleck as Commissioner of Police. He’s a widowed father in a big, fiercely loyal Catholic family. With all the attacks on police in the news lately – real and verbal – “Blue Bloods” is a well-crafted reminder that cops are real people who put their lives on the line every day. They even do it for people who heap abuse on them.

As with Mark Watney’s touchingly supportive space community, the cops rally round their wounded comrades. They also weed out the bad ones. It also doesn’t hurt that the Commissioner is Frank Reagan, a reminder of when we had a strong president who celebrated and embodied traditional American ideals, including the value of every human life.

Cultural support for the pro-life viewpoint is paramount in a society where science is advancing quickly toward outcomes that occur because we can do them, not because they’re morally right. As C.S. Lewis observed, every new power gained by man is also a power over man; people will always find ways to abuse it.

People also will rationalize rather than face facts. When I was a news editor years ago at the Los Angeles Times, a fellow editor’s wife was in the late stages of pregnancy. We had tussled over the abortion issue a few times. He favored allowing the “procedure” right up to the point of birth, contending that the baby was not human until it actually was out and breathing. So I pressed him, asking if he really believed that his child, about to be born, was not human. With a straight face, he said, “No, it’s not.”

Really? Even while coming down the birth canal? Still not human? “No. Not until it’s born.” His face gave away his real feelings. He may now be a doting father, and I hope he is.

Never underestimate the power of denial when it comes to the culture of death’s sacrament of abortion. Without it, the sexual revolution‘s false promise of consequence-free sex would crash and burn.

For those who want to impart the pro-life message at an early age, and without all the violence that saturates even many redemptive Hollywood movies, Dr. Seuss’s “Horton Hears a Who” is an excellent primer. Bucking his disbelieving neighbors, the elephant Horton becomes a fierce protector of the microscopic city of Who-ville, insisting that, “A person’s a person, no matter how small.”

Or, no matter how far away, as “The Martian” vividly illustrates.