The Lure of Something for Nothing 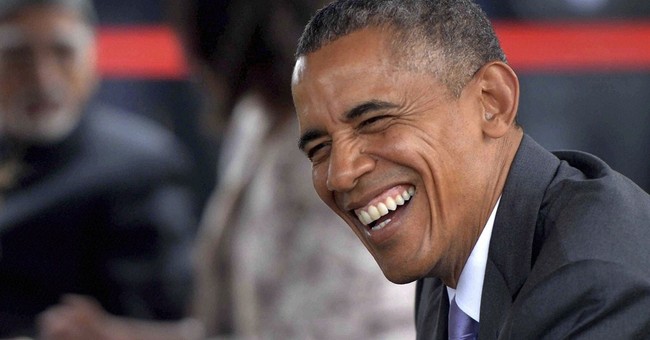 And we thought Bill and Hillary were good at class warfare and stoking envy.

President Obama makes the Clintons look like Barry Goldwater. Fresh from offering “free” health care, “free” phones and “free” food to the masses, he’s upped the bribery to “free” community college tuition and “free” childcare. It’s not that the Clintons oppose any of this; they just need to affect moderation in case Hillary runs for president and has to knock back boilermakers again with the good old boys in Pennsylvania taverns.

Since someone has to pay for these expensive new entitlements to the Free Stuff Army, Mr. Obama has proposed yet another “tax the rich” scheme that, if enacted (which is unlikely) would eventually plunder working-class families. To liberals, that’s what tax “reform” is all about.

Over a few decades, the U.S. government has morphed into a gigantic income-redistribution machine, the ultimate mugger.

Since the New Deal, the only serious challenge to the mentality of plunder in both major parties came during the Reagan Administration. To true believers like Mr. Obama, the Reagan years were a speed bump on the way to transforming America, and something to pretend to admire to keep the suckers ignorant.

Government is necessary because men are not angels. Its legitimate role is to secure justice by punishing evil-doers and to protect property and individual rights. Government does other things, such as delivering mail and public works – roads, water, sewage, etc.

But its main focus has become redistribution of wealth in the name of “compassion” and “equality.” Its sheer growth and trillions of dollars of debt coincides with the rise of the Free Stuff Army, whose ranks have swelled exponentially with Mr. Obama’s edicts and economic malaise.

In 1850, faced with a tide of sentiment toward socialism, French legislator Frederic Bastiat confronted the left’s claims of government superiority with a timeless critique, The Law. In fact, after the Bible, C.S. Lewis’s The Screwtape Letters, and Shakespeare, The Law is arguably the most penetrating analysis of human nature. Bastiat began by echoing truths about God and man that animated America’s founders:

He then explained why governments inevitably fall into redistribution:

“Now since man is naturally inclined to avoid pain — and since labor is pain in itself — it follows that men will resort to plunder whenever plunder is easier than work. …When they can, they wish to live and prosper at the expense of others. This is no rash accusation. Nor does it come from a gloomy and uncharitable spirit. The annals of history bear witness to the truth of it.”

As such, it is easy to succeed by promising something for nothing -- the politicians’ mantra. A modern, liberal fiction is that government officials are somehow immune to human foibles such as greed. They are nicer than we are – as long as other people pay for it. The system they have built is functionally Marxist, deploying government force to extract “from each according to his ability to each according to his needs.”

Armed with an accurate view of human nature, America’s founders did their best to insure that man’s worst tendencies would not lead to tyranny and that man’s God-given talents could flourish. But they apparently underestimated the power of something for nothing.

The forces cultivating personal responsibility are the church, the family and the American spirit of liberty, all of which liberals have targeted in a relentless culture war. If you still think the drive to legalize same-sex “marriage” is about marriage, you haven’t been paying attention to the left’s war on truth, normalcy, privacy, religion and – ultimately -- freedom. Not satisfied with plundering our wallets, they are plundering society’s moral capital.

If the Supreme Court does the dirty deed and institutionalizes a counterfeit, it will force tens of millions of Americans to lie. More power will accrue to those who expand the enforcement machinery of “equality” into all areas of life. Resistance to big government will cost far more than it does now.

Leading the charge in this radical remaking of America is Barack Obama, the General of the Free Stuff Army, which grows as the moral foundations crumble.

Mr. Bastiat perhaps had someone like him in mind when he wrote 165 years ago:

“There are too many ‘great’ men in the world — legislators, organizers, do-gooders, leaders of the people, fathers of nations, and so on, and so on. Too many persons place themselves above mankind; they make a career of organizing it, patronizing it, and ruling it.”